League of Legends: An introduction to “Clash”

Have you ever wondered what it’s like to play like a pro? To test your skill against the best competition and participate in tournaments where everything is on the line? That day is finally here. League of Legends‘ new “Clash” mode brings the tournament to you. Complete your placement matches and bring your best game face, because anybody can play.

Introduced as a competitive tournament for all, Clash gives players the chance to make their own teams and compete for the “Demacia Cup”, regardless of their personal ranks. You could be a Master tier player desperate to make a name for yourself and break into the big leagues, or you could be a weathered veteran of the deepest depths of Bronze. Everybody is invited, and everybody has a chance.

Before you can compete, you need a rank in any Summoner’s Rift queue and have a minimum Honor Level of 2. This means that you need to have completed the minimum of 10 placement matches in any of the ranked queues and that no toxic, boosted animals are allowed.

In an effort to battle smurfing, Riot also requires that you verify your account through SMS. You need to use a cell phone and the number you choose will be linked to your account for 6 months. Team captains will receive a notification if one of their players fails to meet the requirements.

Only one entry ticket is required to participate but you also have the opportunity to use five tickets for a premium entry. Premium entries come with upgraded rewards. Each player in a team will select their own method of entry, so you are not obligated to match what your teammates select.

Your entry ticket is good as long as you keep winning. If you lose a match, your team will need new entry tickets to participate the next day. Salty? Don’t be. Re-entering the Clash grants additional orbs and capsules.

Getting the Band (Back?) Together

Like the traditional game, Clash is played in teams of five. Team captains can create a team, choose a team name and logo, and invite players using the Clash tab found in the League of Legends game client. Choose your players wisely; once rosters are locked for the first game, players cannot be kicked or change teams. The same five players must remain together for the entirety of the tournament.

Each player in your team is assigned a rank on a scale from Tier IV (lowest) to Tier I (highest). Your rank is determined by your previous Clash history and your personal Summoner’s Rift ranking. Your team is then ranked using a weighted average of all five players, with the heaviest consideration given to the best player on the team. Are you a Diamond player thinking about carrying four Bronze friends? That’s probably not a good idea, because your opponents will be closer in rank to you than your unluckier teammates. 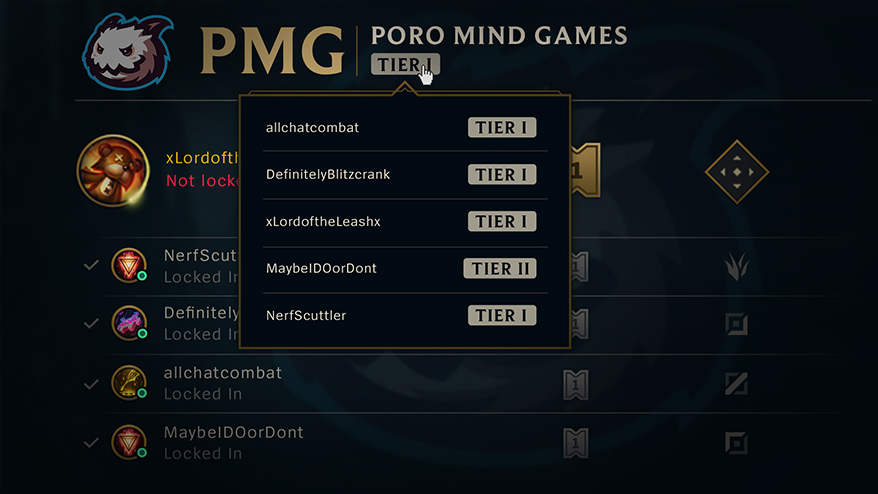 Riot will be cracking down hard on smurfing throughout each iteration of Clash. If you are caught trying to game the system by playing on a lower-ranked account, you will be banned from participating in any future Clash tournaments and will lose any Clash rewards you previously gained. Don’t be a dick. Play on your main.

Clash runs for three days and each day begins with a lock-in phase that opens 30 minutes before matches begin. You can enter the tournament at any point during lock-in but matches begin immediately once the thirty minutes are up. Teams that miss the cut will not be eligible to participate on that day. Don’t be late.

Once lock-in concludes, you’ll be matched into a bracket and you will have seven minutes to scout your opponent. You will gain access to key information like which side you’ll start on and which champions your opponents perform best on. Pay attention, because the scouting phase will offer crucial insight on the upcoming champion select.

Clash is where one-trick-ponies go to die; be prepared to have some fallback options in the event that your 60% win-rate Blitzcrank jungle pick gets taken away. 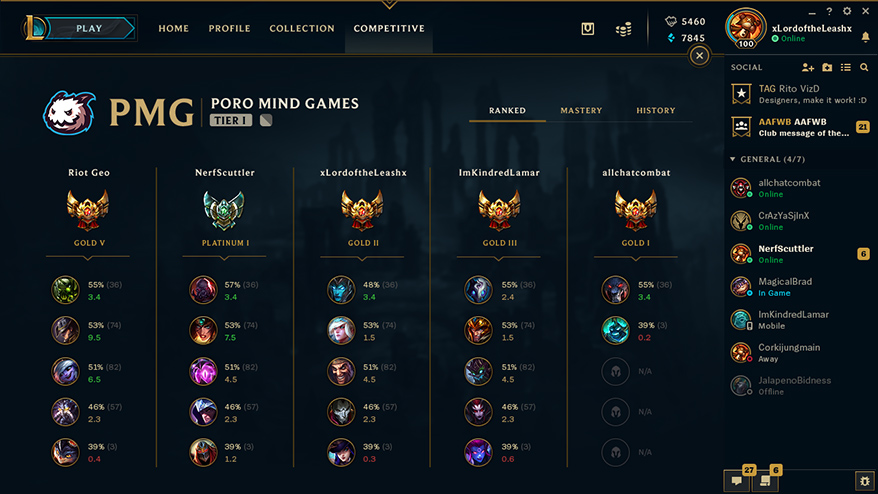 The “Champion Select” phase begins as soon as the scouting phase concludes. Clash uses the same champion select structure as the LCS which means that each team has two ban phases and two pick phases. All five bans will be submitted by the team captain. Furthermore, all champions are unlocked in Clash. Players can select any champion in the game without having to worry about screwing up a trade scenario.

Additionally, players that forget to lock-in their champions or accidentally disconnect from champion select are protected by a fail-safe. If the time for your selection expires, you will be assigned the champion you last hovered. If you didn’t make a selection at all, you will be assigned a random champion. This mechanic allows both teams protection against accidents, AFKs, and queue-dodging.

Going Through the Gauntlet

Each day of the tournament consists of a single-elimination bracket against teams with a similar skill level to yours.

It’s up to your team to choose which days of the competition you want to participate in. If you win on Day 1, you can skip Day 2 and still participate in an 8-team bracket on Day 3. Additionally, losing does not mean that your Clash journey is over. Teams that lose the first game on any given day will be entered into a consolation bracket where they can win additional rewards. Any team that suffers a loss also has the opportunity to enter a new bracket on the following day.

Because the final trophy and the highest reward tiers require three straight days of progression, if you lose at any point, or if you choose to skip a day, you will not be eligible for the grand prize.

As mentioned earlier, every Clash participant will at least take home an exclusive Clash orb or capsule. You will also acquire Victory Points (VP) for every match you win. The base reward for a win is 200 VP, with escalators for higher tiered teams and for players using premium entry tickets. VP accumulates over two tournament cycles, unlocking logos and banners as you progress. Any banners you win will appear on Summoner’s Rift any time you’re in game, as well as on your player profile in the client.

Finally, the rarest rewards available through Clash are Trophies. These can only be obtained by winning a bracket. Trophies are displayed by the nexus in every Summoner’s Rift game that you appear in for a two week period, and the trophy is stylized to depict your team’s tier and the level of the bracket you won. 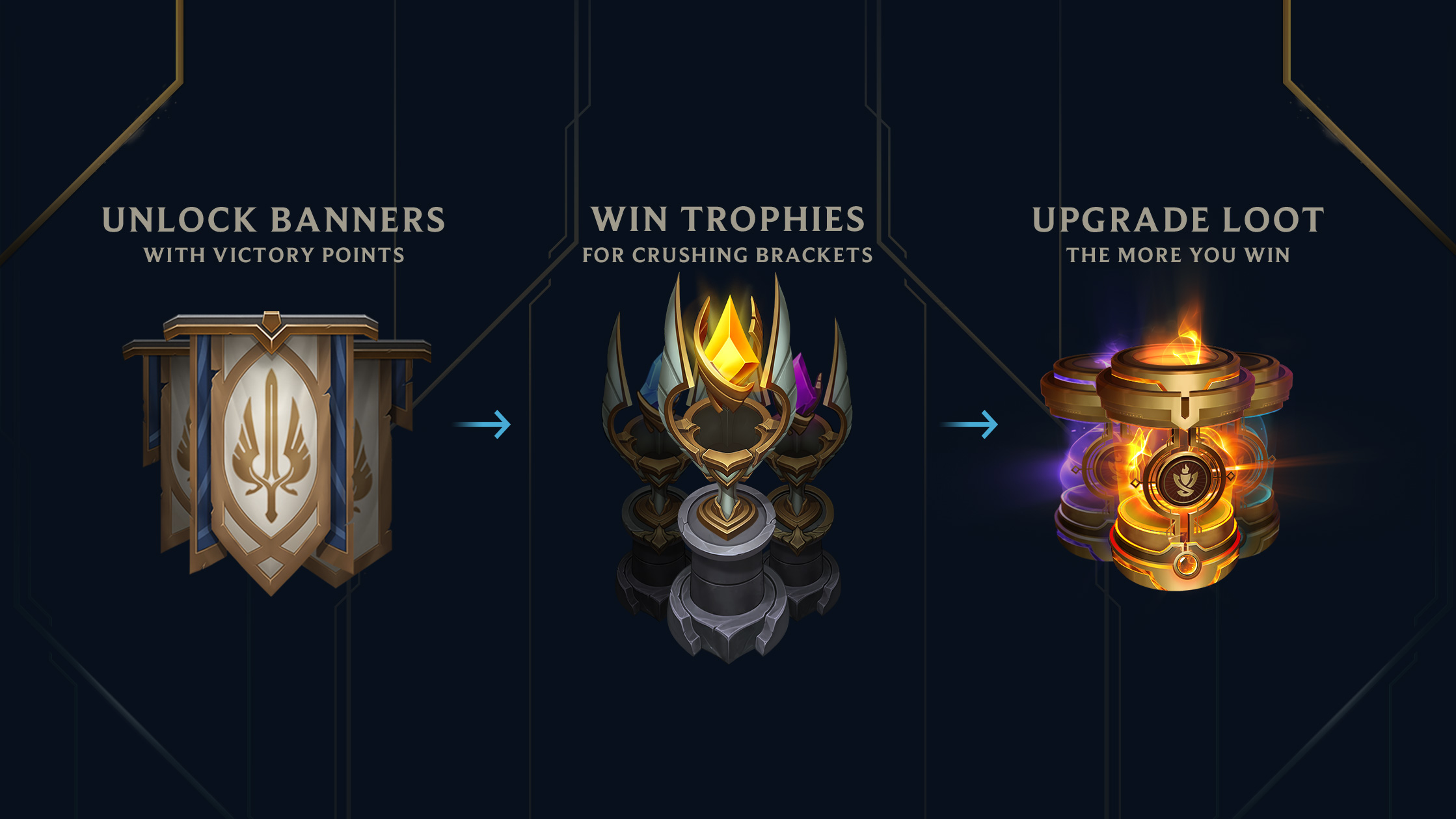 For a deeper look at Clash and for details on roster substitutes and the “sudden death” feature in Clash games, read Riot’s full breakdown here.

Looking for that extra little edge in Clash? We’re giving away $350 worth of HyperX gear, and all you have to do is hit us up on facebook. Get in on the contest for your chance to snag some kick-ass peripherals before it’s too late. Read the full post here.