What is Mortdog Madness Reckoning and how to watch

TFT Reckoning is almost here and its time for Mortdog Madness Reckoning.

Image provided by Giant Slayer The 16 player invitational will pit some of the most iconic players from around the world against each other on the Public Beta Environment to give spectators their first glimpse at what a competitive TFT: Reckoning event would look like.

Giant Slayer has announced the Mortdog Madness: Reckoning event for competitive Teamfight Tactics on April 24 and 25.

Outside of Riot-sanctioned events, Teamfight Tactics doesn’t really have any international tournaments. However, some of the international events that are put on outside of the World Championship are thanks to Mortdog in conjunction with Wisdom Media’s “Giant Slayer” brand. They put on international invitational events with bragging rights and a cash prize on the line every few months.

With TFT: Reckoning just around the corner, Mortdog thought it was time to to host another edition of Mortdog Madness. The 16 player invitational will pit some of the most iconic players from around the world against each other on the Public Beta Environment to give spectators their first glimpse at what a competitive TFT: Reckoning event would look like. The event will have a $5,000 prize pool.

Mortdog Madness: Reckoning will seed the 16 invited players into two separate lobbies. The players will rotate lobbies throughout a five game day one. Players in each game will earn points based on their placement at the end of the game. The top eight players in points after the five rounds will move onto day two.

Day two will function exactly like day one. The eight final players will be playing in one lobby with their point reset. They will play five new games in this lobby. After the end of the five final games, the player with the most points will be crowned the champion of Mortdog Madness: Reckoning.

Participants and where to watch 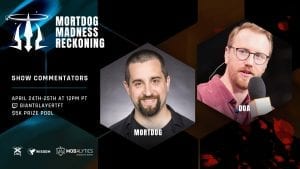 This edition of Mortdog Madness brings back the “NA vs EU” narrative in full force. Nine of the 16 players are from the NA region and the other seven players are from EU. There is a good mix of streaming personalities as well as pros in the 16 player mix. Notable players include TFT Galaxies World Champion “KC Double61”, TFT Fates NA Champion “TL Kurumx” and many more. Here is the complete list of competitors:

Each player will be streaming their own perspective of the tournament live on their respective Twitch channels. Giant Slayer will also be streaming the event with commentary from Mortdog and Erik “DoA” Lonnquist. With the event being the first for TFT: Reckoning, DoA and Mortdog will be giving spectators an educational look at all the new changes that TFT: Reckoning has to offer.