War of the Spark spoilers reveal: Commence the Endgame

We’re in the final week of Magic: The Gathering’s War of the Spark spoilers season before the full reveal on Friday. Let’s kick off the new week with a fresh one: Commence the Endgame, revealed this morning by Wizards of the Coast. Nicol Bolas is ready and Act III is upon us. 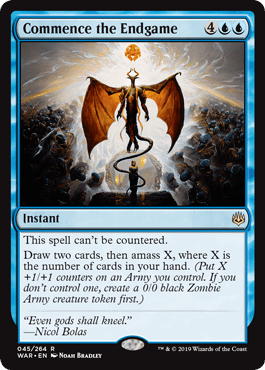 Wizards chose Commence the Endgame as the story card to break open the third and final act of the Bolas story. The art shows Nicol Bolas with an amassed army of Eternals, the Immortal Sun hovering above, as well as an unknown figure front and center, apparently under the influence of Bolas. All stunningly depicted by the artist Noah Bradley, a personal favorite of mine.

This spell can’t be countered.
Draw two cards, then amass X, where X is the number of cards in your hand.

The effect of the card is no slacker either. For 4UU, you get uncounterable card draw, as well as one of the stronger showings of the Amass mechanic so far, giving you a beater equal in size to the number of cards in your hand.

In Standard, I see Commence the Endgame being used in control and midrange decks. It’s a flexible card that functions as both a finisher and a stabilizer. It can either put up a strong defense and draw into removal to keep you alive, or put down a significant threat on your opponents end step, and draw into counterspells to protect it while you close out the game. Green-based control and midrange decks will probably prefer Hydroid Krasis for this effect, but those playing outside of those colors can now enjoy a similar effect, albeit without the evasive flying body.

Stay tuned for more War of the Spark reveals and card evaluations as we close out the final week of spoiler season!