An in-depth look at the Legend class in TFT Dragonlands

Provided by Riot Games Volibear is one of the three Legend champions in TFT set 7 Dragonlands.

Teamfight Tactics Dragonlands is finally out on the Public Beta Environment, and with it comes a ton of new champions and traits to explore. Figuring out how to play these new options to their greatest potential is difficult, but Upcomer has it covered. Despite the Legend trait being having incredible strategic depth, here is a guide on how to use it in TFT set 7.

The Legend trait is a little complicated. The three-piece class states that at the start of the round, each Legend champion consumes the closest champion. This will literally kill off three of a player’s champions each round, meaning that someone at level seven with the Legend trait active will only have four units on the board.

However, the payoff is each Legend gains the consumed champion’s stats. This means that if a Legend champion consumes a 3,000 health champion, they will gain 3,000 health. They also gain 100% of their armor and magic resist, too (though only 40% of their Ability Power).

Essentially, the Legend champions become super carries, and that is the class’ gimmick. 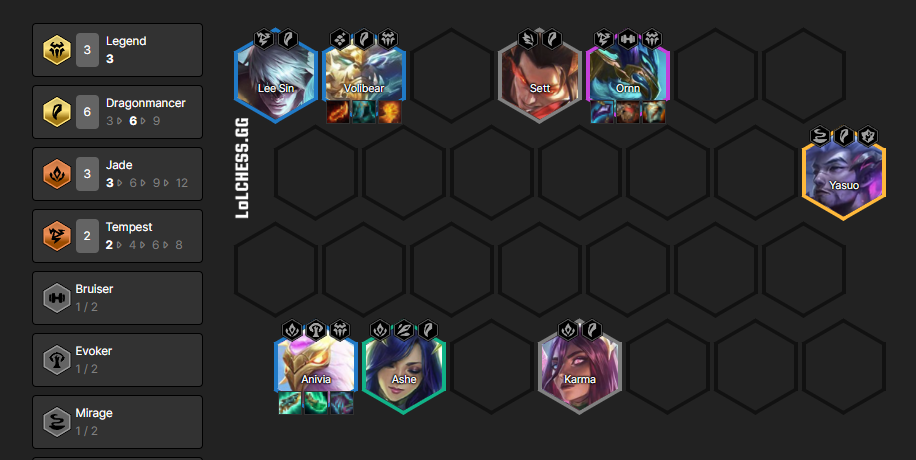 While it’s possible to have a triple threat of carry champions, those playing the Legend trait should single out one champion to be the comp’s main carry with the other do some secondary lifting. This version of the comp focuses on Volibear and his Dragonmancer class. The Dragonmancer class, when active, allows the player to pick one of those champions and declare them the “Hero.”

The Hero gains an insane amount of health and an increased AP. This bonus also scales based on Dragomancer’s star level. This is great because players will be rerolling on seven for all the three-cost and two-cost champions since the main carries are Volibear and Anivia. Coincidentally, they will be fed the three-star Dragonmancer champions for their stats.

Volibear will be nearly unkillable, but he will want to attack fast to take advantage of his every-third-auto passive ability. Also, there’s a lot of crowd control in this set, so Quicksilver is a must. Anivia will want Gunblade to keep her and Volibear healthy.