Skirmishers are also getting massive buffs

Provided by Riot Games One of the most dominant one-star carries in the game is finally being nerfed in TFT Patch 11.10.

The first patch since the release of the fifth Teamfight Tactics expansion is here. After a somewhat shaky start to the new set, Riot Games has decided to do some light work with a b-patch to put some over-tuned champions in line. However, the TFT’s Patch 11.10 brings many changes.

With over 60 champions, synergies and items being tuned, Patch 11.10 is one of the biggest in TFT history. Even though there are a few dozen changes, some alterations are going to impact the meta more than others. Here is the TFT Patch 11.10 breakdown. 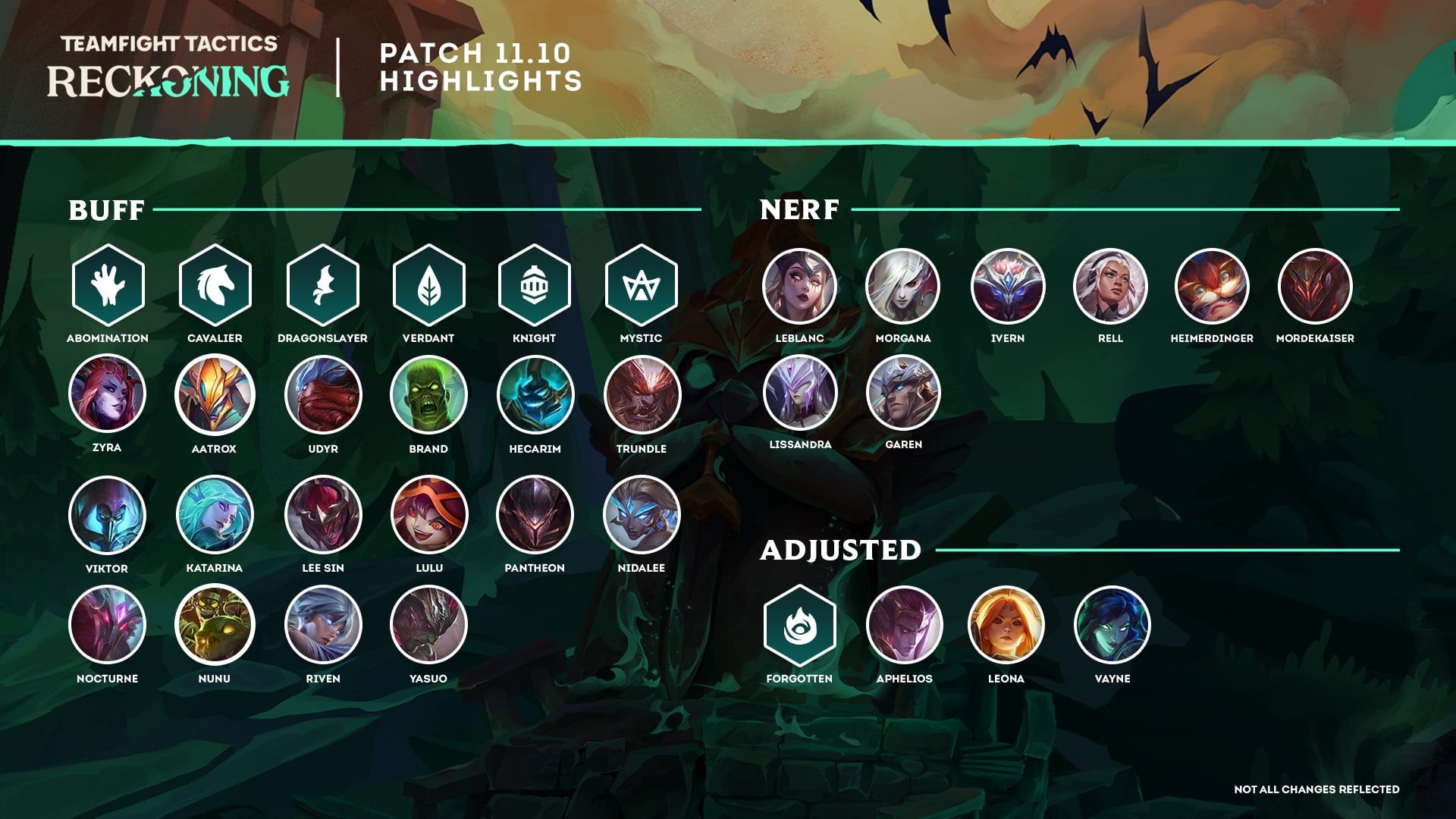 Over 60 changes are coming in Patch 11.10, making it one of the biggest in history. | provided by Riot Games

Full 11.10 Patch notes will be up in a couple hours. Here are the changes from the rundown. Otherwise everything else will match. Enjoy the patch and good luck on your climb! pic.twitter.com/weiswFeBBX

Throughout the first two weeks of TFT: Reckoning, there have been some problem champions but none as absurd as Vayne. Vayne’s strength has been so powerful that many players, throughout all ranks, have experienced lobbies where nearly every single person in their game has forced the composition that she is played in. An interesting factor is that any player can play the comp if they so desire. Even if it’s contested by every player.

This is because players only needed a Vayne two-star. A one gold unit at two-star was over-tuned to the point that players could use her as their main carry. The reason behind this is that Vayne is able to abuse one of the best items in the game with no drawback. Sacrificial Gauntlet is supposed to give a champion increased damage and crit chance on their spell, at the price of taking damage whenever they cast. However, Vayne’s spell technically doesn’t activate because its a passive ability. But, it still gives her ability the extra damage. This bypasses the entire side effect of the item.

In Patch 11.10, Sacrificial Gauntlet is being changed. The item will still work on every champion as it has been, except Vayne. Now, for the item to give the extra crit chance on each spell cast, the champion has to cast their spell. If a champion has a passive ability like Vayne, they cant cast a spell. This means that they won’t get the added crit chance. Likewise, this should make Vayne not as oppressive as before.

To make sure that Vayne stays in line, Riot is also nerfing the Forgotten trait by tuning the extra Spell Power and Attack Damage at the six champion bonus from 80 to 70. Vayne’s spell damage is getting reduced as well. Vayne may still be playable but players shouldn’t expect to win lobbies off of a two-star one cost unit anymore.

Skirmishers on the rise

In the first patch of the TFT: Reckoning meta, attack damage-focused comps stole the show for the first week of the meta. Comps like Legionnaire with Draven and Mordekaiser were dominant. And Aphelios in the Nightbringer Ranger composition destroyed lobbies too. But, the other Attack Damage focused comp, Skirmishers, has not been nearly as successful. In Patch 11.10, Riot is changing that.

There are no changes to the trait itself and the main carry of the comp, Jax, will also no be touched. The rest of the Skirmisher supporting cast is getting buffed, though. In fact, Lee Sin, Nidalee, Trundle, Pantheon and Veigo are all seeing positive changes in Patch 11.10.

The Viego change is just a bug fix to make his ability cast more efficient. However, the rest of the skirmishers are receiving significant buffs. Lee Sin is getting a HP buff and a big boost to his AP powered ability. Nidalee and Trundle are getting their ability mana reduced. And, finally, Pantheon is getting a damage increase as well.

This means that there are going to be multiple carry threats now so the comp doesn’t soley have to rely on Jax. Trundle, Lee Sin, and Pantheon, in particular, will be secondary carries that won’t need much attention in the item department to get them going. Players should look for Skirmishers to be one of the best comps in TFT’s Patch 11.10.

Before the official release, the most infamous comp on the PBE was Abomination. This was due to how the often forgotten Zz’rot portal interacted with the Abomination trait. Zz’rot portal spawns a big void ling whenever its holder dies. That’s simple enough. However, on the PBE, if a player put a Zz’Rot portal on their Abomination unit and it gave a copy of the item to the Monstrosity, the portal would spawn two void lings. The first one would obviously spawn when the original champion died. The second would spawn when the Monstrosity died. This caused game states where the sheer amount of walls were too much for any comp to stop.

Riot recognized this before TFT: Reckoning hit the live servers. Right before the official release, Riot removed the ability for Zz’rot portal to spawn on a summoned unit like the Monstrosity. In TFT’s Patch 11.10, this change is being reverted. However, it comes with a catch.

Zz’rot portal, both the cursed version and the regular, will now work with the Abomination trait again. The Monstrosity will once again summon them on death, giving the item extreme value. However, when the monstrosity dies, a nerfed version will be summoned instead. Zz’Rot portal now states that void spawns from summons are 25% effective for the regular Zz’Rot portal. The cursed version will only be 50% effective. However, the portals that are working again could push the comp back into S-tier. The trait and units are also being buffed.

The trait itself is getting a buff by making the Monstrosity stronger at the four and five champion bonuses.  Nunu’s mana cost is being reduced and Brand’s damage is being increased at three-star. Only time will tell if the comp can regain the throne that it had on the PBE. However, in Patch 11.10, Abomination will be much more viable.