Rocket League Sideswipe: How to one button fast aerial, other beginner tips

Time for some sidescrolling Rocket League

Rocket League Sideswipe tip 1: How to fast aerial with one button

Anyone who plays Rocket League knows how important it is to beat your opponent to the ball. The fast aerial helps a lot, but simply jumping and then boosting is not going to be fast enough. Of course, players may be quick with button presses, but Psyonix has actually made life easier for Rocket League Sideswipe players. There is a single button that lets players jump and boost at the same time, it’s just disabled by default. Here’s how to enable it:

First, tap the cogwheel in the main menu at the top right of your screen, then tap ‘Game Settings’ and then ‘Configure’ at the top.

In this menu, you’ll see an option marked in red. That’s the jump and boost button.

Tap it and tick ‘Enabled’. 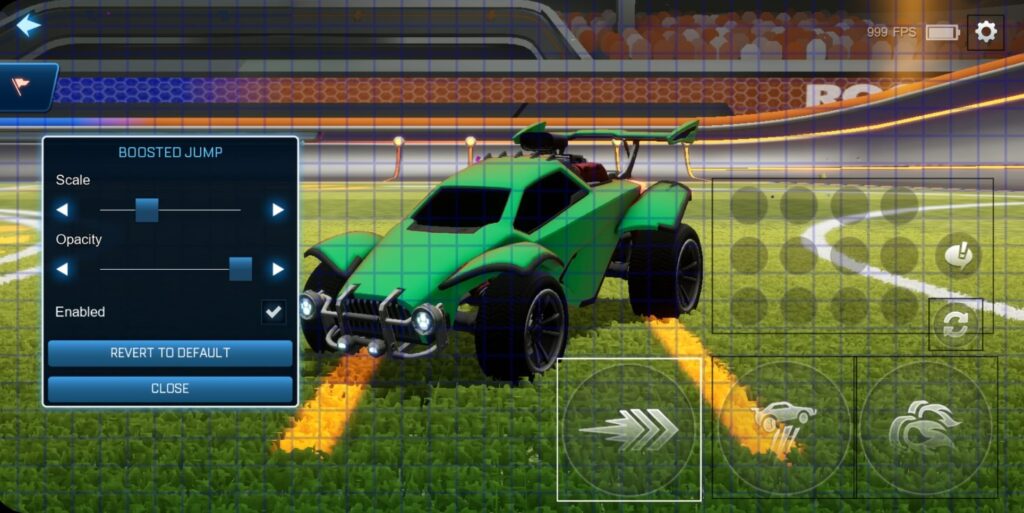 You’ll also be able to set up your UI here, so it’s a good idea to experiment and see what button locations and sizes work best for you.

Now that you’re all set up, you can jump and boost simultaneously with the single press of a button. This will allow you to get to the ball in the air faster than opponents who manually input these abilities. Test it out in free play, but be warned, sometimes just boosting or jumping is better. However, this will increase your overall speediness, which is extremely helpful in the lower ranks.

Tip 2: How to be faster overall

Speaking of speediness, don’t forget that aiming somewhere makes you travel in that direction. That means down as well. When you’re flopping around in the air with no boost waiting to land in order to get back into the play, make sure to aim down. This will make you fall faster, leading to quicker recoveries.

Tip 3: Consider playing with a controller

Mobile gaming is not for everyone, especially when touch screen controls are involved. Luckily, controllers are supported for Rocket League Sideswipe. Don’t let the vocal minority gatekeep your preferred way of playing. If you prefer playing with a controller, you can. Simply link up your controller to your phone or tablet via Bluetooth, and it’ll work. The menus are mostly still touch-based, but once you’re in-game, the controller will respond. It will also hide the controls on the UI, leading to a cleaner screen.

ngl @RLSideswipe is the most fun I’ve had in forever 😭 I honestly feel like I felt when I first started playing rocket league and GOD I missed this feeling pic.twitter.com/Y920fhjvGo

Okay, air rolling in Rocket League Sideswipe may not be as useful as in the main game, but it does look fancy. If you want to get a hang of this to impress the newbies, then starting early is your best bet. Air rolling is simple, but not explained in the tutorial: just double-tap and hold the joystick button. This will make your car start twisting even after you land and jump back up. If you want to stop rolling, simply let go of the joystick.

On controller, the button to do this is LB and L1 on Xbox and PlayStation controllers, respectively.

When it comes to strategy, just stick to the basics. Don’t ball-chase, don’t over or double-commit and rotate out after you made your play, unless there is a very clear goal-scoring opportunity that you can get to before your teammates and opponents. Also, be careful you don’t take the ball away from your teammate on your way back. It’s a 2D game after all.

If you’re in the back for the kick-off, don’t rush forward immediately. Kick-offs are volatile, especially in the lower ranks of Rocket League Sideswipe. You don’t want to speed forward as the last one back and see the ball fly over your head into your net. However, as you grow in rank, you’ll see kick-offs become more consistent. This is when you can start taking more risks. Oh, and be ready to use that fast aerial button when the ball goes up.

One final Rocket League Sideswipe tip about boost. The game is fairly forgiving for boost usage, as the map is small. Using a good amount of boost to get to the ball is fine, but consider feathering your boost as well, especially when the ball is floating slowly in the air and you have time. You don’t want to overshoot because you’re flying at the ball too fast, or be out of boost for a follow-up after your first touch. Quickly and repeatedly tapping your boost instead of holding it will keep you in the air without sending you forward too fast. This makes flight easier to control and first touches easier to time. As you grow more comfortable with controls in flight, you can start using more boost to increase your overall aerial speed.

Rocket League Sideswipe introduces some new mechanics to the franchise. As discovered by Twitter user AurawraBeam back in the alpha, there are Purple Shots and Gold Shots. The former allows you to shoot with your car’s belly, while the latter lets you shoot with your butt, making you shoot one way, while flipping the other.

and the gold shot! pic.twitter.com/ZpSrcCUcba

There are various other advanced mechanics, which we’ll go over in a separate article, but start making use of these beginner tips to get a head start in Season 1.

Michael Kloos is a Dutch esports journalist and enthusiast with a particular like of Rocket League and VALORANT. He is also an avid fantasy/sci-fi reader and writer. He spends most of his time trying not to be in the real world.