Provided by The Pokemon Company See how the Pokémon UNITE tournament meta has shifted during the past month.

Throughout March, Pokémon UNITE saw large shake-ups in the meta as the game introduced new staples like Duraludon and Hoopa. Meanwhile, many already introduced Pokémon saw large swings in usage based on nerfs and buffs. With these patches and changes, how has the effected the tournament scene throughout the month?

Below are the pick-rates for each Pokémon in both the February and March finals for the 2022 Pokémon UNITE Championship Series. Data is based on the first instance of each streamed teams appearance through the officially streamed matches.

The following images display team composition overlap for February and March (the data behind the images can be found here). While these do not outline full team compositions, they do highlight common Pokémon pairings on a team. 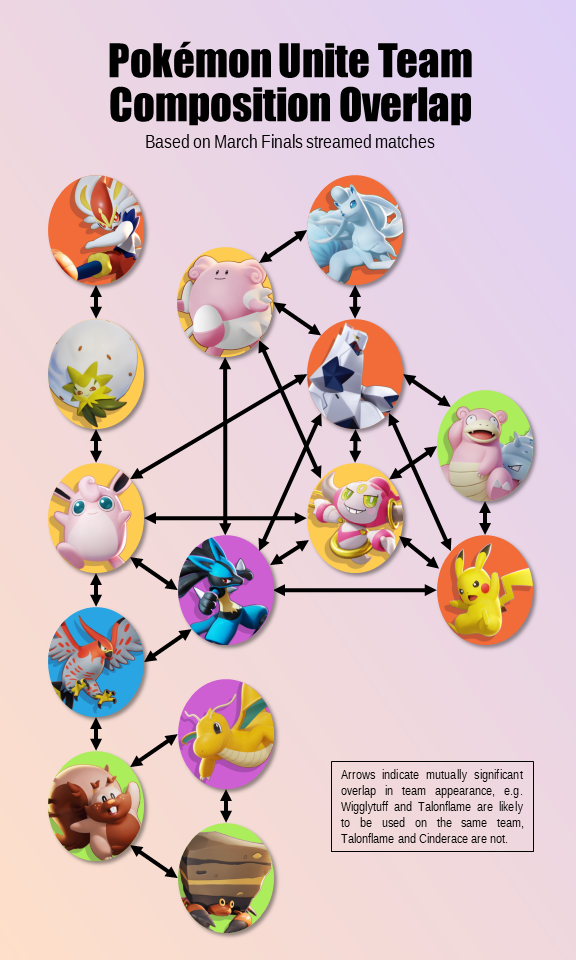 Score-based team compositions, which eschew winning team fights for scoring as many points as possible, was one of the competitive Pokémon UNITE playstyles commonly seen in the February Japanese, South Korean and European tournaments. Mobility and shield generation take a priority over damage output, allowing these teams to dart past enemies and utilize score shields to rack up points.

However, in March, these compositions weren’t as popular, with only some European and Japanese teams playing them. Greedent, perhaps the most representative Pokémon for this play style, saw its pick rate drop from 35% to 14%.

In February the score comp teams often comprised of Dragonite, Greedent, Lucario, Talonflame and Wigglytuff. These five Pokémon all have a strong combination of shield generation and mobility. March saw this composition change a little bit as Crustle also began to see play. Dragonite also lost a large number of players, being reduced to only significant overlap with Crustle and Greedent.

The curious case of Wigglytuff

In February Wigglytuff saw nearly double Slowbro’s pick rate, at 42% to 23%. In March the gap has closed a little bit, with Wigglytuff only ahead 40% to 29% and Blissey actually outdoing Slowbro with 31%.

Despite having an incredibly strong toolset, Wigglytuff is finding itself a little rudderless in the meta — frequently used, but increasingly replaceable.

A tale of two lane duos

Slowbro and Blissey have seen increased attention between February and March. Because of this, the two are finding themselves in direct opposition to each other.

In February, Slowbro and Pikachu were a very common pairing, with Venusaur a distant second as a lane attacker without a clear lane partner. While Slowbro and Pikachu continue to be paired together in March, there is a new pair in opposition to them.

Ninetails received sizable buffs in patch 1.4.1.7, which lead to its pick rate increasing from 0% to 29%. Blissey, who did not receive buffs, also saw its pick rate jump from 4% to 31%. These two formed the opposition pairing to Slowbro/Pikachu in lane.

These pairs are often anchored in a match by the meta staples of Duraludon, Hoopa and Lucario. These three Pokémon make up the backbone of the non-score composition, and Slowbro/Pikachu or Blissey/Ninetails round out the rest of the team.

Now that patch 1.4.1.10 has shifted the meta away from Duraludon and Pikachu it will be interesting to see what future tournament compositions look like.