Magic: The Gathering Theros Beyond Death is shaping up to be a meta changer, as we just discussed in our overview of blue. Today, we’re looking at Magic‘s color of passion and fire — red. In the last Standard, red wasn’t represented much outside of sacrifice decks, so let’s see if Theros Beyond Death is able to change that around!

Purphoros, Bronze-Blooded is embedded with the standard Theros god text, meaning it won’t be a creature unless you fill its devotion requirements — 5 in his case. He’s an indestructible legendary enchantment creature for 4 generic and 1 red mana. With 7 power and 6 toughness, he’s quite big for a red creature. But the size isn’t why you’ll be rocking with the Therosian god of the forge.

Purphoros gives all of your other creatures haste, which is extremely useful in aggressive decks. However, unlike most of the new gods, the real kicker is his second ability. Purphoros can put any red or artifact creature from your hand onto the battlefield for just 2 and a red mana. Because of his first ability, this creature will have haste. In older formats like EDH, this can mean a Blightsteel Colossus swinging at you with no prior warning. It’s also worth noting that this ability doesn’t cast; hence it’s immune from counterspells.

It’s quite likely that Purphoros will be enough to make Big Red an archetype in the post-Theros Beyond Death Standard format. His ceiling is casting an Ilharg, The Raze Boar from your hand, attacking with Ilharg, and cheating another big creature into play.

Underworld Breach, a red Yawgmoth’s Will? 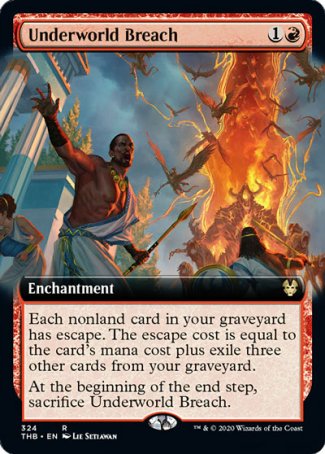 That’s a bit of an exaggeration, but the potential of this Magic card is insane. Underworld Breach is an enchantment for 1 and a red, and it allows you to recast any card in your graveyard by paying its mana cost and exiling three others. It also sacrifices itself on your end step, but if it didn’t it would probably get emergency-banned. In an aggressive deck, you can expect to have 12 or so cards in your graveyard by the time you’re completely out of resources. A resolved Underworld Breach will let you reuse four of those. While it isn’t technically card advantage, the value you can expect from this card is insane.

In a deck leaning more towards midrange or control, it will let you bring back your key cards in case they get removed or countered. But where this card really shines is eternal formats. In EDH, it’s already helping red on its road to competitive viability. It’s part of many different infinite combos (the most easily findable being one with Lion’s Eye Diamond and Wheel of Fortune). It’s also expected to make a splash in Vintage, Legacy, and potentially even Pioneer.

Ox of Agonas enters and escapes 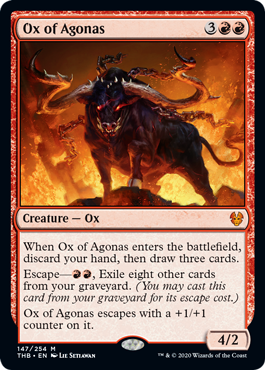 Remember how we said Purphoros can cheat cards into play? Here’s one of the candidates Theros Beyond Death offers. Ox of Agonas is only a 4/2 for 3 and 2 red mana, but when it enters the battlefield, it’ll discard your hand and draw you three fresh ones. In case you’ve got no cards in hand, this means it comes strapped with an Ancestral Recall. It also has an escape cost of 2 red mana and exiling 8 other cards from your graveyard. In case it enters the battlefield this way, it gains a +1/+1 counter.

We anticipate that Ox of Agonas will be seeing major Standard play in pretty much every mono-red deck. In an aggressive deck, it allows you to refill your hand with three new cards (six if you also bring it back with escape). It also presents a fairly sticky threat itself, which will help significantly with the control matchup.

How do you feel about what Theros Beyond Death gave red? Is Underworld Breach as busted as we think? Let us know in the comments. Then check out what we had to say about the white meta.

For more Magic: The Gathering news, follow us at Daily Esports.

TFT Dragonlands: All the new augments coming to TFT set 7