Magic: The Gathering Theros Beyond Death is shaping up to be a meta changer, as we just discussed in our overview of the new white meta. However, blue is widely regarded as the best color in magic, so let’s see how that reputation holds up after Theros Beyond Death with three game-changers.

Thassa’s Oracle is a 1/3 creature that costs 2 blue mana, and at first glance, its card text doesn’t look all that impressive. After all, she just offers a strictly worse scry X, where X is your devotion to blue. The “you win the game” part of the text isn’t especially relevant in Standard. Yet Thassa’s Oracle still provides an excellent blocker against aggressive decks and offers utility with its 2 blue pips and scry-like effect.

Where Thassa’s Oracle really shines though is eternal formats. In competitive Commander (cEDH), it not only offers a cheaper replacement for Laboratory Maniac (“Labman”), but it’s also outright superior to it. A weakness of Labman-reliant decks was always that you could kill the Maniac in response to its trigger. In that case, the player controlling the Labman would lose. Thassa’s Oracle gets around this issue completely.

The Oracle also has a decent chance of getting play in other formats such as Pioneer, Vintage, and Legacy.

Thassa, Deep-Dwelling has the standard Theros god text saying she isn’t a creature unless your devotion to blue is at least 5. She costs 3 generic and 1 blue mana for a 6/5 legendary enchantment creature with indestructible. Her text allows you to either exile another creature you control on your end step and bring it back under your control, or you can pay 3 and a blue to tap a creature.

The first effect allows you to reuse “enter the battlefield” effects, such as Thassa’s Oracle. But it also has the “hidden” effect of bringing creatures that you stole for a turn back permanently. Thassa is most likely to see play in midrange blue devotion lists, as well as rogue “theft” decks.

Magic has recently been printing more and more collector’s items such as the newest Secret Lair. So keep an eye out for the “constellation” edition of Thassa!

Callaphe, Beloved of the Sea 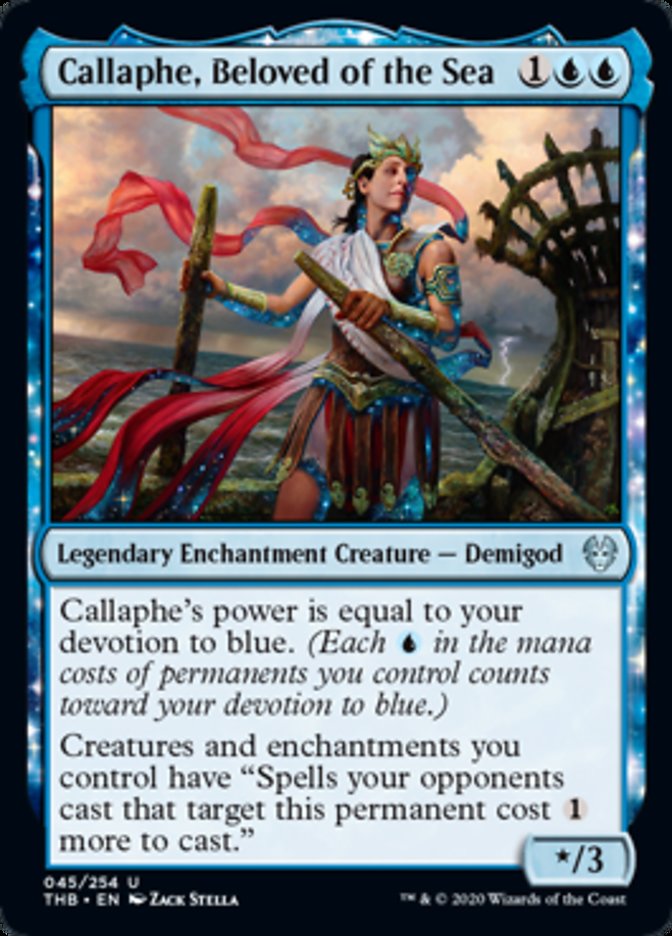 While there was a lot of contention for the number 3 most influential blue card in Theros, we eventually opted for Callaphe. She is a legendary enchantment creature and Thassa’s demigod. She costs 1 and 2 blue mana, and her power is equal to your devotion to blue, making her quite aggressively statted. For example, with a 1-drop like Siren Stormtamer and a 2-drop like Thassa’s Oracle, Callaphe’s power would be 5. This isn’t even the best part of this card, as her effect makes your opponents pay 1 generic more for every spell that targets a creature or enchantment you control. This makes us think Callaphe will be a crucial part of any mono-blue tempo deck that may develop after Theros Beyond Death.

Do you like what WoTC gave blue in this set? Maybe they went overboard? Let us know in the comments. Then check out what we had to say about the white meta.

For more Magic: The Gathering news, follow us at Daily Esports.