LoL Guides | The best Jhin build, runes and counters for 2022

Provided by Riot Games Jhin is a powerful Marksman champion that can solo carry games.

The 2022 League of Legends season is finally here and, with it, a bunch of new changes to the game. Jhin is one of the premier marksman options in the bot lane in the current metagame. According to stats and data website U.GG, Jhin has the highest pick rate among bot lane champions with a whopping 22.9% across all regions and ranks. As the most popular ADC champion, players can see the raw power Jhin can bring to a team composition. Those looking to climb can follow this quick Jhin build guide, which is used by the current Rank 1 Challenger player, DK21. 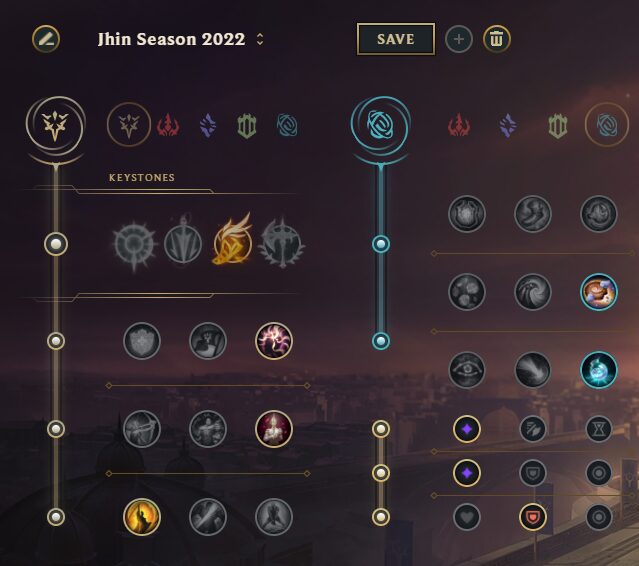 Jhin wants to use Precision as his main tree and Inspiration secondary with these individual choices:

As for ability leveling, Jhin players will want to start with their Q ability “Dancing Grenade.” From there, they will look to max the Q ability at Level 9 and his W ability “Deadly Florish” at Level 14, while putting points in his Ultimate at every possible level.

For the ideal item build, players will want to follow these guidelines:

According to U.GG, here are the top five champions that counter Jhin in the bot lane. These counters are based on win rate.

As for champions Jhin counters, here are his best matchups based on win rate:

These are the champions that pair well with Jhin in lane according to the duo data on U.GG based on winrate: