How to play Battle for Olympus in Overwatch 2

Provided by Activision-Blizzard. Heroes fighting it out on Ilios.

The power of the gods is in your hands, mortal⚡

Battle for Olympus is live in #Overwatch2 NOW – go head to head in this limited time free-for-all deathmatch for a chance at eternal glory!

Getting in-game is easy for the Battle for Olympus

This FFA consists of seven heroes:

Each of them has their own skin in-game, whether you own the skin or not. Speaking of which, even if you haven’t unlocked Ramattra yet, he is available in this game mode to all players.

Lastly, there isn’t a lock to how many of each hero can be chosen. You can have a lobby full of Widowmakers, or a mixed bunch as is common.

The hero rundown in Battle for Olympus

Let’s go over each hero and what they do differently in Battle for Olympus. 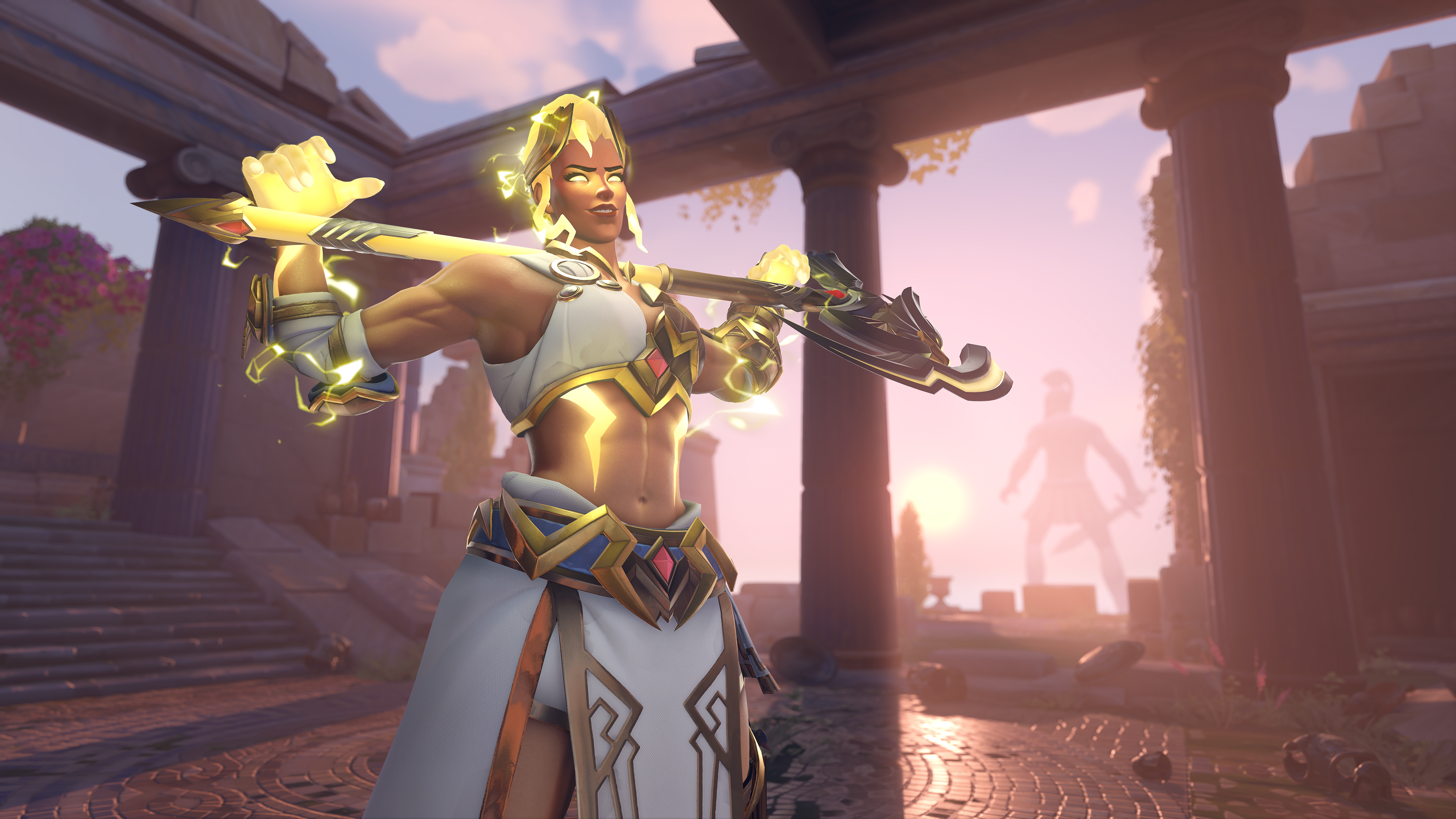 To start, we have the Zeus Junker Queen, with the only Mythic skin out of the seven heroes available. Her kit is essentially the same as normal, but with some key differences. The most recent patch has changed Junker Queen, so those changes are on display with this game mode.

But, as is standard for this game mode, her ultimate does something extra when used. On top of the Rampage, she also gets a set time where any damage she does strikes a lightning bolt on that target, dealing extra damage. This allows her to hit multiple enemies with her ult and finish them off quick, on top of staying strong for some time afterwards.

As for Poseidon Ramattra, his kit is the same as his original version. However, much like his regular version, Ramattra’s ultimate is what truly makes him fear inducing in the Battle for Olympus.

On top of his ultimate Annihilation, the Divine version of it makes his Ravenous Vortex ability even stronger, allowing it to pull enemies to the middle of it before launching them up in the air a little. Plus, his Pummel does more damage and had a farther reach.

Minotaur Reinhardt, while the same typical Reinhardt normally, turns into a charge demon when his ultimate goes up. On top of the regular Earthshatter, for a period afterwards, his Charge gets multiple buffs. First off, it can hit multiple enemies at once, heals upon a kill, one-shots enemies who get pinned and extends the buff time on kill. Also, his Charge cooldown is lowered to three seconds long. 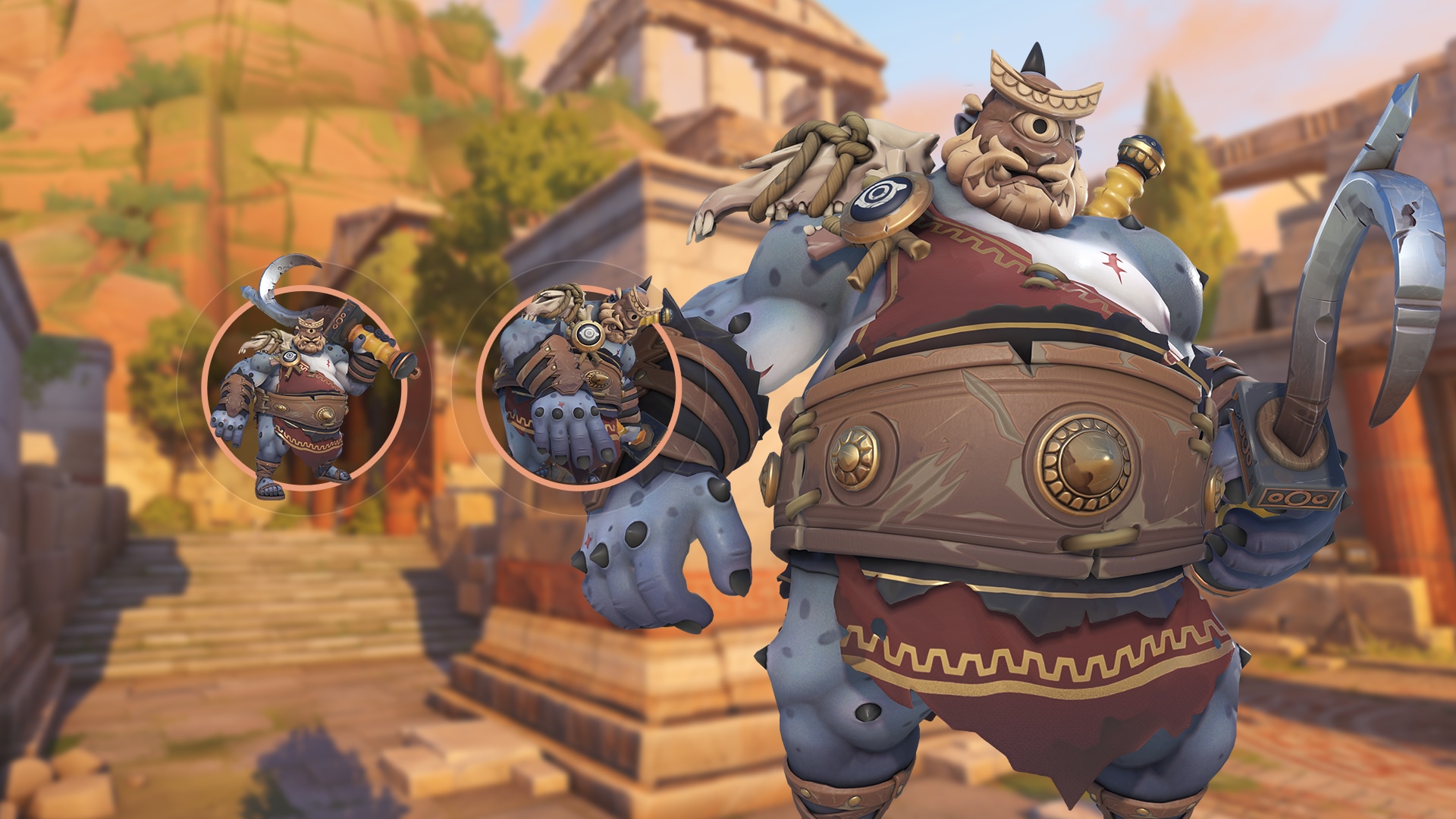 For Cyclops Roadhog, his ultimate gets more of a rehaul than just a regular buff. First off, his Whole Hog fires boulders that hit hard intermittently instead of his regular low-damage scrap fire. Plus, it makes Roadhog bigger, increasing his health by 600. In addition, it improves his melee by letting it boop enemies and deal five times its regular damage.

This Divine Whole Hog lasts 15 seconds, like most Divine ultimates.

For Hades Pharah, her ultimate gets buffed so that it no longer keeps you in one spot. You can move while using it, albeit not as much as Pharah regularly can. For 20 seconds after using Rocket Barrage, her Rocket Launcher fires three rockets at once, her jet fuel is reduced by a lot and kills heal and extends her Divine ultimate.

As for Widowmaker, her ultimate is very fitting to her Medusa skin. Now, when you scope in and look at enemies during her Infra-Sight, they turn to stone for a period of time, leading to easy headshots and kills on enemies.

Last but not least, Hermes Lucio provides some very useful buffs to Lucio’s kit with the Divine Sound Barrier. Lasting 20 seconds long, on top of the extra health, he gets an extra jump post-wall ride, his Boop can deal extra damage and stun enemies if they hit a wall, and lastly, he attacks and moves faster with infinite ammo.

In terms of gameplay, asides from getting used to the new ultimate each hero has, it’s just a traditional free-for-all. Quick respawns, enemies abound, trying to get to 15 kills before anyone else does.

There are a couple of unique additions, including packs to charge your ultimate faster scattered around the maps. Plus, on the Greek map Ilios, the winner will get a statue of their hero in the middle of the map before the game ends.