All new Little Legends and Arenas in TFT Reckoning: Dawn of Heroes

RPG and High Noon themes are on display for the mid-set update.

Image provided by Riot Games High Order Pengu has won the day and as a reward, he is going to be one of the new little legends in the mid-set update.

With every big Teamfight Tactics update comes more opportunities for players to customize their cosmetics. With the Dawn of Heroes expansion, players will be able to add five new little legends to their collection as well as five new arenas. Here are the new TFT Reckoning Little Legends for the new update, the new arenas, and how to get them.

The theme this time around for the new little legend egg expansion is RPG/Adventure. Little Legends from previous sets have gone on a quest and have equipped some dungeon crawling gear. Fuwa takes on the role of a druid, Molediver is playing the classic paladin role and Umbra is well uh…dragon. Each Little legend comes with their base neutral version as well as a good and evil version too. 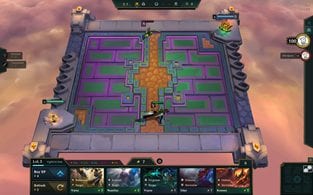 The arena features what appears to be a dining hall. In the press event for the update, the development team mentioned that the food will be flying around throughout the game and the econ markers are indeed food as well.

But that’s not all. Just like with the Pool Party Choncc and the Pool Party Arena, a fan-favorite theme from League of Legends is making its way into TFT. This time around its the gunslinging wild west them, High Noon. A new High Noon Squink will headline the little legend portion of the theme and a new High Noon arena will also be available for purchase.

Exact details on prices have not yet been announced for the new TFT Reckoning Little Legends and arenas. Stay tuned for more details.

The Modern Warfare 2 Chopper Gunner was bugged in the beta

Everything to know about VCA 2022

Everything to know about VCA 2022