The players Call of Duty left behind

GRVTY, and other Call of Duty players, are still struggling to find a way to the CDL

llustration by Jonathan Talas Call of Duty's switch from a five-on-five to four-on-four format left a large swath of the Season 1 starters without a team.

Thomas “GRVTY” Malin was pumped. His Call of Duty Challengers team, WestR, had torn through other top amateur teams heading into the postseason in late February. It felt like no one could take them on, including some actual Call of Duty League squads.

“I think we can beat them,” GRVTY, whose team won four Challengers Cup events leading into the season, said in February. “I believe that our team is a top-six team in the pro league.”

GRVTY had reason to be confident. He and his team were scrimmaging against Call of Duty League rosters every week and winning. Legends like Seth “Scump” Abner of OpTic Chicago agreed with him, and his squad was outplaying everyone else in Challengers.

Then, WestR lost to the New York Subliners Academy team in the playoffs and finished second overall. That loss, along with an even worse finish at one of the next season’s Challengers Cup events, led the team to part ways with Alex “Zaptius” Bonilla for former Paris Legion gunner Timothy “Phantomz” Landis. From there, the organization, like many in the amateur scene, crumbled.

GRVTY’s teammates were picked up by pro teams. Paul “PaulEhx” Avila was signed by the London Royal Ravens, and Carlos “Venom” Hernandez joined the Los Angeles Thieves. Zaptius was also picked up by London a month later. GRVTY, 22, was the only member of WestR not signed by a pro league team and made his way onto a new tongue-in-cheek Challengers org: EastR.

Roster turmoil is nothing new to GRVTY. He was a substitute for the Atlanta FaZe for the Call of Duty League 2020 season, living out of apartments in Atlanta while playing on the pro squad’s Academy team over the course of a pandemic-riddled season. He parted ways with Atlanta in the offseason after Activision and Treyarch announced that, after two years of five-person teams, Call of Duty: Black Ops Cold War would return to the four-on-four competitive format.

“After last year ended, it was just mutual for me and FaZe. They were gonna let me do my own thing,” GRVTY said. “I didn’t have a team, but after we parted ways I was even hungrier.”

Barely 24 hours after the Dallas Empire won the Call of Duty League 2020 Championship, Activision made the announcement. In Season 2, the CDL would return to a four-person format after switching to five-person teams in 2018.

“We absorbed that moment best we could,” Dallas Empire general manager Marcus Lovejoy said. “Then we found out about the switch, so it was short lived.”

The switch back to 4v4 was widely viewed as a positive move in the Call of Duty community. It changed the chaotic pacing of 10-person games to a more strategic approach with fewer players on the field.

“We were trying to do something similar to Golden State Warriors where we had five starters that could play to our strength,” Dallas Empire head coach Raymond “Rambo” Lussier said. But that championship-winning roster was one player too large for the 2021 season. He and Lovejoy had to make a crucial cut and adjust their vision.

“There was no scenario where our team didn’t get shit, regardless of who was on the team and who wasn’t by the end of it all,” Rambo said. “It was basically a team decision that was made.”

Just a few days after the Aug. 30 end to the 2020 season, there were 50 previously signed Call of Duty League players available as free agents.

While the change to 4v4 was welcomed for strategic reasons, it also put dozens of players out of a job. Tommey sat on the bench for most of his tenure on the Empire but appreciates a slower-paced game with a smaller roster, even if the new Call of Duty title was part of the reason he lost his job.

“The change was great news,” he said. “I wasn’t a fan of the switch, so when the announcement was made it was a nice surprise.”

Tommey doesn’t see a path back to starting in the league. It’s not because the grind is too much, however. It’s due to the fact that he’s found a more exciting career path as a competitive Call of Duty: Warzone player. The battle royale title had more than 1.5 million viewers during a live event that revealed a new map; this means big business for content creators like Tommey.

“With how well Blackout did, I knew Warzone would only be bigger,” he said. “It was a hard decision but after competing for roughly 10 years, I wanted something new and felt like it was about time I gave it my all in streaming too.”

The grind is real

Playing through the Call of Duty League amateur scene, Challengers, isn’t easy. Some top teams, like the Built By Gamers squad, give their players salaries. The majority of amateur players live with their parents and earn little more than a small amount of prize money if they place well at events. The Challengers Cups, for example, dish out between $2,500 and $1,500 to the top two teams. Most teams don’t have contracts with their players, making it easy to leave and join a new team regularly.

“This is the first time it’s been 4v4 with franchising,” Call of Duty Challengers caster Alan “IHOLDSHIFT” Donofrio said. “There is no more open bracket. All of these players, former pros as recently as last year, can’t get past Challengers. It’s been a different dynamic. Some of the frustrations with the climb have become more vocalized.”

The open bracket gave players the ability to play through qualifiers in order to land a spot on stage against pro teams like OpTic and Envy. Call of Duty publisher Activision created a separate amateur scene to replace it, but many players, including those like GRVTY, favored the old non-franchised system. There are only 12 teams in the Call of Duty League, which means there are a limited amount of open spots every season.

Contracts come at a price

It’s also difficult to keep a top amateur team like WestR together in the Call of Duty scene. Most players don’t have contracts tying them to a specific squad for a season. Many would also jump at the chance to join a Call of Duty League team when given the opportunity, leaving the rest of their squad down a man. Teams have picked up a handful of rookies this season alone — including the Los Angeles Thieves, Minnesota RØKKR, London Royal Ravens and the Toronto Ultra.

“That’s just the nature of the game,” Minnesota RØKKR head coach Brian Baroska said. His team scrimmaged against GRVTY and WestR. “You’ll see a player on the Tier 2 roster that’s a cut above the rest. Someone will take a chance on that younger talent and take him from that team.”

The players that do find themselves on a squad, with contracts that offer decent salaries, often find an extra roadblock in their path to the Call of Duty League. CDL teams often avoid buying players out, opting to sign players without obligations instead.

“You can’t just get out of a contract and join a team straight away,” Toronto Ultra head coach Mark Bryceland said. “Some players are worth a buyout, but that’s why you see teams taking players from Challengers that didn’t have contracts.” 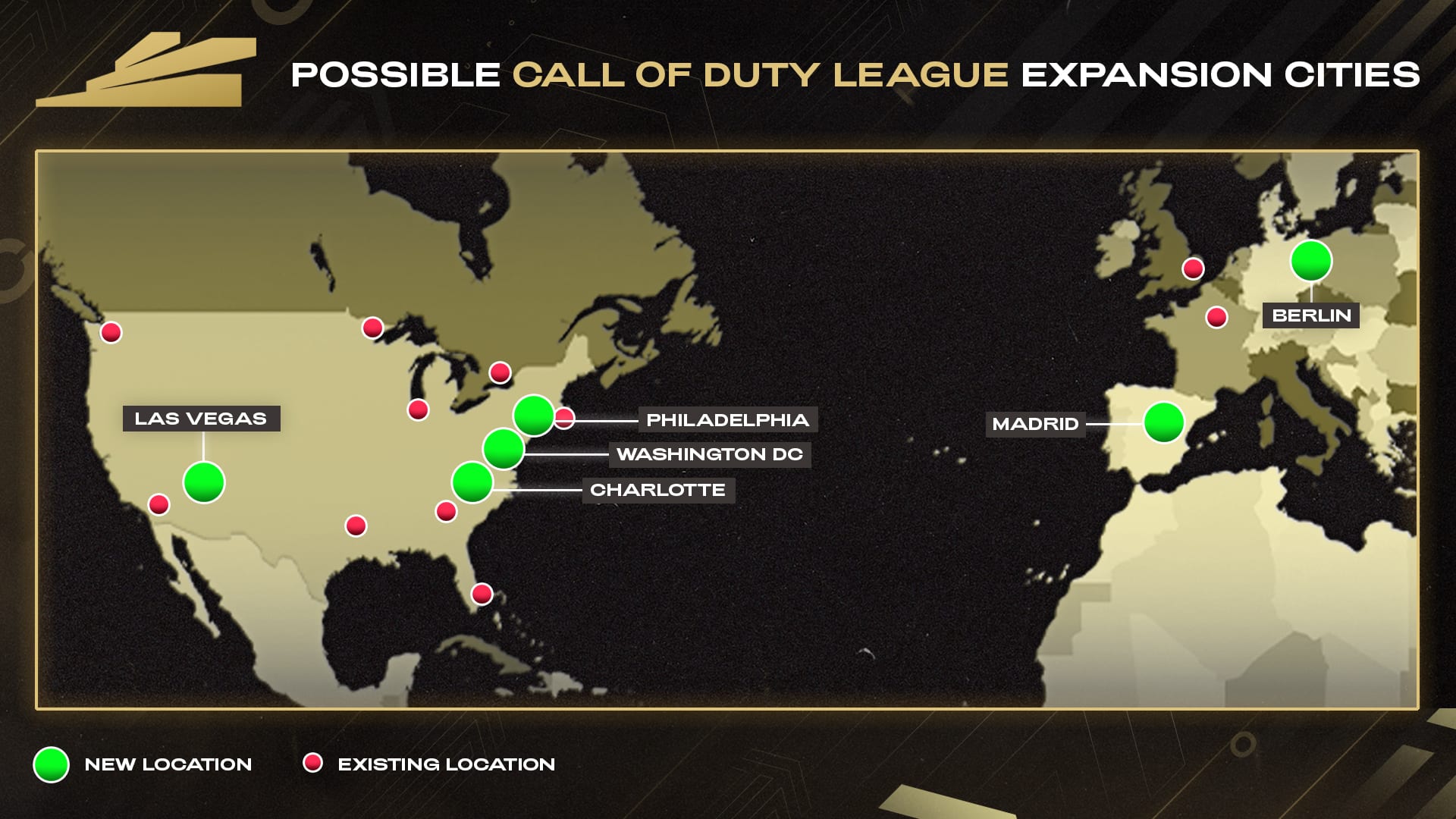 GRVTY was originally hoping to ride out the season with WestR and join the league with his squad on one of the expansion teams that are rumored to come next season. Reports have indicated that Activision has looked at expanding the league similarly to how the Overwatch League added new teams in going from 12 teams to 20. The Call of Duty League was originally meant to start with 20 squads, but Activision wanted teams to become self-sustainable before expanding. Players, coaches and managers think that change is inevitable.

Grinding to a spot on an expansion team

“You would think that the teams that are playing best in Challengers, they’d get the first offer,” GRVTY said. “You’d think they’d have first dibs.”

The idea of keeping a team together seems near impossible in the Call of Duty amateur scene with organizations making roster moves constantly. The ability to get picked up has become more about individual performance than team synergy. That’s unless an expansion team comes in and likes what they see in an amateur squad.

GRVTY is still on the road to get back to the CDL, although it feels like more of a grind each and every day. Activision brought some hope back to the scene by confirming the return of LANs, leading players to believe the CDL could be back on track to growth. GRVTY is holding out hope that he’ll be on a new team in a new city — like Washington D.C., Las Vegas or Philadelphia — next season.