Hours after the Overwatch League announced the first details about its 2020 season, league staff shared further information about plans for the new schedule with players and team staff members during a phone call. Teams then had a chance to voice their concerns about the proposed changes, and other subjects such as the impending role lock and balance updates, to league staff.

Upcomer obtained a recording of this call as well as a pair of images explaining the season structure from a source who asked to remain anonymous for the sake of their career. The specifics are detailed below. 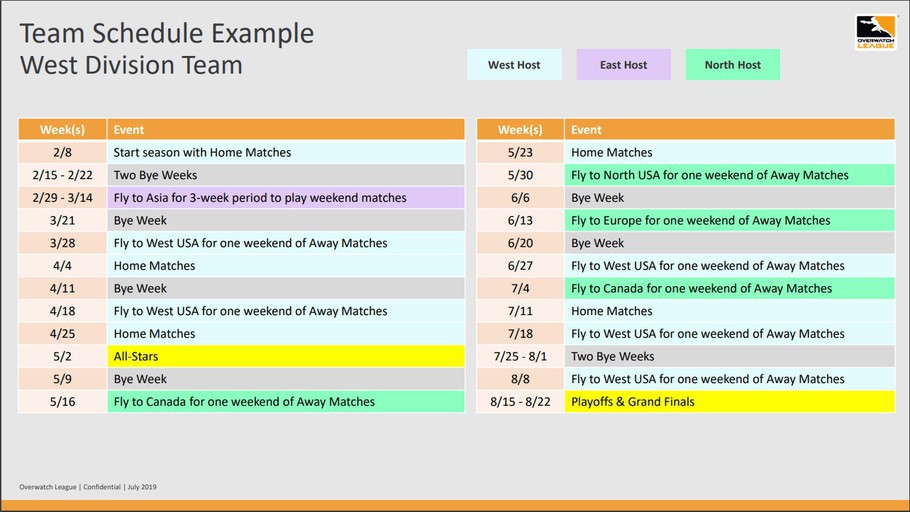 Overwatch League officials said the schedule will be finalized in mid to late August. The season finals will still take place at the end of August, much like this year.

The league plans to have a 26 week regular season with an additional two weeks for the playoffs and grand finals. This includes one week for an All-Star week or some other mid-season event, but leaves no room for additional breaks during the season.

Since teams will play two matches during most weekends, the schedule would leave teams somewhere between 8-10 weeks without active play which they may use for travel or to recuperate. Officials also said there should also be another play-in tournament for the playoffs, pending minor adjustments based on the success of this year’s play-ins. 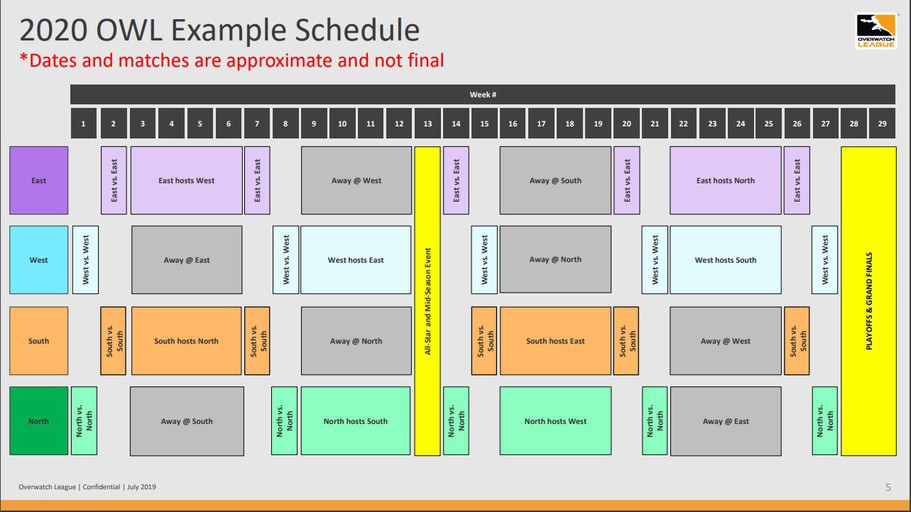 As for the structure of the season, the league gave an example schedule where teams would alternate between games within their own divisions and games against teams outside either their division or their conference. In this example, each division would have a chance to host teams from the other half of their conference and one division from outside their conference.

During the call, players voiced concerns about the additional strain that the All-Stars event put on certain players. One team member also raised the issue of proper compensation for participating in the event. Overwatch League officials acknowledged the issues with the format and were receptive to feedback.

They then offered a possible alternative under consideration to add more meaningful competition to the All-Stars event. This included different team based matches, including the top 8 teams of the first half of the season competing in a mid-season tournament, similar to the current stage playoffs. Others brought up less serious tournaments against teams, similar to how League of Legends handles Rift Rivals.

It is also important to note that the league has not yet decided on a location for the All-stars event, but stated it will be hosted at a team’s venue.

Teams raised concerns with visa complications for next year. The League assured the teams that according to the immigration council, the planned schedule would be manageable in terms of getting players and staff the required visas for each respective country. Mid-season pickups are expected to take around a month after signing to receive the required visas.

The league will assist teams with guidelines on applying for the respective visas. Officials added that the league won’t force team staff and players to change their residence to their home city. Instead, that decision will be left up to each individual team.

During the call, teams also made it clear they had not been given many details about the 2-2-2 role lock for Stage 4 of the 2019 Overwatch League Season. Teams asked when they could expect a new balance patch to practice with, and league officials said teams will play on the current PTR patch for Stage 4 without further changes based around the role lock. No one mentioned specifically when heroes such as Brigitte or Roadhog would get changes to compensate for the role lock, but they are in the works according to officials.

Teams raised a related concern about the schedule of balance patches in the Overwatch League. Since the new schedule lacks stages, there are no longer natural breaks for the league to implement new patches.

Blizzard officials mentioned they aim to push live server patches to Overwatch League as soon as possible, meaning that after two or more weeks of additional testing after a patch goes live, the Overwatch League would receive it too. The league expects balance changes in an interval of roughly 6-8 weeks.

The league also couldn’t give a specific date for when the post-season free agency window will open, but mentioned a time frame of early October. Teams can then discuss extensions and options until November 11th, after which players not under contract move to free agency.

Blizzard could not be reached for comment. The story will be updated to reflect new information once Upcomer receives it.