FunnyAstro: “For this season I think it would be really cool to have a 28-0 map score"

One of the top North American Contenders prospects shares his perspective on playing in the league.

Daniel "FunnyAstro" Hathaway is currently one of the best prospects outside of the Overwatch League. With impressive mechanics and two years of competitive experience under his belt, the young talent has quickly become a household name within the Overwatch community.

Within these last few years, FunnyAstro has played for the London Spitfire’s academy team, British Hurricane, and is currently on the Atlanta Reign’s academy team, ATL Academy. While FunnyAstro spoke with Upcomer about his thoughts on the upcoming Overwatch Contenders season and how important having LAN experience is, he also revealed that he should be in North America in the coming weeks.

This will have a huge impact on how well Astro can play during the regular season. At the moment, he plays from home in the United Kingdom, which comes with its own set of pros and cons. As it turns out, though, there are many more hurtles than benefits.

“I think the only real positive is that I still get to live with my family,” FunnyAstro said. “There are so many negatives though. The worst is that I have to play on constant high ping⁠—anywhere from 120-170ms. And I can’t shot-call too loud because I will wake up my family and neighbors because scrims are at 4 a.m. Personally, I struggle with sleeping when it’s light as well, so most days I’m super tired and I can’t stream as much as I want to.”

The on stage experience

Increased rest and performance would have certainly been a boon for the young main support when he traveled to Krefeld, Germany with ATL Academy for the inaugural Atlantic Showdown. Despite how playing at home takes its toll, FunnyAstro said it was much easier to stay focused at his second LAN. Compared to the nerves he used to feel, like when his team won Overwatch Contenders Europe 2018: Season 1, the showdown was nothing.

“I used to get nervous when I played in front of a crowd, but I managed to stay calm the whole time,” FunnyAstro said. “It’s good to have at least one person on a team with experience who can stay calm and try to keep their team focused.”

He also said it was important to make the most of the down time in between maps. Whereas players are often left to their own devices at home, there’s only one thing to do when playing in person.

“In online matches, people can browse Twitter or do whatever they want in the breaks,” FunnyAstro said. “But when you’re all sat together, the only thought in your head is how you should play differently for the next maps.”

Despite LANs like the Atlantic Showdown giving players valuable on stage experience, FunnyAstro said it’s hard to say whether that will help players transition to the Overwatch League without going through the experience himself.

“I don’t think anyone in Contenders is prepared for any part of Overwatch League,” he said. “But as long as you do good enough in Contenders to go to one live event, you should be fine and know what to expect on stage.”

Based on ATL Academy’s performance in North American Contenders, he may have an opportunity to find out what it’s like to play in the Blizzard Arena. His team placed second in their division during the most recent Contenders season and finished respectably in 4th place at the Atlantic Showdown. Astro said that was only possible thanks to their group chemistry.

“I feel like where our team shines the most is our mentality,” he said. “Everyone on our team is friends, and I think that’s super important, especially in GOATS meta. We have fun when we play together and enjoy [practicing], so there is always lots of energy.”

When asked who on the team deserves more credit for their success, he pointed to 16-year-old Zarya player, Garrett "Saucy" Roland.

“If I have to pick out one player who shines the most though, it would have to be Saucy,” FunnyAstro said. “It’s a shame he isn’t 18, so can’t play in Overwatch League or this year’s Overwatch World Cup.” 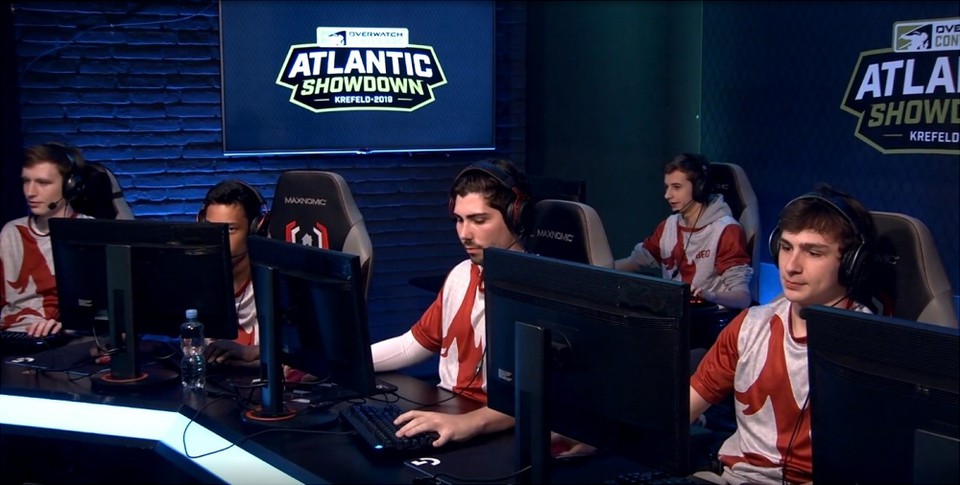 Many Overwatch pundits consider FunnyAstro to be one of the most talented players outside of the Overwatch League at the moment. With all the pressure many pros face when playing under that kind of microscope, it’s plausible he must face the feeling on a regular basis. In truth, his experience couldn’t be farther from that assumption.

“I don’t really feel much pressure,” FunnyAstro said. “I know I’m one of the top main supports in Contenders North American right now, and I’m really confident in my ability to perform in matches.”

Having such a well-rounded attitude toward being in the public spotlight while still understanding his value helps Astro set clear, ambitious goals for himself and his team. For now, he wants ATL Academy to try their best at reproducing the San Francisco Shock’s golden OWL stage in Contenders.

“For this season I think it would be really cool to have a 28-0 map score in groups,” Astro said. “It will be tough, but I think we can do it if we work hard enough. I’m not really scared of playing against anyone in our group. The best teams other than us are probably Gladiators Legion and Meta Skyfoxes, and we beat them both last season. I just really want to make Gauntlet so we can go to Korea.”