The Summer Showdown qualifiers in the Overwatch League are over, with both the East and West divisions going to the play-ins. The two teams from each region be decided on Sunday. The Western division looks powerful and the Eastern division looks scary, with both Dallas and Shanghai looking to win again. Some new teams are looking to win it all, while others are trying to get that first playoff win for this season. 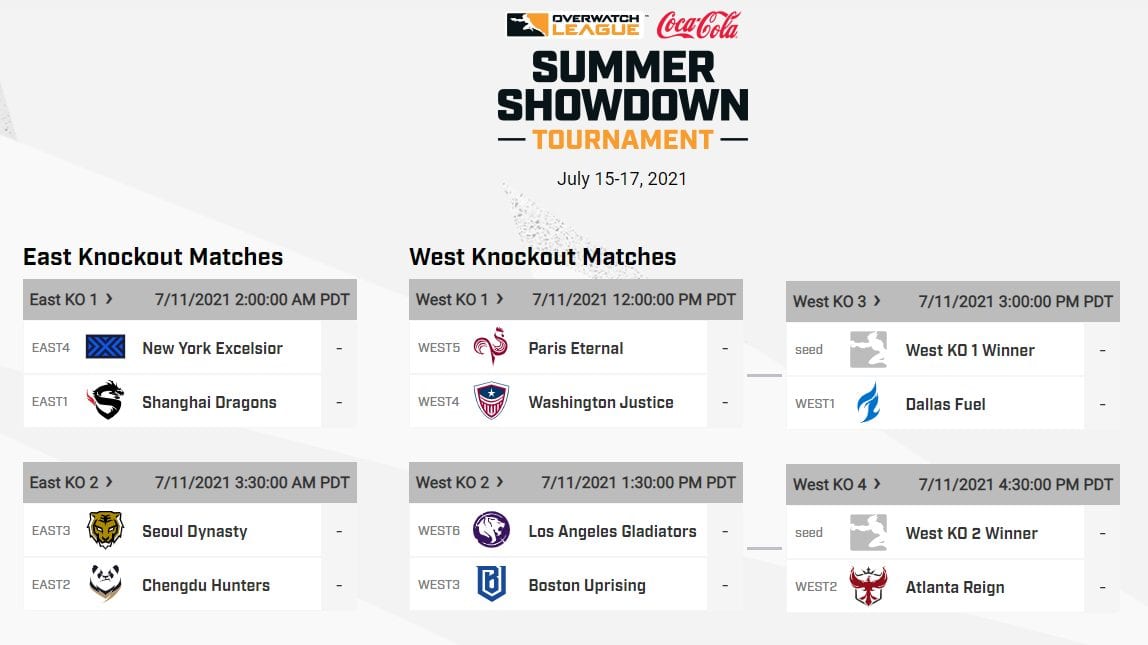 The West starts to whittle down

The job's not done yet!

Here are the six Western teams that will be competing tomorrow for their spot in the @CocaCola Summer Showdown. pic.twitter.com/oOVyZxVHMf

The six teams battling for the two spots from the West consist of a new team to the knockouts, as well as some notable missing squads. Starting with the more common ones, the Atlanta Reign and Dallas Fuel are back, trying to win a tournament. With both these teams having recent success in the June Joust, their return is not surprising. Especially the Fuel, looking to make their third tournament finals in a row. The more interesting teams joining the fray are the Boston Uprising, Washington Justice, Los Angeles Gladiators and Paris Eternal.

Starting with the Boston Uprising, their season has been at a steady climb since the start of the June Joust. They were eliminated from that tournament by the Atlanta Reign, swept out early on. This time around, their admirable usage of the classic Tracer/Genji dive composition has gotten them the third seed. Boston will face off against the Los Angeles Gladiators, who are also looking to make a mark after improving all year. After a great June Joust where they went 4-0, they got eliminated by the Dallas Fuel and couldn’t book their ticket to Hawaii.

The last two are teams who struggled in the past tournament, but shined under the new conditions of the Summer Showdown. The Washington Justice looks back to their May Melee form, needing to win in the knockouts this time around. However, the Paris Eternal is making a case to be a contender in the West in the Summer Showdown, as they did in the 2020 season. Off of their new additions from European contenders, they seem to be developing the synergy needed to upset the best.

The East look to win the tournament again

It was a close race, but the final four in the East are set.

Tomorrow, two of these teams will qualify for the @CocaCola Summer Showdown, and two will get sent packing. #OWL2021 pic.twitter.com/zCJJKqodR7

The four teams battling for the two other spots in the East consist of some returning challengers. The Shanghai Dragons and New York Excelsior are back from the June Joust to try to make it to Hawaii again. Shanghai is running an interesting Wrecking Ball and Sombra-focused composition that nobody in the East can defeat, finishing 4-0. New York looks to try to recapture their magic from making the June Joust’s Hawaii games. Off the back of their recent signing Shin “Kalios” Woo-yeol, their new tank synergy could lead them to an upset.

Then, the Chengdu Hunters look to return to the Hawaii games since their quick elimination in the May Melee. Despite the Dragons status as a tough opponent, the Hunters have been fighting alongside the Dynasty to defeat them. Speaking of the Seoul Dynasty, these Summer Showdown play-ins are a great opportunity to finally make their mark. After their great run at the end of the 2020 season, the Dynasty is always capable of a big upset. We’ll have to see if the team works well in their play-in match against Chengdu.

Dhokla is not hiding frustration after CLG's disappointing superweek

Dhokla is not hiding frustration after CLG's disappointing superweek