While the official release date for Call of Duty: Modern Warfare 2 remains Oct. 28, there’s now a way for players to get access to the Campaign mode one week early.

Announced Tuesday, the Campaign for MW2 will release as an early access mode starting on Oct. 20. This means players can hop into the Campaign and play it before the full game releases one week later. In addition to the Campaign’s early access announcement, Activision also revealed a new gameplay trailer for the mode.

Digitally pre-order #ModernWarfare2 and play the #MWII campaign up to a week early beginning October 20th!

In order to gain access to the early access Campaign, fans must digitally pre-order Modern Warfare 2 on their preferred system. It doesn’t matter which system players decide to play MW2 on; as long as they go to their system’s online store and pre-order the game from there, they will receive the early access. It also doesn’t matter which version of Modern Warfare 2 fans pre-order; they can choose any edition of the game and still receive access to the Campaign beginning on Oct. 20.

This is the first time that Activision has ever released the Campaign mode prior to the full launch of a Call of Duty. This was likely done to give fans who don’t normally play the Campaign a chance to experience it without distractions from multiplayer, zombies, Spec-Ops, etc. It’ll also allow fans to see what guns could be featured in multiplayer, the different potential Operators and more possible gameplay elements.

Of course, some of that content will also be revealed through Call of Duty Next and the subsequent multiplayer beta next month. Call of Duty Next is an event happening on Sept. 15 that will showcase much of what Modern Warfare 2 has to offer, including multiplayer, Warzone 2 and Warzone Mobile, and more. The multiplayer beta will follow right after that on Sept. 16 for PlayStation pre-orders. Fans can see the full roadmap up until launch below. 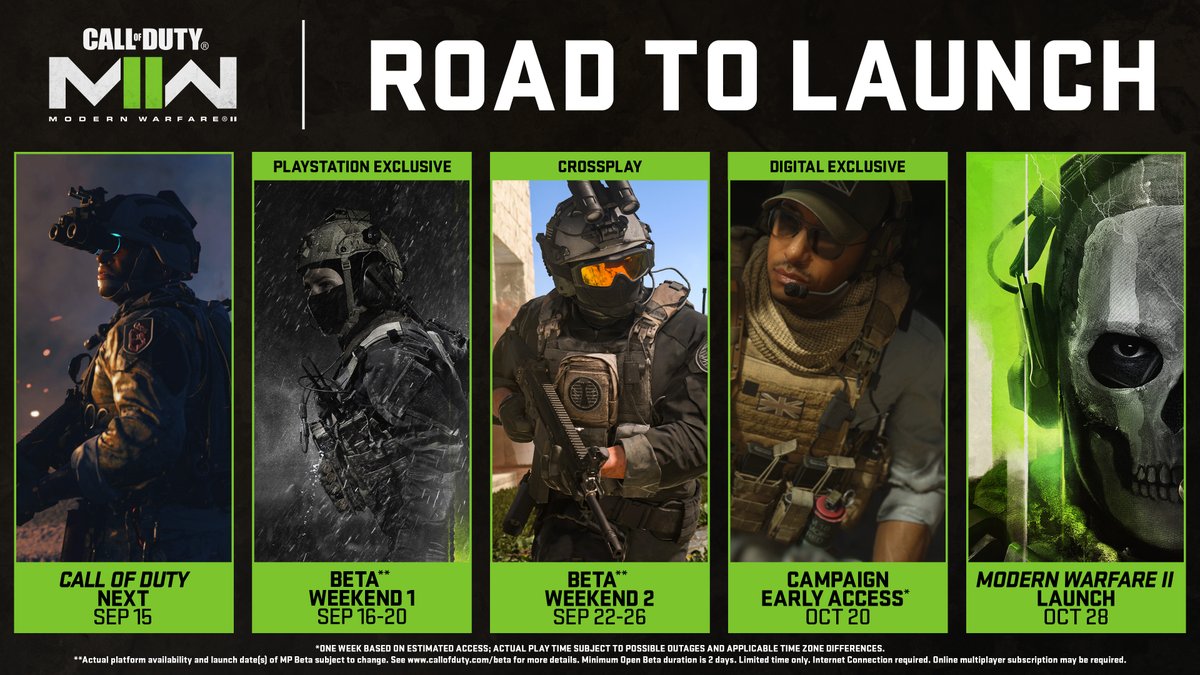 The next two months will be chock-full of Call of Duty content, and fans won’t have to wait much longer to get their hands on Modern Warfare 2.