The three-weekend pre-season tournament will give spectators a sneak-peak at how the LCS teams stack up ahead of the 2022 LCS season.

Provided by Riot Games For the second straight year, the LCS will have a pre-season tournament.

Before the start of the League Championship Series 2022 season, the 10 LCS teams will compete in a pre-season tournament as a warm-up before the real competition commences. The LCS 2022 Lock In tournament will give teams and fans a chance to see how all the North American teams rank ahead of the regular-season start. The tournament kicks off on January 14 and ends on January 30.

The 10 LCS teams are split into two groups of five and will play a single round-robin against the other four teams in their own group. All matches are the best-of-one in the group stage and the top four teams in each group will advance to the knockout stage.

In the knockout stage, the eight teams that advanced from the group stage will be seeded based on their performance in the group stage. The knockout stage will be a single-elimination eight-team tournament. The quarterfinals will consist of best-of-three matches. The winners will advance to the semi-finals where they will play a best of five to determine the two teams in the finals which will have the two finalists play another best of five to determine the winner of the LCS 2022 lock-in tournament. 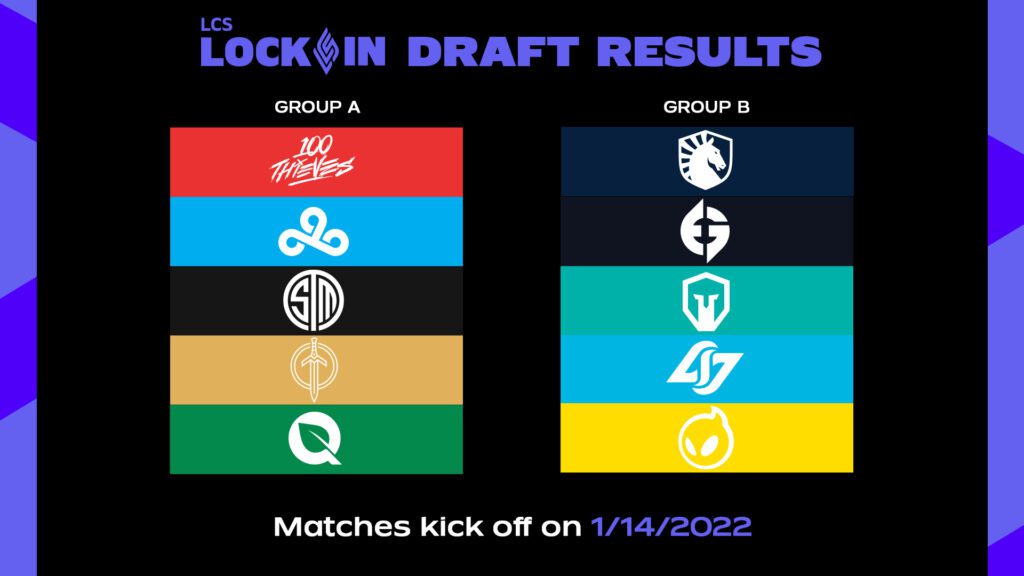 To decide the groups, the 10 teams participated in a unique draft. Teams took turns picking another team to place into the other group. For example, 100 Thieves chose Evil Geniuses to be placed into Group B. Evil Geniuses then chose TSM to be in Group A and so forth. Here are the official groups for the LCS 2022 Lock In tournament.

In Group A is 100 Thieves, Cloud9, FlyQuest, Golden Guardians and TSM.

The event will broadcast over the course of three weekends starting on the weekend of January 14. The first weekend will have games on Friday, Saturday and Sunday. Each day will showcase a total of five games. The start times each day are different. Games start at 5:30 pm EST on January 14. But on January 15 games start at 4:30 pm EST. The group stage will conclude with Day 4 which will be on the following Friday on January 21.

The lock-in tournament will conclude on Sunday, January 30 at 3:30 pm EST with the finals. Spectators can catch all the action live on the LCS channel on Twitch.

The best sniper rifle to use in Call of Duty: Warzone Season 4 Reloaded