A previously unknown term is being tossed around

Provided by CDL Methodz is one of the players currently at the mercy of the Game Launch Extension.

Free agency is beginning to reach a boiling point in the Call of Duty League. After the deadline to extend team options on 1+1 contracts passed on Aug. 14, players began tweeting out that they were free agents. These free agents are then able to sign new contracts with a team starting on Aug. 22, so that’s when rostermania will truly begin.

As of right now, players and teams are trying to figure out their best course of action for the 2023 season and beyond depending on what free agents/potential buyout players are on the market. However, there are also players that have been subject to a Game Launch Extension, which has introduced a new element to the offseason.

The term “Game Launch Extension” began to gain traction when certain CDL players had their 2023 status announced. As of right now, there are four players that have officially received the Game Launch Extension tag for the 2023 season. Those players include Cameron “Cammy” McKilligan, Thomas “Scrappy” Ernst, Charlie “Hicksy” Hicks (Toronto Ultra), and Anthony “Methodz” Zinni (Boston Breach). There could be other players that received this specific extension, but they are currently unknown.

If you’re wondering what a Game Launch Extension is, then you’re not alone. Fans have been confused about what that means for a player/team since rostermania began. Essentially, if a player has been Game Launch Extended, the organization can keep them under contract until two weeks after the next Call of Duty game releases.

So in this year’s case, players who are Game Launch Extended can be kept under contract by their current team two weeks after Modern Warfare 2 releases on Oct. 28. The full description for the Game Launch Extension in the CDL is viewable below. 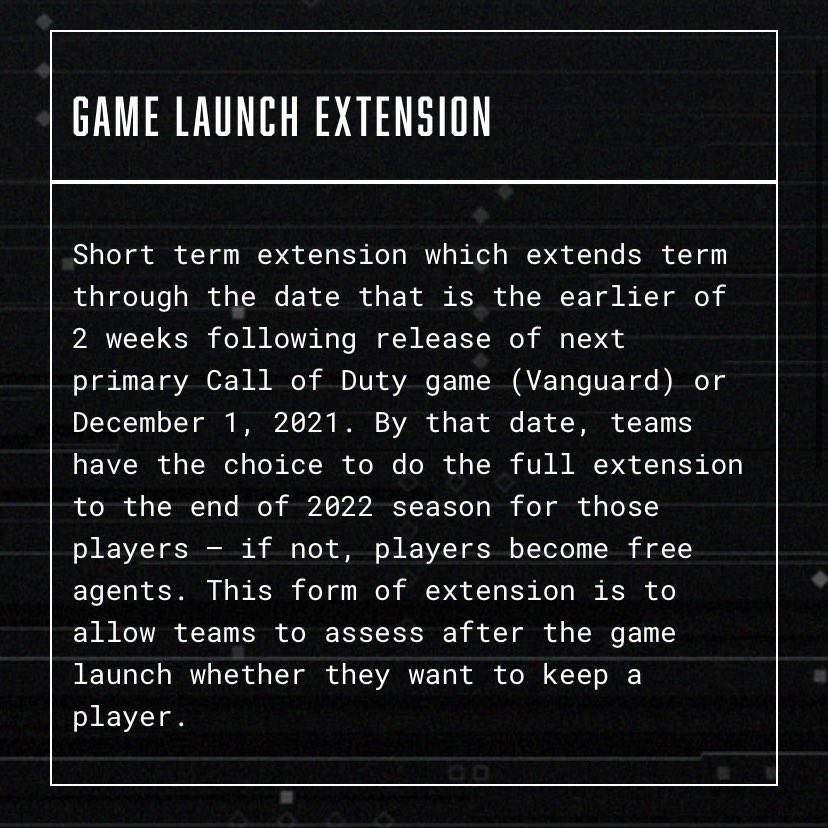 While this might make sense on paper, it seems far more advantageous to the organization rather than the player. Essentially what this does is allow teams to keep a player from becoming a free agent when rostermania begins in August. Teams can then wait and see how free agency plays out and then decide what to do with the player they Game Launch Extended.

For example, the Boston Breach, who extended Methodz using this tactic, can try and find a replacement for him during this year’s free agency. If they do, then they would likely release Methodz. However, if they can’t, then they would extend Methodz for another year. While this works out for the organization, the player is then left in a situation where they’re unable to control their own future. If a team decides to release a player after two weeks have passed since a game’s release date, then that player might find it very difficult to get signed to another team since free agency has basically passed.

Minnesota ROKKR COO Brett Diamond said his team has never used the Game Launch Extension. However, Diamond said the intention behind it was to see how well a player performed in a certain game before deciding on their future. Of course, teams can take advantage of this in the ways we just detailed.

We’ve never used it, but yes that was the original intention

It’s unclear what teams this year plan to do with the Game Launch Extensions. However, Methodz and the three Toronto Ultra players might find themselves in a pickle later on if things don’t work out in their favor after Modern Warfare 2 has launched.