Fleta and ryujehong chase redemption: “The goal is to make playoffs”

Dynasty's support and DPS lament about the state of the game's meta heading into Stage 3.

Seoul Dynasty are not happy.

After losing to the Hangzhou Spark in Week 5, veteran Overwatch League team Seoul Dynasty lost their chance of making it to the Stage 2 playoffs. They weren’t sure where to pinpoint what led them to the 3-1 defeat. Maybe some issues with teamwork. Maybe nerves. The wrong mentality.

It’s not like they’re doing too bad this season, either. With a 3-4 record, Seoul Dynasty is now sitting in 10th place. They’re even ahead of the Philadelphia Fusion, who shocked OWL fans in Season One by making it to the grand finals.

But the team is quite hard on themselves.

Right now, their goal is to make it to the Stage 3 playoffs. It’s their shot at redemption. To prove to their fans that they’re a great team. Unfortunately, the all-Korean roster is a bit weary after the results of Stage 2, and after Upcomer spoke with DPS Byung-sun “Fleta” Kim and support Jehong “ryujehong” Ryu, it appears the team’s confidence may be shaken. 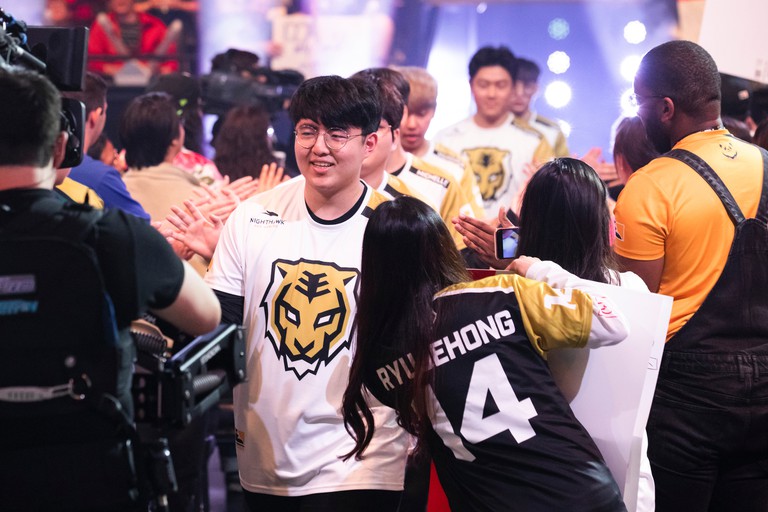 Headshot after headshot with Widowmaker and wiping out entire teams with Genji’s ult are just normal moments for Fleta, who is often referred to as a DPS god. But, as most GOATS go, he spent most of Stage 2 playing Zarya.

“I used her the most because of the current meta. But I personally don’t really like to use Zarya. I am not enjoying it as much,” Fleta told Upcomer.

But when the current meta calls for three support heroes and three tanks, skilled pros like Fleta have to adapt if they want to keep up with the competition. In fact, Fleta has spent 350 minutes playing Zarya this season, followed by 90 minutes on Brigitte. And while he has proven pretty useful with these tank heroes, it hasn’t really been Fleta’s cup of tea.

In Stage 3, Fleta is hoping he can play more Pharah or Genji. Actually, “any DPS heroes,” he told us. “I would love them to be used in Stage 3.”

But Fleta and his team are being realistic about what Stage 3 has in store: More GOATS. With no enthusiasm, Fleta stated that Stage 3 will have a very similar meta to Stage 2, where GOATS kept them back from the playoffs.

He envisions himself playing DPS heroes very sparingly in specific situations and specific maps. This realization is frustrating for Fleta, who once hyped up crowds and casters by taking out entire teams with Widowmaker headshots.

And GOATS isn’t only holding Fleta back.

Support specialist ryujehong is also pretty positive that Stage 3 will just be more GOATS. Once known as the “world’s best Ana,” this ever-present, stubborn meta has basically forced ryujehong to become a Zenyatta main.

“I would like Stage 3 to allow me to use different support heroes, so I don’t have to be the same hero throughout the stage,” he admitted.

Despite continuous praise over his unnatural, god-like Ana abilities, ryujehong told Upcomer that he “couldn’t find any” when I asked him what his strengths were as a player. For ryujehong and the rest of the Seoul Dynasty, the mediocre Stage 2 results, along with their recent less to the Spark, have left them ashamed of saying anything positive about themselves or their team.

Not performing up to standard has definitely rattled Seoul Dynasty. But deep down, the team knows they’re made up of highly talented players who have all but mastered their roles. While it’s unfortunate that GOATS has messed with their mojo, even Seoul Dynasty know it’s too early to give up on Season 2.

“The goal that I have in Stage 3 is to make it to the playoffs,” ryujehong said.

For the two pros, it was difficult to say anything positive after their disappointment over missing the playoffs. They both told us that if they had better Stage 2 results that they’d feel more comfortable discussing their team’s strengths.

But after a pause, they managed to say that Seoul Dynasty does have a few things going for them. Not that we had any doubts. Being an all-Korean roster, they’ve noticed their in-game communication is excellent. It also helps that the team is very close with each other personally, not just professionally.

Bonding in Los Angeles together has only served to strengthen the roster. They’ve taken trips to Disneyland and Universal Studios, and just explored the city. And ryujehong went on a boat for the first time in his life when the squad went whale watching.

“It was really interesting and fun,” he said.

While Fleta misses his family and a few convenience stores nearby his home in South Korea, he’s enjoyed going out to eat with his team in LA. One of their favorite spots so far is the Wolfgang Steakhouse in Beverly Hills.

Seoul Dynasty are hoping to come back as a stronger team in Stage 3. And they’ll do their best to do just that, said Fleta. They have the communication. They have the skills. Now, it’s time to show GOATS what they’re capable of.