Khan on being part of SKT's rebirth: "I'm really happy that I was the chosen one"

Khan stands in a crowd of extreme talent in the top lane at MSI.

The top lane has been a popular point of conversation for the teams at the 2019 Mid-Season Invitational so far, but typically that conversation revolves around ﻿Invictus Gaming﻿’s Kang "﻿TheShy﻿" Seung-lok and how terrifyingly good he is. ﻿SK Telecom T1﻿’s top laner Kim "﻿Khan﻿" Dong-ha, however, starts a different conversation.

Known as an international choker following his 2017 Worlds and 2018 MSI performances, Khan has actually performed quite well this time around, even in the team’s losses to iG and G2.

Khan and SKT will need to prepare something special to win a best-of-five series against their stronger opponents, or else a finals trip will not be in their future.

The best-of-fives are coming up soon. iG Looks very strong, and G2 have a 2-0 over you, do you feel like you’ll be able to prepare well enough to make it to the finals knowing you’ll likely face one of those in the semis?

Khan: Our team has a lot of players with a lot of experience in the best-of-fives so I do think it’ll be a lot better compared to the best-of-ones for us to show our ability. The environment will be better. And our goal is always to reach the finals, so yes. 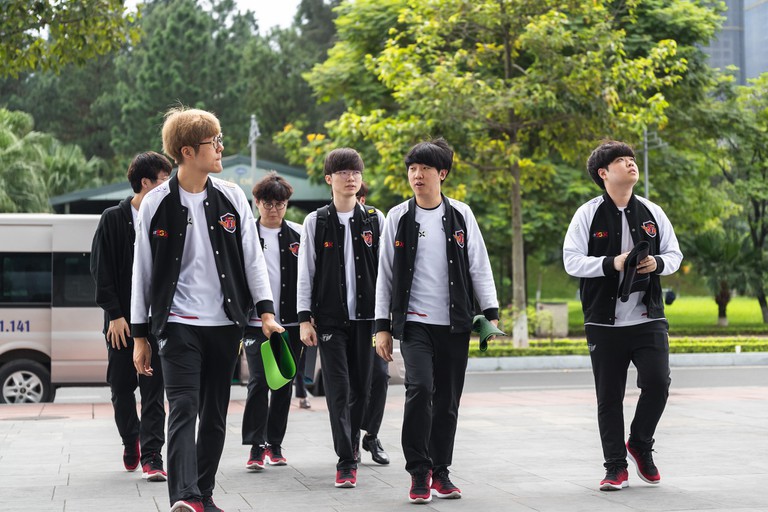 Kang "TheShy" Seung-lok in an interview today said Martin "Wunder" Hansen was the second best top laner behind himself. I know you and him are friends, so what do you have to say to him about his ranking?

I think currently that ranking actually makes sense, but it could change by the end of the tournament, so I’m going to keep my answer till then and maybe tell what I think according to the results.

Were you looking forward to your rematch against TheShy?

We have a lot more games coming up [in the knockouts] and one best-of-one wouldn’t really change a lot of results. But yeah, for the rematch with TheShy, in the first match I wasn’t able to do anything in top lane because the game was exploded in the early phase, so I just wanted things to be a bit different this time.

Three roles have very exemplary players at this tournament, including several world champs. Which role do you think is the most stacked?

I think top lane, because looking at all the players, from first all the way to sixth, I think they’re all evenly good. So maybe top lane is the best, most fierce competition.

Yeah, well speaking of [Phạm "Zeros" Minh Lộc], he solo killed both TheShy and Wunder. So even though he is in the sixth ranked team, he is better in terms of the lane. And FYI, I didn’t get solo killed by Zeros, and I also killed him.

It seemed like Faker was very particular about the SKT roster this year. Do you feel honored to be chosen for the team in their rebirth?

I’m not really sure who made the final decision, whether it was the head coach or Faker, but I am really happy that I was the chosen one.