As the sole team sitting undefeated so far this MSI, the most recent world champions, Invictus Gaming, smashed the famous LCK representative, SK Telecom T1, in the fastest international game in history. Invictus have also outpaced every other region here so far, and now sit in first place by a wide margin. The closest team to them, G2 Esports, are still two wins behind. Out of six total games, that’s a long gap.

Invictus support Wang "Baolan" Liu-Yi met with Upcomer to break down Invictus’ strategies at MSI so far, rate the other teams, and shit-talk NA.

Your win against SKT was the fastest game in international event history, how did you do that?

Baolan: I think it was a flaw of the Sona, Taric combination bot lane. If they fail the early game, they typically collapse very, very hard. So this time around, even though we didn’t expect the game to go that fast ourselves, once we were in the game and got our early leads, it was an expected result. 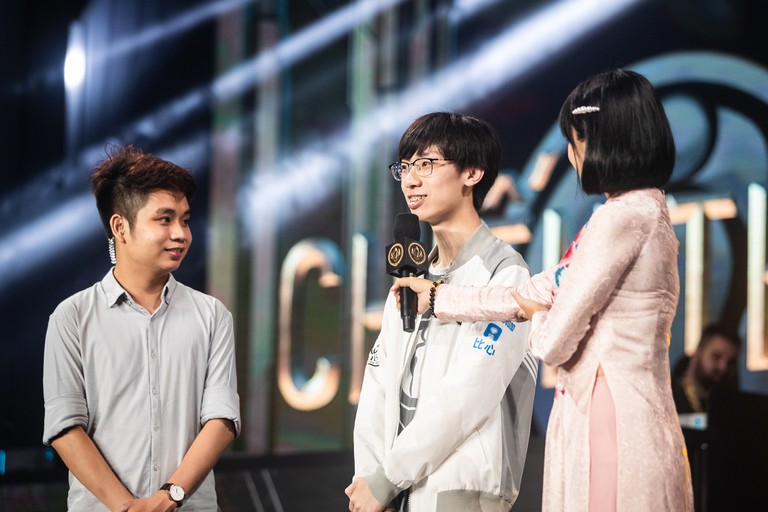 You got Yu "JackeyLove" Wen-Bo’s signature Draven pick in that game, too. Do you think you can pick that into more than just the Sona, Taric?

If the situation calls for it, we’ll definitely pick the Draven. I think the Draven is very strong champion in our pool. It’s one of our strengths compared to other teams. I don’t know how other teams forget about this champion, or maybe they don’t have the setup to play it. But Jackeylove is a very good Draven.

People talk about the incredible names in the support pool here, but most often it’s referring to Jo "CoreJJ" Yong-in and Cho "Mata" Se-hyeong. With you also being a World Champion support, Where do you feel like you fit in the group?

Ah, it’s so hard! I guess I would just say it depends on the results of this MSI. But... Ah, I really don’t know how to decide.

PVB seem like they were the closest to beating you the first time around, but who do you think has the best chance of taking a game off of you during this phase?

We always thought it would be G2. The last time we matched up against them, their draft was a bit suspect. We thought they had a “4fun draft.” Hahaha. But we have great respect for their level of play, so I’d still say G2.

Who then is the hardest bot duo you and Jackeylove have had to face just in terms of laning? I would’ve expected SKT to be that answer, but after that game I imagine it’s different.

I would have to say G2 and SKT’s botlane because Perkz can play a lot of mages and non-meta champions in that role, and it’s kind of difficult to deal with. I think Perkz is also top in his position at regular ADCs as well. For SKT, I just feel like they didn’t play the standard AD + Support, so I can’t make a definitive statement yet.

Any words for Doublelift and CoreJJ?

How long do you think it’ll be before someone can beat your record at the fastest game internationally?

Not sure, but if it ever happens, I think it will also involve Draven.