Xmithie on rowdy TL fans at MSI: "Jensen laughed so hard in draft because of those guys"

The best jungler in North America talks fans in Vietnam and being the underdog.

Despite doubts, despite memes, despite facing the hometown team, Jake “﻿Xmithie﻿” Puchero and ﻿Team Liquid﻿ advanced to the main Group Stage for MSI 2019.

After a shaky first game, they cleaned up more each game and completed the series lossless. Though they did prove to be a level above the emerging regions, Xmithie told Upcomer after the win that Liquid have more to fix if they intend to take down the Korean and Chinese superstars on ﻿SK Telecom T1﻿ and ﻿Invictus Gaming﻿.

The road to Taipei will be tough, but Xmithie exhibited confidence in himself and his team to transfer their scrims to the stage and secure their ticket to the final event.

There were a lot of doubters of Liquid against PVB, but how worried were you as a team before coming into these games?

Xmithie: Well, we were just going to bootcamp and we weren’t really focused on who we were playing against. For play-ins, we didn’t really worry about it much, but we also didn’t get overconfident or anything. I think we just wanted to focus on ourselves rather than how we should play against them, or play against their pace. And that was kind of the problem in the first two games, we faltered a lot because of that. 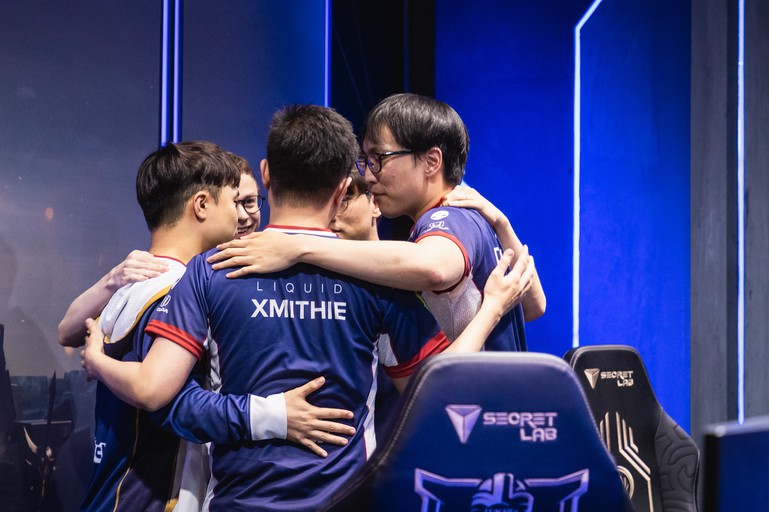 Was the struggling mostly based on you not knowing how they’d play?

It’s not really about what champions they were playing, but about what their strategy was. They played around their jungle pretty well, and they collapsed pretty well. So their playstyle is just different than pretty much any team we played against so we were caught off guard. And they’re really good at getting picks in the jungle, so we got picked a lot. And a few throws, but it worked out.

So what do you have to say to the journalists and analysts out there that also doubted you? There are a lot who legitimately thought you wouldn’t make it to the main event, and that if you did, you’d just get dumpstered there.

I think there’s a little bit of merit to that. They’re kind of correct in that, but they’re wrong at the same time. Even in the Spring Finals, we didn’t play that well in the early game to mid game. And that still showed here since they were really aggressive most of the time. But once mid game happens, it usually goes better because we are playing as a team pretty well.

So you think they really have merit for saying Team Liquid won’t make it to groups?

I mean yeah I could see it, haha. Compared to the other teams, people might think we’re the underdogs, which I think we are. But I mean, when I was on CLG, we were also the underdogs and we made it to the Finals, so.

I have you seeded above G2 if they end up subbing their support. How do you feel about your placement in the group?

Well since we were in bootcamp, we played a lot of international teams. And we played pretty well, but it’s just up to us to get the results on the actual stage. But I do think we have a shot at winning the whole thing.

While you were on CLG, that was the best NA has done internationally, but you’re currently on the strongest roster NA has ever sent. So you just said you think you can win, but anything further than that?

I think on paper our team looks really, really strong. You know, all of the accomplishments on our team are really great. But it’s just up to our team cohesion and how we transfer our practice into the stage. I always say the biggest setback for any NA team is usually you do really well in practice and then it’s just really hard to actually transfer it to the stage. So I think that’s what we’re focused on.

And what do you think about that matchup against G2?

Well we always have a friendly rivalry, I even went out with [Marcin "﻿Jankos﻿" Jankowski] for a night when he was in NA. And we had fun just trash talking each other, just saying, “My team will beat your team!” But we’re both just dog junglers so it’s just up to our team for who wins, haha.

Ah, well do you have anything to say to him then since you’ve got that friendly rivalry?

May the better dog win!

What would it take for you to go home content with your result?

Another finals appearance would be the best, especially for me because the feeling before was pretty great. So even though we lost, I learned a lot. So hopefully, if we win this, or get to finals, we will just learn a lot and then transfer it locally for the Summer Split.

Did you manage to hear the fans that were out there? Do you have anything to say to them?

Yeah, I think it was actually really hilarious. Everyone else [other than those TL fans] was really quiet. Then even after the game, they were the ones yelling. Then during the draft phase, ﻿Jensen﻿ was laughing so hard in his seat because those guys were hilarious. They just kept screaming “Let’s go Liquid!” Every ten seconds. We’re all used to hearing TSM chants every game, so that was the first time just only hearing them for Team Liquid, so that was pretty cool.