It’s been less than a day since the Dota 2 The International 9 Battle Pass was released, and the pass is selling like hotcakes. Per Dota tradition, 25% of Battle Pass sales go directly into the prize pool of The International, and data from Valve’s official prize money tracker indicates that buyers have already thrown over $5.6 million into this year’s pot.

Valve’s tracking tool also includes a handy graph tracing the growth of each year’s The International payouts over time.

Due to the large influx of purchases immediately following each release, profits generally experience a significant drop-off after the first day. However, it’s clear that sales of this year’s pass—the purple line in the graph—have outpaced those of any other year. This year’s prize pool is already well on its way to exceeding last year’s record-setting prize pool of $25 million. 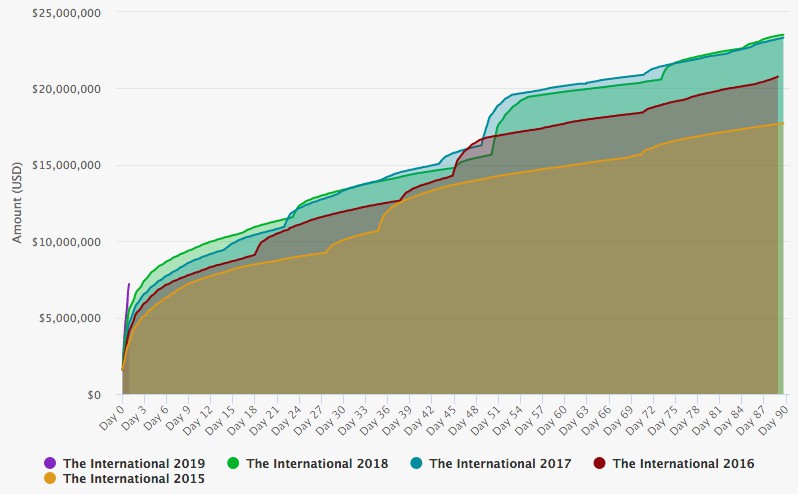 The stellar sales of the TI9 Battle Pass might provide some relief to the doomsayers who have predicted the imminent death of the Dota scene. Dota’s competitive player pool may be shrinking, but there are still droves of casual fans and spectators interested in supporting and watching the game. Admittedly, some fans’ primary motivation in purchasing the pass was simply to push this year’s The International prize pool above the $30 million record set by the Fortnite World Cup—but there’s no indication that this camp is anything but a vocal minority.

If you haven’t yet purchased this year’s Battle Pass, it’s still available on the Dota website.