Gadget: "We watched VODs from Group B teams and were like, 'Woah, they're bad!'"

Gadget lays down the smack talk and guarantees a Group B win for his team.

Ilya "Gadget" Makavchuk lived up to his name and locked in Heimerdinger to take down DFM at the 2019 Mid-Season Invitational, securing the 2-0 in Group B’s first day at MSI.

After picking a triple flex champ in game one and stealing his opponent’s signature champ in game two, all eyes were on the VEG bot laner for the rest of the Group B games.

Gadget speaks to Upcomer about his predictions for the Group placements, his crazy bot lane picks, and thoughts on a developing meta.

You ended first place in your group. Do you feel like you're playing above expectations or did you expect this coming in?

Gadget: I mean I don’t know how others expected us to play, but we definitely played to our expectations. We knew that we would dominate the group from the beginning. Before coming here, we watched every single final from the teams in our group. We just watched them like, “Whoa! They’re bad!” So we came here confident and prepared, and that’s why we won today and that’s why we will win again in three days. 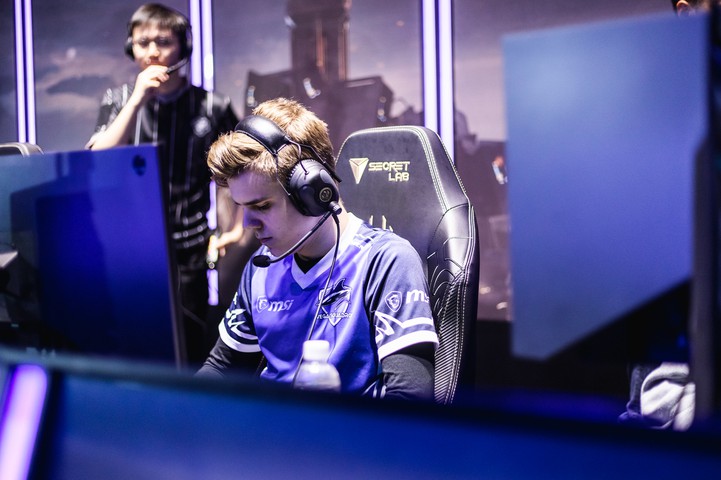 Most fans hyped up Group A as the play-in “Group of Death.” Do you wish they paid more attention to Group B?

I can understand why Group A is more focused on by viewers. Definitely Group A is the death group and our group is kind of, “meh, whatever.” But I think our team can definitely made a show in this group by our picks.

Yeah speaking of those picks, you’re known not to play adcs often and you haven’t yet this tournament. So what’s your take on the bot lane meta?

I think people are really underestimating AP champions and Neeko, and other non-standard picks. because these are really powerful in the right hands.  Like Karthus is just really strong. If you master Karthus adc, it becomes a really strong flex for your team. So same with Neeko, you can flex between top and adc. So most likely I’m going to pick a champion that can flex to another lane. That’s why I’m picking some weird champs that play in other roles more.

Well we saw Chae "Piglet" Gwang-jin pick Irelia in NA and you haven’t been picking those types of champions. Why is it you are just sticking to mage types?

I mean, I think he is just inting with that pick. It’s so bad! It can work only in NA.

Oh okay, talking bad about our region I see. Well you picked Heimerdinger but never played it this season, is that something you just picked to steal from Kyohei "Ceros" Yoshida?

We actually started playing Heimer to prepare for the LCL Finals but just were never able to pull him out. And this tournament we were happy that we were drawn in the group with DFM since Ceros is kind of an OTP Heimerdinger. So that was our plot from the beginning, like “Oh it’s the OTP Heimer, it’s time to pull the ‘Dinger out!”

So in these international tournaments, there is always a specific meta that develops. Are you trying to get ahead of it and force a meta, or are you just picking what’s best for each individual game?

I honestly don’t think that we are strong enough to set a meta for the tournament. We are still in Play-Ins right now, so maybe if we get to the real event, maybe then people will think about our picks and consider them meta or something. But for now, we will pick what we are confident on and comfortable on. And that’s just weird champs, I’m going to tell you. But I hope it’s going to work.

When picking these, is it just theorycrafting and hoping it’s gonna work?

Yeah pretty much, like in scrims I’ll just say “I think Vel’Koz is really good here.” So I pick Vel’Koz without asking anyone, then it didn’t work. “Well Gadget, you aren’t picking Vel’Koz anymore or else I’m dodging the game.” Once I picked Veigar AD and it worked, but it didn’t work on stage though. We stopped that one.

How do you plan to utilize your days off and how will that change the way your group functions compared to Group A who had to play back to back?

Well first plan is obviously to find good scrim opponents because the last few days we scrimmed against bottom teams in Group A that are already out, so they’re probably not going to want to play League of Legends anymore. But probably scrimming against the Group A winner isn’t a really good idea either because we are probably going to play against them in a Bo5 if we both lose to FW and TL. So it’s actually hard to find scrim opponents right now.

But we are going to spend a lot of time practicing and looking at what’s good for us. We’ll probably add some more fun picks for the next few games.

Two of the teams I talked to yesterday mentioned that they lost focus throughout the long day, and it affected their play. Do you feel like that might plague your team at all or are you confident despite the long day?

Honestly, I think this whole schedule is going to buff our team really hard. In the LCL, our whole regular split is just 5 weeks. We have 4 weeks playing 3 days a week, and every time we play 2 games. And sometimes we wait a few games before playing the next one. So we are used to it, we’re used to this schedule. So I think we are ready for it where other teams are not.

Well we will see! Any thoughts on final placements then and where you will end up?

I think we will end up first, losing one or maybe two games and maybe playing a tiebreaker then. I think second team is going to be DFM because now they kind of know our meta and they’ll beat the other teams and could potentially beat us. I think Mega and INTZ can’t show anything to us and DFM. So it’s going to be a battle against us and them.

Anyone you’d be particularly excited to play against if you make it?

I kind of want to play against Lu "Betty" Yu-Hung, the adc for Flash Wolves. Last time Gambit was here and Stanislav "Lodik" Kornelyuk said that Betty is really strong and absolutely smashed him and outclassed him, so I really want to see how Betty plays.