Eight years later, I am still scarred by BL/infestor.

After eight years of watching esports, I’ve come to the conclusion that StarCraft 2’s Broodlord-Infestor meta was the worst meta in esports history.

When I first watched BL/infestor, I was taking my first steps into watching esports competition. As such, my impression at the time was that the meta was terrible. After watching eight years of esports across a multitude of games spanning all genres, that opinion didn’t change. I have come to understand just how exceptionally bad the BL/infestor meta was.

What made BL/infestor so terrible?

The BL/infestor period started around April of 2012. Ilyes “Stephano” Satouri, iconic SC2 player, was the founding father of the composition. His composition first hit international recognition at IPL3 in late 2011. He won the tournament in spectacular fashion, but his innovations took months to catch on with the pro community. The first to adopt his style of play were the foreigners. Once Antiga Shipyard was introduced into GSL, the Korean Zergs adopted the composition as well.

There is no single event or point in time where we can identify the beginning of the BL/infestor era. What we do know, though, is that by June 2011, the ideas of Stephano proliferated throughout the scene, and the BL/infestor era came into full force, and it was incredibly overpowered.

The first and most obvious reason it was OP was the ease of execution. In previous incarnations of the SC2 meta, there was a certain level of mechanical skill required from each of the three different races. For a Terran player to beat a Zerg, they had to master the fundamentals of stutter-stepping, splitting, and tank positioning. For a Zerg player to beat a Terran, they had to have good mutalisk multitasking, good flanks, and punish bad positioning. For a Protoss player to succeed, they needed good forcefields, blink stalkers, and a strong understanding of tech switches. In order to succeed in SC2, there was a skill threshold that players had to overcome.

When the infestor came into play, it changed everything. The infestor was an easy unit to use with strong spellcasting abilities. The primary spell was fungal growth. It was an instant cast aoe spell that stunned units for 8 seconds. In patch 1.3.0, that was changed to 4 seconds with an additional +30% damage against armored. In practical terms, this meant that fungal growths killed all of the staple units of the Terran and Protoss race. The floor of execution required for a Zerg to win was lowered while the floor of execution required for a Terran or Protoss to win was raised.

The second reason BL/infestor was so strong was that it simultaneously limited the options of Terran and Protoss players while exponentially increasing the potential options for the Zerg player. Terran and Protoss players had to refine and focus on build orders that countered the base infestor style. Even then, those build orders rarely equated to a 50 percent win rate. On the other hand, Zerg players had the entire gamut of builds they could use. Lee “Leenock” Dong Nyoung used that versatility to concoct a variety of cheesy openers to win games instantly. In the event that the cheese was stopped, he could easily transition back into a normal game without much of a hitch. Players like Lee “Life” Seung Hyun and Kwon “Sniper” Tae Hoon could play towards Muta/Ling/Baneling builds against Terran players and then revert to BL/infestor builds to close out the late game.

The third reason that the BL/infestor meta was ridiculous was that it ended all decision making branches for the Zerg race. In SC2, the games are often a negotiation between the players. If I get X unit, the enemy will counter with Y unit. In order to beat that, I have to do this Z action. When BL/infestor came into play, every Zerg player could always revert to the decision of making more infestors. Making more infestors was never a bad option, regardless of the game state. Whether you were in mid game, late game, end game, winning the game, or losing the game, the infestor was the philosopher’s stone of Zerg. It could answer all of the Zerg’s ills. 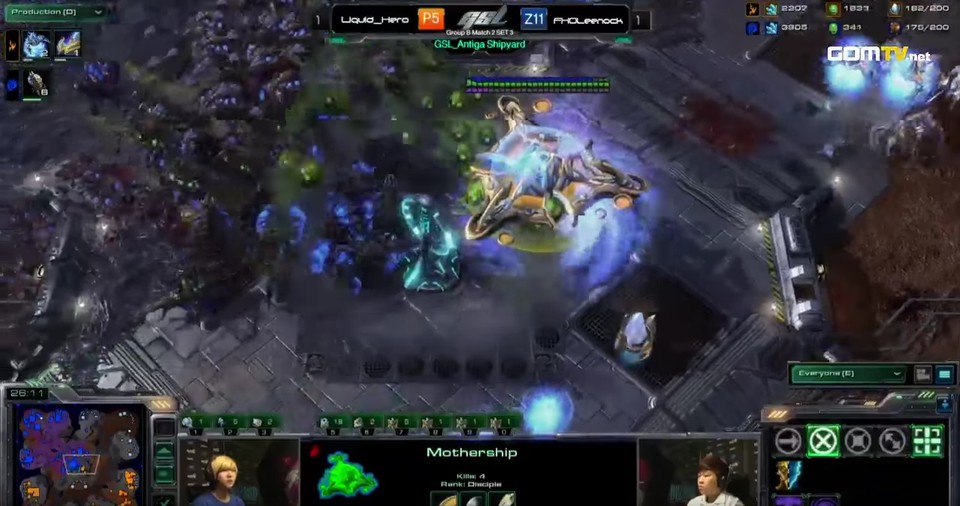 Caption: In this game HerO outplays Leenock for 28 minutes and is up 5 bases to 3. It doesn’t matter though, as Leenock gets one neural off and instantly wins the game.

The fourth reason why the BL/infestor was untouchable was that it also had an inherent comeback mechanism. Other builds and compositions require specific factors to come into play. For Muta/Ling/Baneling to beat Terran Bio, the Zerg player usually needs to be up a base as they are trying to overwhelm the Terran with their economy. In the case of the BL/infestor meta, the only requirement was getting to three bases. This wasn’t a problem as a majority of the maps in 2012 gave both players a natural three bases.

Even in cases where a Terran or Protoss player could force the Zerg onto two base instead of three, the Zerg could still win. The biggest example of this was Jung “YugiOh” Seung Il’s game against Won “PartinG” Lee Sak in 2012 Season 3 Code S group stage. The two of them played on Ohana and PartinG was able to contain YugiOh on two bases the entire game. If it was any other meta, that would be a death knell, but it was the BL/infestor meta. YugiOh just built a critical mass of infestors that dissuaded PartinG from attacking, and eventually, his death ball was so great that PartinG could not contest YugiOh in a battle, losing the game.

The final reason was artistic. Among all of the various metas that were played in SC2, BL/infestor was the most boring to watch. In a typical SC2 game, two players battled against each other using various attributes such as macro, micro, game sense, strategy, and tactics. In the BL/infestor meta it distilled down to a binary game. There were only two ways for a Terran or Protoss player to beat the Zerg player. They could either kill the Zerg before they got to the composition or they could hope that the Zerg player made a mistake that they could capitalize on.

Why BL/infestor was the worst meta in esports history 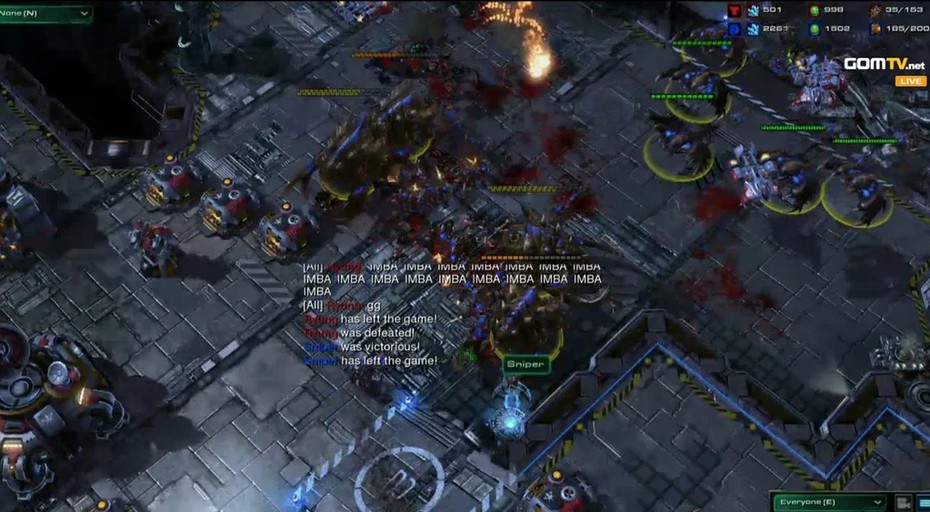 Caption: Ryung dying scream heard around the world as Sniper beats him in the semifinals of GSL 2012 Season 5. Later that day, TotalBiscuit punished Ryung by taking him to Cheesecake Factory.

It is one thing to say that BL/infestor was one of the worst metas ever. It is another to say that it was the worst meta across all games. There have been plenty of boring or bad metas throughout esports history: Ardent Censer in League, the rubber-band in Dota 2, GOATS in Overwatch, or the tec-9 in CS:GO.

There are two reasons why the BL/infestor meta was worse than all of them. The first is the asymmetry of Starcraft 2. In every other game I’ve mentioned, the metas affect all competitors. While there are some players who benefited more from the patch than others, at least every player got a chance to play with the same tools. Both teams in League can buy Ardent Censer. Both teams in Dota play under the rubber-band effect. Both Overwatch teams can play the GOATS comp. Both teams take turns playing the T-side and can buy the tec-9. In SC2, only the Zerg benefitted from playing BL/infestor.

The second is that no other meta in any other esport has boosted as many bad players as the BL/infestor meta did. There were multiple Zerg players who got far better results during the BL/infestor meta relative to any other point in their career. They were colloquially known as “Patchzergs,” or Zerg players that were purely boosted by one specific patch and never found success again. While the term has been misattributed, there were multiple examples that this term did apply to. Some of the biggest Patchzergs included Daniel “XlorD” Spenst, Kwon “Sniper” Tae Hoon, and Anton “LoWeLy” Plebanovich.

Xlord’s only notable result comes from HomeStory Cup VI where he placed third. Outside of that, he has no notable international appearances in the rest of his career. Sniper won GSL Season 5, got top four at Blizzard World Cup, and a top 6 at IPL 5. Outside of the BL/infestor meta, he was a Code A player. LoWeLy was top-four at WCS 2012 European Finals. Outside of that singular result, he has done nothing in his career. While there are many other examples, these three stand out as the prime examples of players who lived and died with the BL/infestor patch.

From past to present

All modern esports games are influenced by patches. As that is the case, it is critical for the esports community to reflect on the worst metas of the past so that we do not repeat those mistakes in the present. Among the various examples, BL/infestor is the epitome.

It did everything wrong. It forced an asymmetrical balance, lowered the skill floor, boosted players, simplified the decision tree, and made the game boring in an artistic and competitive sense. For my money, BL/infestor was the worst meta we have ever seen, and future esports devs should study it in hopes of avoiding it’s pitfalls.