ScapeGOATs and other reasons we're tired of OWL

Why is there a waning interest in the Overwatch League in stage 4?

Are you experiencing viewership fatigue? Yeah, me too.

Over the course of the season, I found myself less and less inclined to tune in. To be frank, I can’t exactly tell you why because that’s not how I or really anyone works. However, it is a statistical reality that many share this feeling with me. Concurrent viewership (and not the fairly irrelevant viewing minutes) has been on a steady decline. It’s hard to compare stage viewership across the season to year one as the second season runs a full month longer and started a month later and the time of the year has a considerable impact on viewership. That said, stage 4 of the season is Overwatch League’s worst stage in terms of concurrent viewers unless something drastically changes at the Los Angeles Homestand. Does any of the following sound familiar?

ScapeGOATs and other windmills

When viewership declined, many were quick to find the reason in the prevalent meta composition GOATs. Yet when the game changed fundamentally with the 2-2-2 role lock, it didn’t bring about renewed interest in the league. Perhaps one could argue that the decline would’ve been steeper, though I’m not sure if that holds up to the value of the stories that we lost in the process. Be that as it may, we received solid proof that GOATs wasn’t the main reason why viewers didn’t tune in anymore.

Generally, even when observing my own reasons for liking or disliking something, it’s hard to pinpoint why I did unless there is an aspect that stands out and really catches my attention. It’s rarely a clearly rational reason why I find myself disliking anything. Humans are too complex and lack the time for thorough introspection on the nature of their likes and dislikes and I’m no different. It’s the same reason why focus group input is hot garbage, people say they dislike reading about drama and still do, and why correlation isn’t correlation. We’re too convoluted for ourselves to unriddle certain things within us.

But I recognize and can't reject the outcome. I watch less. We watch less. It’s a little much. Please, Mr. Statsman, look at my user behavior, find my actual problems and solve them for me.

On Thursdays, I go through the schedule and decide which games I want to avoid and only later check up on socials if the excluded games had any worthwhile matches to watch. Being European doesn’t help but I don’t think it’s the main problem. For half of the matches, I can’t help but feel apathy.

And yet I feel a desire to have a holistic understanding of what’s going on with the teams in the league and I don’t feel well assisted by the surrounding spectacle in that. Perhaps I’m just disincentivized from seeking it out and that’s another windmill of issues I’m fighting. Overwatch League clearly isn’t designed for people with that kind of viewer behavior and is much more about following one team. I assume that wouldn’t tire you out as quickly and yet I wonder how many viewers catch more matches than just the ones of their favorite team. I contemplate if loving a game and being incompatible with the broadcasting structure is a deal breaker.

I noticed a considerable uptick in my interest after the mid-season break. I was filled with anticipation of the potential new Shock era, the Titans revenge and which challengers would chase them. Teams looked reinvigorated and brought about significant meta changes without patch assistance and I had stories to hold onto. I felt like those narratives took me by the hand and walked me home safely each week.

I think I like that the three week mid-season break was as long as it was. Shorter and it likely wouldn't have brought the same relief, longer, like the 6-month off-season, and I'd likely would've found myself annoyed and wanting. I think that’s what I liked but I can’t know for sure.

Could the next season changes help?

As we know from the leaked conference call, we likely won’t have a mid-season break next year and matches will be more tightly packed. Notably, there will only be approximately 29 weeks of competition and the entire season will conclude in late August, a full month sooner than this year. Moreover, games will only take place on Saturdays and Sundays. 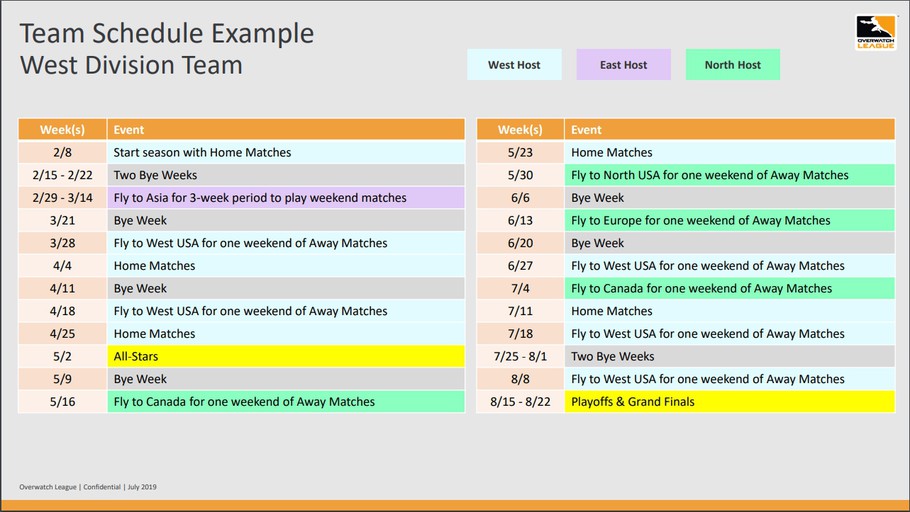 On paper, the loss of the mid-season break could mean that we don’t get to recover from viewing fatigue in the mid-season but perhaps it is less extreme when there are only two match days a week. I don’t know what the lack of stage playoffs will do to my perception of the regular season games, but I noticed that they refocused me by feeling more significant. Viewership number increasing during each stage playoff in comparison to the regular season matches indicates that you thought this too. Without stage playoffs, will that desire to watch spread out evenly across all the other matches or will it vanish into thin air? I’m willing to try but walk in with a furrowed brow.

My slight fear is that it will lead to a segregation of viewership into the different time zones in which we won’t get to share the matches with the same people that have been with us for the last two years. Perhaps that change must happen for a better experience.

I’ve come to terms that there are no easy solutions here as there are no easily discernible problems of signficant magnitude. The complexity of the system and the changes one could make cause the same limbo state of mind as when trying to imagine what lies past the infinite. My brain goes blank and reboots.

The best we can do is share our experiences non-judgmentally and create outside attractions as a community and to learn from the mistakes as Overwatch’s endeavor is a new entertainment frontier and we’re still not past the jungle. I hope we make it out alive as our early demise would likely impact surrounding ecosystems too.

The Overwatch formula has been changing so wildly on us over the last three years that it’s hard to find solids to attach to. In trying to find that perfect constellation of things that we want (and worse yet in moderation), we’re blindfolded children in a game of hot and cold in the middle of an echoing valley.

It’s vital to recognize the psychological rut we are in through previous circumstances and to be present about the fact that the trajectory of Overwatch has been on a meteoric rise. The introduction of the replay viewer, the workshop and 2-2-2 role lock points in one direction and one direction only. Perhaps we can sleep the fatigue off in the postseason and live that reality instead.