The final countdown - Week 4 in numbers

Some players we may never see again.

While the Overwatch League winds down to 14 matches this week, note that we will only have the grand finals left a month from now. Half the teams finish their regular season this weekend, and with #1 Vancouver and #2 New York off this week, let’s break down the realm of all remaining possibilities with Eric Doerr.

Starting at the Top

We know the San Francisco Shock to have no chill. Locked in the third seed, they still hold massive influence over the final play-in spot with games against the Hunters and Valiant remaining. Will they show mercy and allow for a Striker/Nevix appearance for fan service or could they be giving the Valiant a Kit Kat rivalry break? Going by how they carried themselves this season, it is unlikely.

For potential playoff opponents, Shock’s strength is a good motivator to seek seed 4 or 5 over seed 6: 4 & 5 avoid San Francisco for at least two playoff rounds. For whom this may concern?

We have five serious competitors fighting for seeds 4,5,and 6. Earning 17 wins guarantees top 6. 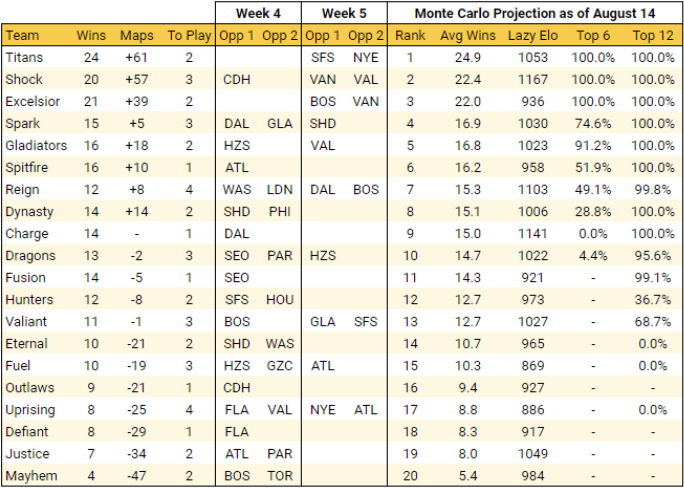 One of the marquee matchups this weekend pits the Los Angeles Gladiators against the Hangzhou Spark. If the Gladiators win this, they lock in the fourth seed and avoid San Francisco for at least two playoff rounds, a very desirable prize. Given Spark takes care of Dallas, beating the Gladiators would lock Hangzhou into the top 6. Making the season playoffs means $200,000 minimum prize money, so this match is financially comparable to a Stage playoff final.

What makes the most dangerous opponent? If its desperation, then put the Seoul Dynasty on alert. Both of their opponents have long been considered top 6 contenders, but in certain circumstances risk total embarrassment: face planting outside of the top 12.

First up, the Shanghai Dragons, our Stage 3 champs, could return to being playoff chumps in ~5% of projected scenarios, and that doubles if the Dynasty slay the Dragons. Shanghai has two wins on the Valiant and would likely have to lose all three games to drop out of 12th place. Do they pull a Daenerys and bust a three Dragons lead?

Second, while the Fusion are 99% locked to make the playoffs, that bottom 1% outcome would be franchise shaking. Their org has invested huge money into this team, their academy, this season’s finals, and their future arena. Having the 2019 Fusion fizzle out of the playoffs could trigger a nuclear offseason. That said, the inner expectations of the organization for season 2 could’ve been to consider it a gap year until Alarm and co. come online.

The Dynasty will have to prove their own mettle against desperate opponents, though given Seoul’s record and map differential, they are well positioned to finish 5th-8th.

Even if they miss top 6, a 7th or 8th seed means a play-in bye, requiring one play-in win to confirm a September spot. This isn’t too bad, unless you carry the expectations of a true Dynasty fan...

Reign in the Forecast

This week marks the return of Atlanta to the schedule, with two headline matchups that will declare an unofficial stage 4 champion and set Atlanta’s week 5 goal to securing either top 6 or top 12.

Starting with “things you never expected to care about,” the unbeaten giants of stage 4 throw down Friday. One of these teams will take their first stage 4 loss, igniting community comments on strength of schedule paper tigers.

Then on Sunday, the official Match of the Week carries top 6 implications. London locks in the playoffs if they beat the Reign, while an Atlanta winning streak gives them the inside playoff track with Dallas and Boston remaining.

Within the game, the new Role Call awards enhance an already tantalizing DPS showdown between Erster and Profit.

The race to the bottom is down to four competitors seeking to avoid 13th place. The aforementioned Fusion and Dragons are 95% in, leaving the Valiant and Hunters in the Thunderdome.

The Valiant control their own destiny, winning out guarantees they make play-ins, but that includes brutal opponents. In fact, Valiant fans may want to root for their week 5 opponents and California rivals this week. A Gladiators win over the Spark secures the purple helmet warriors the 4th seed and gives the legion more reasons to focus on Sigma and September over preparing for next weekend’s Battle of L.A. Likewise, San Francisco faces the Hunters this week, and a Shock win gives the Valiant an extra game of breathing room to make the play-ins.

The league’s hierarchy was shaken to its core. While many of the top teams try to mend these fissures, the opportunity for lesser teams will mostly maneir last official Overwatch League matches of the year, a last look at surely soon changing rosters. The odds are that we’re unlikely to see some of them bacifest in week 4 and only in few cases in the anticipated Los Angeles Homestand. Not only will we get to see high stakes but also high skill matchups. Some play-in and play-off stories are just beginning, other tales come to an end. For teams like the Outlaws, the Defiant and the Mayhem, this week will have thk next year. As sad as that may appear to see career and dreams die, they make room for young hopeful challengers and the league will be once more renewed.