Overcoming a chronic illness, Bischu’s return to OWL nothing but amazing

The Guangzhou Charge were up 3-0 over the Boston Uprising, having achieved victory before the final map had even begun. Soon after Guangzhou’s six starters left the stage, the Blizzard Arena’s quiet confusion quickly turned into an enthusiastic roar as two of the most beloved players in the Overwatch League took their places. For the first time in over a year, Bischu and Fragi were competing - and winning - at the highest level.

Aaron “Bischu” Kim spoke with Upcomer directly after his aggressive Roadhog play helped lead the Charge to the map win on Havana. Sharing his story of strength in the face of chronic illness as well as the importance he placed on returning to OWL, it is clear that Bischu has returned, and is here to stay.

Congratulations on winning your first map as a member of the Guangzhou Charge! What was going through your mind?

It’s actually the first map of the season, because I hadn’t played with the Gladiators this year, so this match meant a lot to me. We knew we would play this match if we were up 3-0, so it was pretty safe. So even though it wasn’t a really important thing, I was still really happy that we won and secured a map win for our team, those things really add up. In that vein, I’m super grateful to Guangzhou’s coaching staff because it’s not that easy of a decision to make because every map win really counts. But despite that, they still put the whole sub team in.

To be honest, I was really surprised, I didn’t think they’d put the entire sub roster in, I thought it was just going to be one or two of us at most. So when we did that, I was a little bit nervous, like oh shit, we haven’t been practicing that long [laughs]! But I’m really happy that we pulled it away and were able to secure the win.

Going back to the beginning of the season, was there ever a concern that you wouldn’t play on the Blizzard Arena’s stage again?

Very much so. That was also a reason why, even though I love Glads, I love everyone from there, the fans, the players, staff, they’re all great. But this was a decision that I made for myself because as a professional player, not being shown in the Tier 1 scene for a whole year is incredibly damaging. So in a way I was okay, kind of getting comfortable, like I wasn’t getting play time but I still had a job. But I didn’t want that. I wanted to make the decision to put myself out there and I’m super glad I did. Again, super thankful for the coaching staff who made it happen.

What was the process of getting traded to Charge?

Glads is a really good org, as a player. Same thing that happened with Fissure last year, even though things didn’t end too well, Glads was more than okay to let him go where he wanted. It’s an incredibly smart decision by the org, because holding a player who is unhappy is never good. Plenty of orgs still do that for money, but Glads was always really open about that stuff, if you wanted to look for new opportunities, they wouldn’t hold you.

I’m super happy the transfer was very smooth, except for the move [laughs]. I love my room in Glads, I made it super nice and cozy, but I was like, “oh God, how do I move all this?” That kind of sucked [laughs]. It’s been almost two weeks and I’m still not done unpacking. It’s everywhere!

We saw a very sweet moment where we saw you waving to your former Gladiators teammates during your interview. How much does their success still mean to you?

My answer may have been different if we played them [laughs]! But now that we aren’t playing against them, I think they can 100% do really well in playoffs once they make it. I honestly just wish only the best. I’m still really close to all of the players and staff and want them to do well.

You were open with your struggle with ulcerative colitis at the beginning of this season, leading to you stepping back and becoming a two-way player. Did playing with Gladiators Legion help you during that time?

For sure. That was a really hard decision because as an OWL player, when you move down it automatically looks bad to orgs and teams. So I wasn’t too sure about that decision, but at the end of the day, every single pro needs playtime. Playtime is so important, if you don’t get any playtime, you’re going to be worse than a Contenders player in a few months. Sure, you can play solo-queue, but it’s not the same environment, you won’t learn the same way.

I made the decision to go down to Legion and it was a really good decision for me because I took a different role than the one I had on Glads. It was more of a role where I was trying to help them get better. I was really happy that a lot of the members on Legion were very receptive and so motivated. At first I was worried they’d be like, “who’s this guy who thinks he can come to our team and tell us what to do!”[laughs], but it wasn’t like that. They took it so well, and I’m so grateful they were so motivated to play. I like to think I helped! 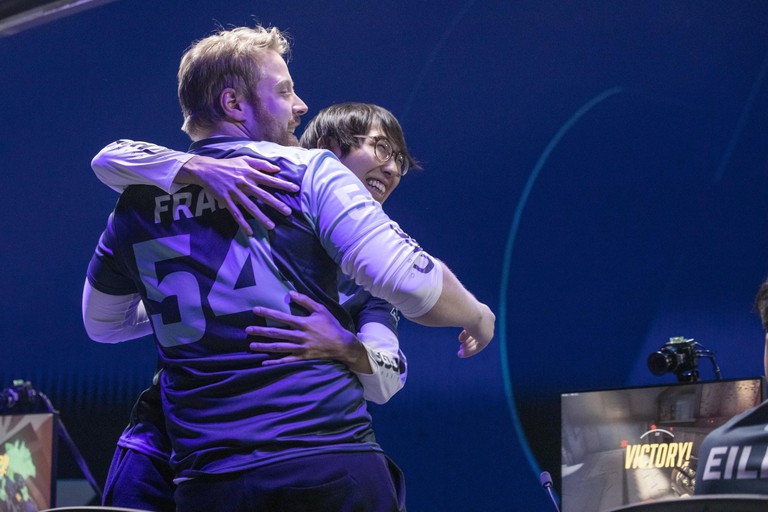 As a flex tank, not only have you transitioned teams, but the meta has also shifted. Does your role mean anything different now due to the 2-2-2 role lock?

When you normally play D.va before as a flex tank, I think it was mainly about supporting the team rather than shotcalling. There’s only so much you can do, because unless you’re using your ult, D.va doesn’t really initiate anything, she’s a real supporting role even as a tank. Now that I’m playing Roadhog, the things I need to say are different, the way I need to play is different, and to be honest, before this meta I never really played Hog. I didn’t really have to.

It was a lot of catching up, but when I was, the other players had to catch up too. This meta, going over to 2-2-2 when I was joining a new team, was probably the best thing that could have happened to me. It gave me a relatively even starting point. I’m not going to let this opportunity pass me by.

How difficult has it been to transfer teams after the trade went through? What does that process look like?

It was a little hard. The first week was really rough just because everything is different. A lot of teams do relatively the same thing in the way they coach, but the callouts, who is the main shotcaller, what vocab they use - for me it was extra hard to learn. On Gladiators we just used English and Korean, which I could directly help with. But now there’s two Chinese players that I play with a lot, so that’s another difficulty. I think I’m so used to working with players who use different languages, so it’s somewhat more natural for me.

Other than that, I think it was just a week-long confusion filled state but I’m finally getting into the flow of it. And I just want to say everyone on Guangzhou is super friendly, I just didn’t know what to expect. I knew who was on the team, but I didn’t know anyone personally, what they’d be like. I was worried and didn’t know what to expect, but everyone has been super friendly, the staff has been great. Our team house is pretty big too. It hasn’t been that hard, they’ve been working with me a lot.

And I obviously have a stomach issue, so they try to accommodate that for me too. At this point, I’m very aware of how my body works and how that illness is triggered, so I’m just trying to minimize the triggers and keep my body in shape. It’s just really unfortunate, because it’s triggered by a lot of stress, but I’m a professional gamer who needs a little bit of stress to get better, you know? So it’s a balancing act, but I’m completely fine with that. I’m willing to do that if I get to play as a professional. It’s my dream.

Even when I was on Glads, they were genuinely worried about me, they’d be like, “Bischu, being a professional player isn’t the only way to stay in the scene. It might be best for your long-term health if you go into a staff member role and start committing to that to take care of your health better.” It’s not like I didn’t think of that before, it really sucks when you’re life is just consumed by illness. But I’ll just figure out how this thing works, and I’ll continue to be a player, it’s not something I can easily give up just like that.

Do you have any advice for those who are also struggling with chronic illness?

I think anyone with these illnesses have phases where you need to carry on with your life but you literally can’t. It’s often not a condition that shows easily, and it can be pretty frustrating at times when other people don’t understand. But if it’s something that you really love, you need to find a way to deal with it.

You need to find out everything you can to control it, whether it’s just stress related, diet, or your lifestyle. People have different ways to do that, like I love peppermint tea, it soothes my stomach so well. But as you deal with illness, I’m sure everyone will find out what helps them. So write all of that stuff down, all the things that help you - listening to music, exercise, the foods you eat - and hopefully that will be enough to control your illness over time.

If it’s something you really love, just remember all of the times you enjoyed that, and it might be really difficult to when you’re dealing with all this shit. But just remember how much you loved it, and keep working hard. I know it sucks so much [laughs]! And this might sound like when someone asks “how do you be a good Widow,” and you just get “click heads.” People with chronic illnesses are dealt a really bad hand, but to do what you love, you just have to deal with it. There is no other way.