By the numbers: OWL teams in the race for season play-offs

Stats for each team’s chances of playing in September.

OWL teams are heading down the home stretch in pursuit of the best possible postseason positioning. Given the three stages behind us, we can start with the current standings, take a look at the upcoming schedule, and apply math to generate reasonable expectations.

In the running for the Season 2 playoffs

Let’s first set the bar on what it takes to make the playoffs. The top six teams in the season standings get a direct ticket to the post season playoffs and a minimum of $200,000 in prize money of the $3,500,000 total prize pool.

Teams placing in 7th-12th will participate in a play-in tournament, seeded into two mini-brackets where the winners will qualify for the final season playoff spots and a piece of its prize pool. In particular, teams placing 7th and 8th have the inside track in that each only needs to win one match to punch their golden ticket.

That being said, how many season wins will it take to compete for the 6th and 12th places in the season standings? Per a simulation by Eric Doerr, the 6th seed will likely have at least 17 wins while the 12th place will require at least 13 wins.

And down the stretch they come...

With those cut offs in mind, here are the team-by-team Monte Carlo results on the final projected standings, complete with odds of playing in September. 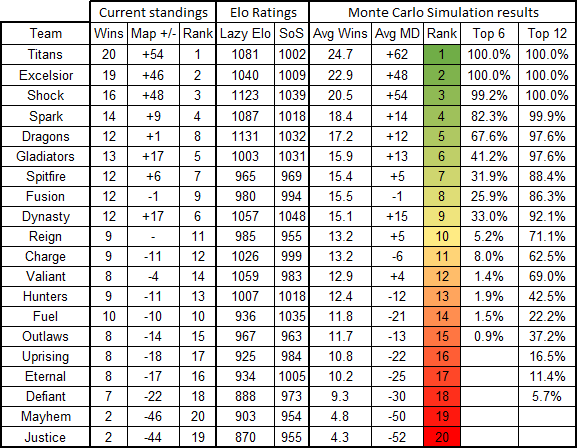 As we can see, both the Washington Justice and the Florida Mayhem have been mathematically eliminated from play-off and play-in contention. Furthermore, the Uprising, the Eternal and the Defiant have no way of clinching the play-offs directly without going through the play-ins. Both the Vancouver Titans and the New York Excelsior have already qualified for the play-offs and are merely playing for seeding as the front-runners. With the second best team in the Atlantic division being the London Spitfire at 12 wins and NYXL sitting at 19 victories and a map advantage of impressive +40 maps on the Brits, there are few theoretical scenarios that would deny the NYXL a wire-to-wire finish atop the Atlantic division, less when considering that they have an average strength of schedule (1009) left in the season.

Of particular interest are positions beyond the certain winners and losers. Especially the Shanghai Dragons, on the back of their strong play-off run, are projected to make a big jump to 5th place. On the outside track, with the strongest remaining strength of schedule, the Dynasty might lose their play-off spot and worse yet, potentially even a first round bye in the play-ins. The simulation also isn’t particularly encouraging for the Dallas Fuel, who had been in a free-fall through the rankings in stage 3 and their remaining schedule doesn’t bode well for their play-off or play-ins chances.

Which horse are you betting on?

First off, Eric Doerr once again provided the relevant Google Sheets spreadsheet here. This workbook can be copied to your own Google account so that you can generate simulations after setting your own assumptions. Good luck, nerds.

Win probabilities are calculated on an Elo basis, with ratings sourced from Overwatch League stats producer @CaptainPlanetOW. In short, these are set around 1000 with k=47, with a Margin of Victory component (see the full article). As his final Stage 3 ratings were posted on July 15th, Elo ratings were regressed 60% to the mean before use in the schedule simulations.

From there, Monte Carlo simulation was done on the rest of the regular season. In other words, dice were rolled 10,000 times and results were aggregated to arrive at the aforementioned numbers.

A Glimmer of Hope

For teams with an especially rough projected schedule, they can either hate math or take solace in the fact that a significant meta change can seriously shake things up. For instance, Dallas is currently in the top 12, but the base projection has them as underdogs in all of their stage 4 matches. A big shift in the meta increases their chances by both giving the Fuel a bigger window to be a better team and also allowing each of their currently-above-average opponents to regress. This favors current standings incumbents and, in reverse, temper the hopes of teams with perceived weak schedules relying on a projected hot streak, like Houston or the Valiant. How big of a difference does a meta switch as severe as this one make?

Looking at the table above, both the 6th and 12th seed races are open to a wide and compelling pool of contenders. Two months of high stakes Overwatch lie ahead of us. For a select few, it will come down to a photo finish at the Los Angeles Homestand, not least for the dark horse that is the Los Angeles Valiant. With a completely new meta and many teams still fighting for their season, volatility and uncertainty, the prospect of assured bliss and agony but most definitely thrilling excitement lays thick in the air before the start of stage 4. Most of the teams in contention have shown performance peaks and valleys across the season and it is on them to spur themselves on for the home stretch.