The power of the LA Valiant's process

How the team learned to soar again after changing their culture.

The Los Angeles Valiant’s return to prominence is one of the most impressive redemption arcs in the Overwatch League’s short history.

To go from a winless Stage 1 to defeating the best team in the world, the Vancouver Titans, and becoming a dark horse favorite to win the final stage playoffs of the season, the Valiant required wholesale changes. General Manager Mike Schwartz and interim head coach Mike “Packing10” Szklanny worked hard to lead the team in a new direction, but understanding that process requires a look back at a time before any problems surfaced.

During the Inaugural Season, the Los Angeles Valiant finished the regular season in second place, with a 27-13 record. A constant sense of mystique surrounded the team, as no one could pinpoint the source of their strength. Their ability to perform so well as a unit without any outstanding performances from star DPS players proved the team had an intangible quality.

The Valiant maintained this quality through a coaching change. Despite a solid 7-3 Stage 1, Immortals Executive Chairman Noah Whinston made the decision to let go of head coach Henry "Cuddles" Coxall and bring Byung-chul "Moon" Moon in before the start of Stage 2. This resulted in an initial drop in performance and a 4-6 record for the stage, but the Valiant bounced back to a finish of 7-3 and 9-1 in Stage 3 and 4 respectively. By the time the season wrapped up, the Valiant were easily the best team in the Pacific Division.

As a result, expectations were high for the Valiant going into the league’s second season from both fans and the team itself. But according to Schwartz, turmoil struck almost immediately in the off-season.

When the team reconvened under Moon’s leadership in October, they did so without assistant coaches Jordan "Gunba" Graham and Julien “daemoN” Ducros, who both left for new teams. Dong-soo "Dongsu" Shin and Packing10 replaced them shortly after, and the team was ready to ramp into serious practice well before the next season started.

However, the Valiant were notified by the US Citizenship and Immigration Services (USCIS) that there had been an error in how the player’s visas were handled.

“We got notice of intent to deny, which basically meant, ‘Get out of the country,’” Schwartz explained. “[The team] basically lost their whole preseason of practice to sort out our visa problems.”

So, even though staff had identified weaknesses in both the team’s strategies and the player’s individual roles, coaches couldn’t work with players in person until January. Meanwhile, high ping significantly hampered the quality of whatever practice they did get.

“We were scrambling to make things work,” Schwartz said. “Everything that could’ve gone wrong went wrong.”

To make matters worse, the Valiant pinned their future success on the hope that GOATs would fall out of favor once the season started. Packing10 attributes this mistake to discord within the coaching staff at the time and a general lack of feedback for the players.

“We weren’t really aligned 100% on all the decisions that we wanted to make,” he said. “[The players] didn’t really know what was happening behind our doors.”

Schwartz agreed, stating that even if the team had found success in Stage 1, it would have been short term based on the issues they were having. The coaching staff change would have happened either way. 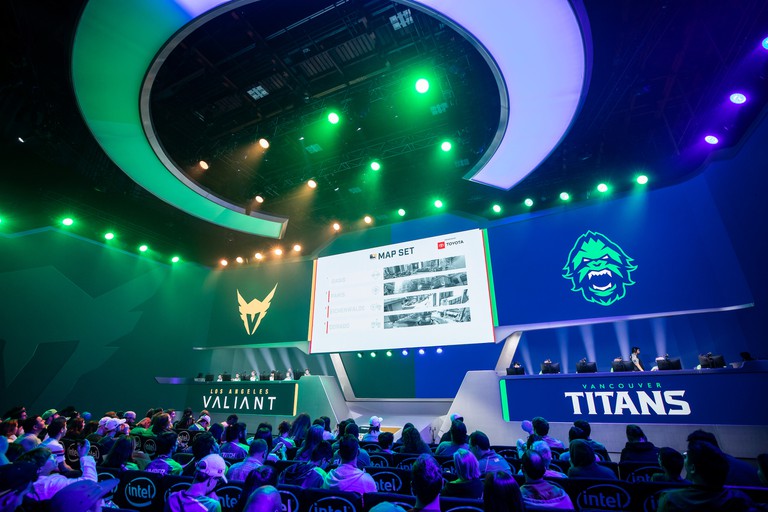 Working off the premise that the Valiant had talented players, Schwartz said he believed the issue had to be in the team’s cultural fabric. Since the staff were responsible, he took a top down approach to find the person he wanted in place to lead. That way, if Schwartz knew the coaching staff was functioning properly despite continued losses, the team would know the roster was the problem.

Consequently, head coach Moon was let go and Packing10 was installed as an interim head coach. The team also brought on Marvin "Promise" Schröder and Justin "reprize" Hand to fill in instrumental roles within the coaching staff. Both Packing10 and Schwartz said they were extremely thorough in their hiring search for new coaches.

They even said Promise had been surprised about the length of his initial interview. Whereas he expected a 15 minute talk, the interview turned into an hour and a half long, in-depth discussion about professional Overwatch. According to Schwartz, Promise mentioned to him that he had never been so thoroughly vetted for a job in Overwatch before.

With a new staff in place, Packing10’s said his next goal as interim head coach was to clearly define everyone’s tasks on the coaching staff so that everyone knew what everyone else was doing. According to him, that isn’t common in competitive Overwatch.

“What you happen to see, and a lot of teams do it in Contenders and Overwatch League, is everybody tries to do everything,” Packing10 said.

As GM, Schwartz said his job is to make sure the other coaches can do their job, while helping Packing10 with structuring day to day operations. Packing10 also took on individual coaching duties alongside Promise. This entailed long, one on one sessions that improve player performance. Schwartz offered Promise teaching Johannes "Shax" Nielsen how to play a high-level Sombra in a short three days after joining the team as an example.

Reprize was put in charge of scouting the oppositions. This involved, among other things, figuring out the routes opposing Sombras used. This allowed Valiant players like Indy "SPACE" Halpern to spot-check those positions and zone out the enemy.

Warsi Faraaz "Stoop" Waris, a former pro player and one of the remaining staff members from the successful season 1 roster, took on the development of the overall team strategy. This big picture planning is informed by reprize’s scouting reports.

To come together, the coaching staff has frequent, long meetings to coordinate their approach while also communicating with players. Packing10 said this kind of structured, passionate, and communicative approach were the attributes of a functioning coaching staff.

The power of process

Still, Packing10 said he knew it would take some time before the Valiant soared back to the top of the standings. He attributes that discipline to his personal experience in the marine corps, as a recent college graduate, and as a new father.

Still, he added it was important his team understood things wouldn’t change overnight. In his first meeting with the team as a head coach, Packing10 said he told players they would have to change their team culture.

To achieve that change, the head coach instilled a sense of gradual, daily growth in his players, as well as a system of team accountability. Not only would coaches hold players responsible for their actions, but they were asked to check in on their teammates when necessary.

Outside of patience and accountability, Packing10 said his greatest battle is passing on the same discipline he has to his players.

“Complacency becomes a huge issue at times,” he said. “When we beat Vancouver, we had our little discussion after in the player room and the first thing I said to them was, ‘It’s a great job. You just beat the best team in the league but understand, we should’ve won that 4-0.’ You can never ever ever become complacent.”

The importance of belief 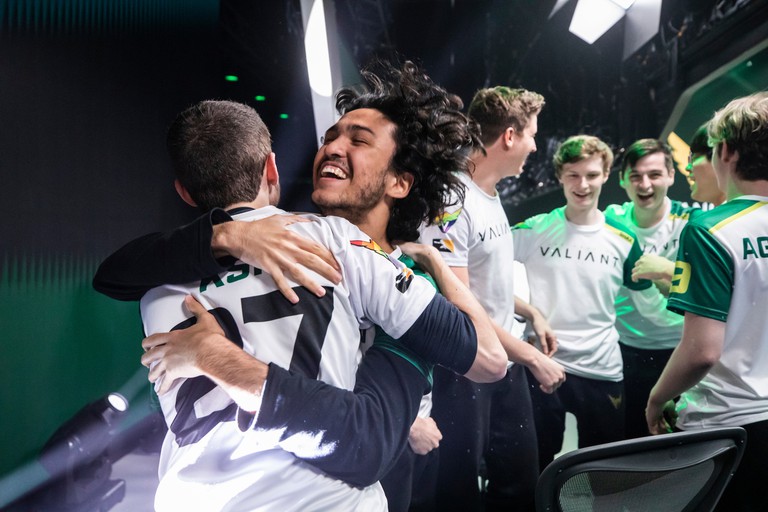 As a result of the Valiant’s new process, Packing10 said his players started changing. Instead of looking out for their personal best interest, they started believing in the greater good of the team. This belief even helped players work toward their own improvement. Packing10 recalled a specific conversation with Kariv that occurred after taking over the reins in Stage 2.

“That’s what he said to me, ‘I don’t care if I play stage 2. I think I’m a great flex support. I want to play flex support,’” Packing10 said, explaining that Kariv saw his potential to start over Min-chul "Izayaki" Kim. “He needed someone to help him and enable him to do that.”

The coaching staff accordingly put in a lot of hours to not only help him improve but to understand that it’s a process.

This same belief manifested differently in SPACE, who came to the coaching staff and requested that Shax should play ahead of him. According to Packing10, SPACE realized Shax’s Sombra was better than his, and that the team needed his teammate’s skill front and center.

“When selfless things like that start happening, that’s when you know you start getting the culture in the place that it’s supposed to be in,” Packing10 said. “That’s when you start seeing the really big results and the turnarounds.”

Schwartz agreed with the sentiment, mentioning that SPACE and Caleb “McGravy” McGravey were the first ones to share in the team’s success on stage during the Vancouver game. The general manager added that it’s common for McGravey to pop into the dugout to jump on the microphone and talk to players.

“For somebody who is on the bench, who can just do that and just pop in and be that positive force, that’s the stuff we want to see,” Schwartz said. “We know we have a good culture.”

Once the Valiant were in a position to succeed, the staff started deciding on goals. They initially settled on a goal of reaching the Stage 3 playoffs, but now that the team has achieved that goal, their ambitions have diverged.

Schwartz is committed to an achievable yet challenging goal for the Valiant, who are currently sitting in 13th place and with a reasonably tough stage 4 schedule ahead of them. His goal is to simply make the play-in tournament, which the seventh through 12th teams qualify for. The Valiant are right on the cusp.

Meanwhile, Packing10 has higher aspirations. He wants to get his team to a place where they can compete for the league title.

“I’m not satisfied unless we win every single game, and that’s just how it’s going to stay,” Packing10 said. “For it to be a successful year for me, it’s winning the whole thing.”

This lines up with the first time Packing10 met the Valiant CEO Ari Segal for the first time. When Segal asked Schwartz how the team would finish Stage 3, he said he expected a 4-3 record and an 80% chance to make the playoffs. His head coach had different ideas.

“Packing comes in and says, ‘We’re going 7-0, we’re going to be undefeated,” and I was like, ‘Jesus Christ!’” Schwartz said. Barely done with his sentence, Packing10 immediately replied, “And we should have been too, Mike.”

The Los Angeles Valiant will compete in the stage 3 playoffs tonight against the Hangzhou Spark. The two teams last met two weeks ago, and the Valiant narrowly lost in a battle that went on until the very end.