Sideshow: "Shock’s slip was certainly in part due to a lack of motivation."

Stage 3 playoffs are only one day away. Statistically, the weekend promises to be an explosively exciting send-off for the 3-3 meta. In this interview, Overwatch League desk analyst Josh "Sideshow" Wilkinson brakes down the individual strengths and weaknesses of the playoff teams and explains why he think that we’re in for the best Stage playoffs in OWL history.

What do you think was the reason for San Francisco Shock’s decline in performance this stage?

Shock’s slip was certainly in part due to a lack of motivation. The players seemed hyper-motivated in Stage 2 to get revenge on the Titans and refine their style of GOATs. The coaching staff had a vision for a ‘perfect’ style of GOATs play and Shock’s players were hungry and smart enough to learn that style and execute it phenomenally well. They made almost no mistakes throughout that Stage, but that level of consistency is not replicable forever, especially once they had already achieved their goal and taken down the Titans. Immediately afterwards, in their first few games of Stage 3, they looked like a sloppier team that had lost the fire. It’s understandable, of course—no team can maintain that kind of ridiculous performance forever, not losing a single map across five weeks of play.

The other obvious component is the introduction and refinement of Sombra compositions. In the first half of the season, only Shanghai had properly experimented with Sombra. She was known to be the most powerful individual hero in the game but popular opinion agreed that strong, aggressive GOATs play would beat it.

In the midseason break, more teams learned how to win neutral engagements with Sombra Hacks. Rather than relying on EMP, teams figured out multiple ways to win based on single hacks, whether that was baiting engagements and abusing the slower Lucio Speed Boost to get hacks on key targets in the backline, or holding the EMP and playing for hacks in the frontline while the Reinhardts trade aggression.

It’s very difficult to maintain consistency against Sombra teams unless your backline is playing at an incredible level in every match. Shock have been sloppy at scouting and repelling Sombras this stage and it shows in their results.

I don’t think they understood why Sombra GOATs became meta. This composition is all about understanding how the ultimates rotate and how to win the neutral fights; Titans were running it like a GOATs comp with an EMP every now and then while simultaneously failing at DPS mirrors as they had Jjanu and Bumper both in.

To be fair to Titans they did make an attempt at adapting to the new wave of Sombra GOATs, attempting to put Seominsoo on the role. It’s a fool’s errand to try it though as it put Jjanu on Zarya and took Seominsoo off the hero that he was arguably best-in-world at and plopped him onto a subpar Sombra.

They forced it pretty hard, valuing the intramap flexibility over running the best possible roster on each map and sticking to a composition. I think they’ve finally realised after losing to the Valiant that Seominsoo needs to stick to Zarya and Stitch can play that Sombra. It gives them a triple DPS look that’s very competent and Stitch looked very effective on Sombra—far better than Seominsoo.

If the Titans can come into playoffs and repeat the level of play they showed against the Gladiators, they should be considered the overall favourites. 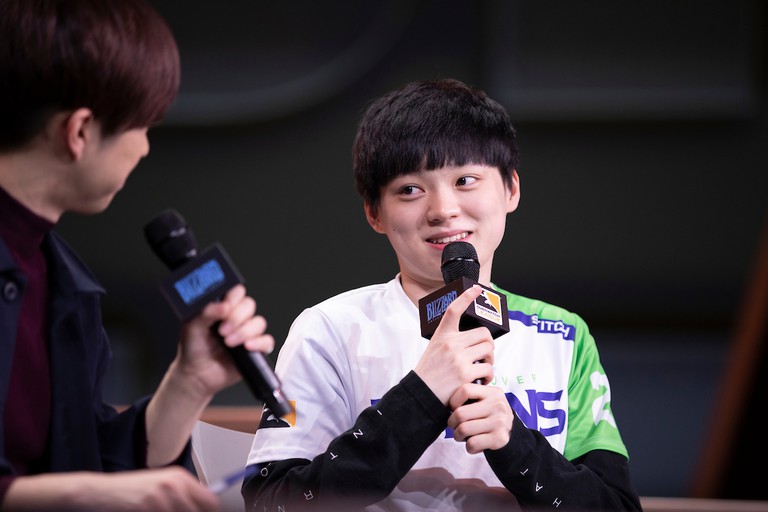 Seoul Dynasty have employed an unprecedented approach towards roster building and making use of their talent. Do you think this will help or hurt them in the stage playoffs?

Seoul’s coaches, especially KDG, deserve great credit for making it work as well as they have, but I’ve always been of the opinion that Seoul’s experimentation with their roster splitting will hurt them. It’s impossible to know what would have or could have been had Seoul stuck to a roster and dedicated all their resources there but they should be in a similar position to Spark. Instead Seoul are a team that play a variety of compositions and styles to a mediocre level, not enough to beat the top teams at their own games.

The Outlaws have had a wide divide in performances over the stage, playing the NYXL close, winning against the Shock but also losing against the Mayhem. Are they the real deal?

Nope. The Outlaws have Danteh and an intuitive sense of how to play around him, giving him the right resources to be effective and playing their ults relatively well. They were early adapters of the meta and pushed people into uncomfortable zones before the new Sombra GOATs / DPS comps were figured out.

When it comes to positioning and individual talent though, they are the kind of team to gift the Mayhem free wins. I hate to reprise my role as the Outlaws shit-talker but I think they’re gonna get rolled against Titans and would get rolled against almost any of the stage playoff teams.

Huge props to them for turning their season around though and making stage playoffs in the first place. That’s a hell of a comeback from 0-7 and speaks to the synergy in this roster.

The Valiant coaching staff has stated that they are going to practice hard for the stage 3 playoffs and intend to win it all. What do you think of this decision considering that a tough schedule lies ahead for them in stage 4 which they could practice for instead?

Teams are not seriously scrimming with Stage 4 in mind yet. Although it sounds wonderful on paper to allocate free time preparing for those matches, it’s impossible to predict the meta and the good teams will not want to scrim on that map pool unless there is a widespread gentleman’s agreement. It’s also not public knowledge whether there are balance changes coming before Stage 4.

Valiant have a real chance at victory in Stage 3 playoffs, and a decent shot at making the 12th place overall to reach the play-in tournament. Both are feasible goals; going deep in Stage 3 playoffs should not realistically impact their preparation for Stage 4 and would provide a morale boost if anything.

The Dragons lost one of their homestand matches against Guangzhou Charge. On paper, the Charge are a lower mid-tier team based on their stage results. Does this concern you for the Dragons’ stage playoff run?

Weirdly, the Dragons are one of the most disappointing teams this Stage despite ending 5-2. They should have been dominant in a meta that revolved around Dding’s Sombra and DPS mirrors. Instead, their team was sluggish to innovate and didn’t remain at the forefront of the pack. Dding took too long learning how to maximise his impact on Sombra, perhaps due to his forced split gametime on Pharah as well. Shanghai are a strange team because of their read on the meta and YoungJin’s hero pools, choosing to field him on Roadhog, Brigitte, or Doomfist when Dding and Diem are on their individually incredible Pharah and Widowmaker picks. It’s a messy composition that leaves Gamsu high and dry and compromises between supporting the playmakers and trying to keep space.

I’m not expecting Shanghai to go far in the playoffs unless Diem and Dding hard carry the rest of their team to victory.

How do you rate the overall quality of teams in the stage 3 playoffs?

This is clearly the best stage playoff we’ve had in OWL history, partly because there is no dominant frontrunner.

Titans have looked shaky but appear revitalised with Stitch in the lineup, albeit with a sample size of one match; Shock have dropped series to Outlaws and Chengdu, proving they can lose to anybody on an off day; Spark are incredibly consistent in their GOATs play, particularly against Sombra teams, but may well lose a mirror against the other Stage Champions; NYXL are undefeated, yes, but against poor opposition and were taken to five maps by Dallas, the only team to challenge them with an intelligent counter Sombra. And then there’s Valiant, who began the season 0-7 and have already lost to their quarter-final opponents recently but seem to have the best grasp of the meta right now.

The winner of Stage 3 may not be the cleanest team we’ve ever seen—but the tournament will be electric.

Could you walk us through how you think the bracket will play out? Who do you think will take it?

My personal opinions collide somewhat when considering the bracket. It’s an impossible one to predict with any certainty.

Vancouver Titans should be considered the favourites if they can keep up the level of performance we saw from them when Stitch was in the lineup against Gladiators. They have scary coordination, a great trio of DPS players to mirror teams with, and Stitch looks comfortable on Sombra.

However I believe that the winner of the Valiant/Spark quarter-final match will take the tournament. In that match there is such a clash of styles—the team with the best understanding of the meta and how the compositions play into each other vs. the team with the best backline against Sombras. Shax will have to juke and dodge IDK and Adora (along with Ria’s scouting) while communicating very effectively to pull out a win, but if Spark’s backline cannot execute incredibly consistent shutdowns across the series then Valiant can run away with it.

Assuming the big three also advance, that would put Valiant up against NYXL—an eminently winnable match-up—and Spark against the Titans in a rematch of the series that they threw away in Week 2. Insanely sick matches will ensue from there out. It’s gonna be nutty.