OWL Stage 3 playoffs will be the most competitive to date

The numbers promise an exciting time.

Stage 3 playoffs are upon us, and fans are in for a treat. Up to this point, the 2019 OWL season has been largely dominated by the top three teams. Now the meta has shifted, adding uncertainty and evening the playing field. This coming week of games should offer significantly more competitive matches than in past stages with a large pool of true title contenders.

To quantify the above, E. Doerr took an Elo rating model and generated odds to win for each stage playoff.  Elo ratings have been popularized in chess and also used to explore win probabilities in professional sports.  For this exercise, Doerr’s calculations are based on the follow-worthy @CaptainPlanetOW Lazy™ Elo ratings, with some back of the envelope estimates for earlier stages. 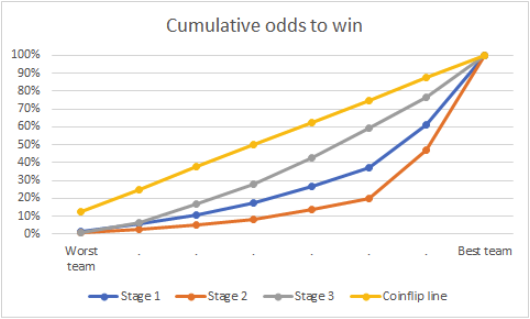 In Stage 1, only three teams hoarded more than 70% of the win probability. “The big three,” namely Shock, Titans and NYXL were already showing their dominance and started laying the groundwork of the narrative. While NYXL flaked out unexpectedly against Dynasty, Shock and Titans trounced their opposition, not dropping a map. Despite the outstanding final, stage playoff matches were hardly close.

During Stage 2 it looked like the New Yorkers could recover from their blunder, but ended up two back-to-back losses against Atlanta Reign. Both by Elo and eye-test, the stage playoffs became a two-horse race between San Francisco and Vancouver once more. As the graph above shows, the six other teams in stage 2 playoffs cumulatively had a mere 20% combined chance to win the stage 2 title given the strength of Titans and Shock.

Stage 3, however, promises so much more.  Looking at the graph, the curve shows a much tighter distribution of win percentage, and hence a much more competitive tournament. 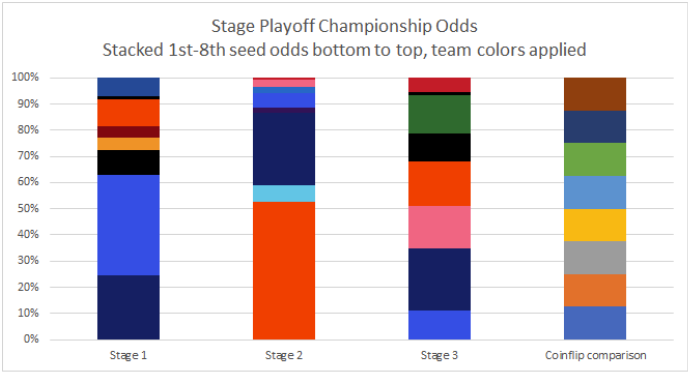 In fact, there are six teams with a higher than 10% chance to win the Stage 3 title. Which teams you ask? Specifically, using these Elo ratings in a Monte Carlo simulation currently suggests the following probabilities for next weekend. 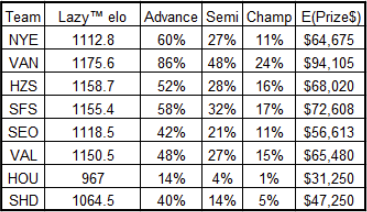 Team ratings are quite competitive, with the top two seeds inheriting the well-earned luxury of an easier first-round opponent. Unless the Houston Outlaws and the Shanghai Dragons manage an upset, the semi-finals and finals all appear to be virtual coin flips.  The entire extended weekend promises to deliver concentrated top tier Overwatch.

Compared to the past stage playoffs, only one of 14 Stage 1 and 2 playoff matches went the distance to the tie-breaker map and it was, of course, the most memorable one between Shock and Titans. Stage 3 is ready to deliver more. Given this distribution of ratings, it is more likely than not that at least two series go the full distance.

With the reported 2-2-2 lock coming on the horizon, GOATS and its stage 3 meta evolution will go out with a bang. The hierarchy of teams that we’ve tried to evaluate over the season will once more be soft reset and we’ll have to almost start from scratch. Stories of redemption, grit and self-discovery will come to a head next weekend. Both the human element and the numbers point towards the GOATS meta going out with a bang.

Want to estimate your own stage playoff probabilities? Make a copy of the following document here and click under File > Make a copy. You may either change the rating of each respective team or adjust their win rates in the tournament tree (light blue cells). Share your Stage 3 championship odds with us in the comment section!