The latest Magic: The Gathering card set, Midnight Hunt, is here. The new set is already available on table top and digital. It features werewolves and dives back into the popular Innistrad plane. There are some interesting new mechanics here and lots of fun lore to read up on. We caught up Mike Turian, the Principal Product Designer at developer Wizards of the Coast, to discuss the new set and to try and find out what’s coming next.

With the addition of werewolves comes a new night time mechanic. Once a certain number of turns have passed without spells being activated, it will turn to night. Werewolf cards become stronger here and some have new abilities. Humans can turn the game back into daytime by playing spell cards, returning werewolves to their original state. This is a new mechanic which hasn’t been seen in Magic: The Gathering before, so we asked Turian to give us some insight into this mechanic.

Turian says that Midnight Hunt “has a great mix of mechanics to suit its gothic horror theme.” It is Halloween season afterall. Turian says this new “Daybound/Nightbound” card feature “leads to interesting gameplay decisions where players might want to sandbag spells to either unleash their Werewolf army or cast two spells to transform Werewolves back into human form.”

Once these new effects are in play, they take action immediately, transforming the entire board. That’s not the only new mechanic either. There’s Coven, which as Turian explains “adds a layer of intricacy to deckbuilding as players have to work to fit in creatures with a range of different powers.” Finally, there’s the Disturb mechanic, which “is cool because it allows each card to tell a story: how they were before death and what their spirit looks like after death.”

Bringing back the old

Midnight Hunt isn’t all about new mechanics. Innistrad is a fan favourite plane. The team at Wizards of the Coast wanted to add a few more iconic things to Midnight Hunt, so an old favorite mechanic, “Flashback,” makes a return to this card set. Flashback can be used to return a card from the graveyard.

Turian says it’s good to bring back old mechanics as “Magic can become quite a complex game to keep up with. Having returning mechanics lends a sense of familiarity so players can ease into Midnight Hunt and feel at home straight away.” Turian adds that Flashback is such “an awesome and incredibly deep mechanic [that is] so iconic on the plane of Innistrad.”

There have been some Easter eggs floating around the Magic: The Gathering community as of late. In the Modern Horizons expansion set, a card was released called Wrenn and Six. This is a legendary Planeswalker. In the new set, Midnight Hunt, Wrenn makes a reappearance, only this time it’s Wrenn and Seven. Turian says this new Wrenn and Seven card is his favourite in the new set. “It’s hard to go past Wrenn and Seven. A planeswalking spirit that attaches itself to a new tree on every plane? Sign me up!” 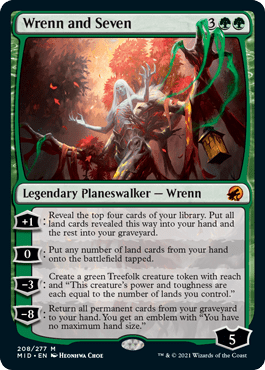 Wrenn and Seven Mythic Planeswalker card. | Image provided by Wizards of the Coast

Midnight Hunt is centered around either a werewolf or a human deck. Turian says his particular favorites are the werewolves, saying “it’s fun to root for an underdog […] werewolves hands down.” Even so, Turian says it’s hard to choose between werewolves or vampires, saying it’s the “classic Twilight dilemma.” He says right now it would be werewolves, but we’ll be sure to check in with him when the vampires are released. That next expansion, Crimson Vow, is set to launch in November.

Turian says that one of the awesome things about Magic “is how you can combine different cards to create all sorts of powerful interactions. For creature types like Werewolves and Vampires, they have a lot of overlap in their color pairs. You will find Werewolves primarily in red and green while Vampires will be found in red and black. With that overlap, you can put together a fearsome Werewolf and Vampire deck that will feature some of the best creatures in Midnight Hunt!”

He adds that he can’t reveal much about the next Magic: The Gathering expansion beyond Midnight Hunt, only that it will remain on the Innistrad plane. He leaves us with a little teaser though. “You can be sure that your Werewolf and Vampire deck will only grow stronger with even more Werewolves and Vampires coming out soon!”