G2 coach GrabbZ: "Perkz is the most driven person I’ve worked with in esports, by far"

GrabbZ spoke to Upcomer at MSI about his unique angle on coaching.

No two coaching roles in professional League of Legends are the same. It’s a regularly discussed debate about what a League coach must provide for their team to be successful is a regular debate among analysts, but that debate often doesn’t involve coaches themselves.

Many believe coaches should be former pros, while others declare just being high elo is enough. But of course, some coaches are not skilled at the game at all themselves.

Near the end of the group stage, G2 coach Fabian "GrabbZ" Lohmann spoke with Upcomer about what made G2 a unique team to coach, how he had to shift his role through the off-season’s roster changes, and how being low elo is a non-factor when it comes to preparing a team. 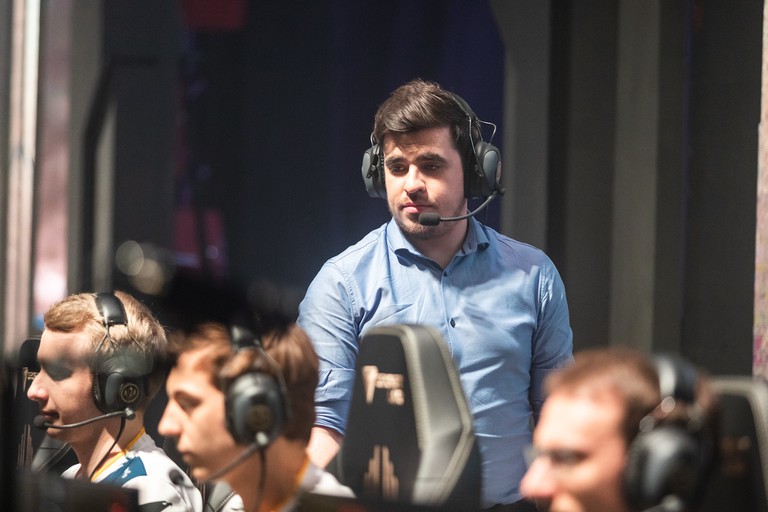 You are not a high elo player, but your teams have been very dominant. Do you believe rank should play a factor in coaching?

GrabZ: So the role of the coach is that there is none. There is nothing that you can nail a coach down on. A good coach will look at his team and see what his team needs. And, for an example, looking at me in my teams, on Roccat I had a bigger teacher role than I need to have on G2. There was this misconception for example that began last year with [Luka "Perkz" Perković] that he has to teach macro to the team. Which is bad, because though Perkz does have enough knowledge about the macro, it was my role to be the mediator and make sure the atmosphere is good. And especially since everybody’s emotional, the conversations need to lead to something. Every time we say something, we come to a conclusion, there’s something we agree on.

But sure, I guess I could take time, like in a [Bok "Reapered" Han-gyu] role coaching [Eric “Licorice” Ritchie] to be a better top laner, I could watch [Martin "Wunder" Hansen’s] top lane VODs. But that means I spend 38 hours watching something to give him one point. So that means there is inefficiency. I, as a bad player, can’t teach him some things. And even if I could, it wouldn’t be efficient. So instead I look at map movements, look at communication, how do we talk with each other, how do we practice? Does everybody feel good? That’s really important with this team. Everybody knows we are kind of trolly, but that only works if the atmosphere is right. It means we need to target it really early if someone feels left out or feels bad. There needs to be an open discussion.

Other coaches are maybe not good at that, not good at managing. Maybe they’re better at macro, or better at laning, or jungling. That’s something that happens in every sport. If you’re a soccer fan, you have a guy like Pep Guardiola who is insanely versatile in terms of tactics and plays this high brain football style basically. And then you have a guy like Jurgen Klopp who admittedly gets in to the heavy metal football a bit too much, but there’s more emotion in it. He’s more of the motivation for the team and has background staff for the tactics more than Guardiola would. So there are many narratives and parallels for League as well.

For the fans that criticize a coach for drafting or whatever, the coach doesn’t do everything. Just finding your own role as a coach to what you can bring to the team to make them better. And if that’s swallowing your ego and typing out after every loss, “My draft was bad, it’s my fault,” then that’s part of the team. If the community complains about me, [rather than the players] then that’s something I provide to the team.

And you were of course the coach for G2 last year which is quite a different roster to this year. So how does your role change with the new dynamic?

With this roster, the teacher role got pushed back even more comparatively. And became more about mediating, making sure everybody is happy and that we agree to something because we are five players who are insane in the game and very smart about the game. But that doesn’t mean they agree all the time. It’s important that we find balance and find the objective conclusions and not just say “Play x here, the champ could be good.” Then we try it out and lose the game, of course the first reaction you have is, “maybe it’s not so good.” But then it’s my role to say that actually the reason we lost the game was this, this, and this. No matter the champ it’d be the same conclusion, so let’s try it again.

I also filter out ideas. For example, we played Pyke already so I can talk about it, but in the beginning, back in EU, we already had that idea. Wunder, I think, said that Pyke was playable. But I said no because there was no need to. There was no EU team who actually played Jayce that well that we’d have to punish against that threat. Coming into MSI, we’re up against [Kim "Khan" Dong-ha] and [Kang "TheShy" Seung-lok]. So of course our readiness has to be higher for Jayce, so therefore, it’s worth putting more time into. So time management is something I have to do more now.

Also, honestly it’s harder now to make them do their job because they’re so trolly and like to have fun all the time that it gets really exhausting. At some point they have to do the athlete part of the job as well. That they’re on time, that they listen to each other, that they practice carefully and efficiently. So that’s a bigger part than before. Because now with the inception of [Rasmus "Caps" Winther] and [Mihael "Mikyx" Mehle] you have two more trolls than before because [Petter "Hjarnan" Freyschuss] and [Kim "Wadid" Bae-in] were a bit calmer. But now you just have five people jumping and running around all the time.

I can imagine. So how does that differ from a manager role? Or do you feel like those are just terms thrown around and each team kind of decides how to fill and name their positions?

I mean the manager at least in this case is more about press timings, certain sponsor engagements, working the fan meet, making sure we get all proper engagements through social media. Everything that touches the game should be my job. I kind of manage that as well, basically. So there might be a misconception but for example, our manager has a more friendly role. He gets to interact with the players in a different way than I do. And that’s a conscious thing because I think it’s important that, sure I’m friends with them as well, but there is still a barrier, I’m still the coach.

That means if I change my tone, they know, “Okay, he’s serious now, we should do what he is saying.” Whereas the manager can be a bit more chit chatty, how’s the daily life, how’s the family doing. That type of thing. But again, another coach might not be good at other things and uses a manager type there instead. 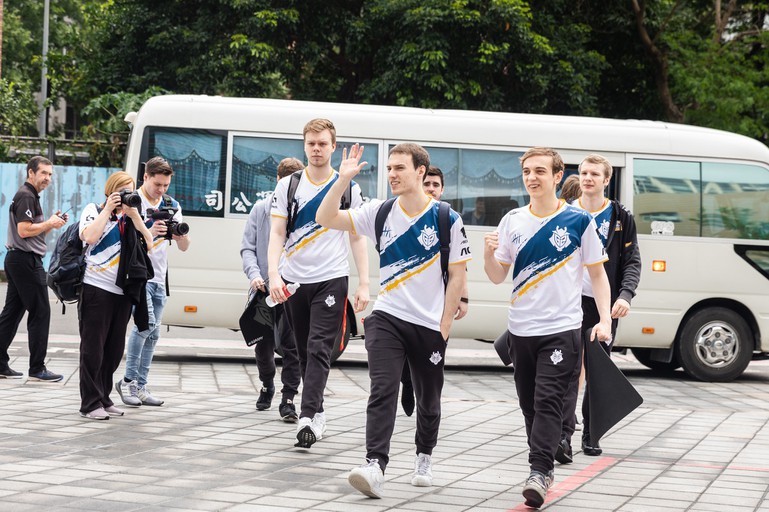 So your teams always seem to be incredibly clutch. Is this something you’re specifically curating, or do you find yourself somewhat lucky that these rosters have that?

It lowkey goes both ways because I provide a good atmosphere overall, but then in game being clutch highly depends on Perkz. Not just on him, because again I am blessed with five players who are very experienced and very good at the game and believe in themselves. So it’s easier.

But also, Perkz is the most driven person I’ve worked with in esports by far. If you have somebody like this in the game who will tell you what to do because he believes in himself and knows he is good, then the game is easy to play because he doesn’t panic. And even in the few cases where he does, because even he sometimes doesn’t know what to do, we have a guy like Jankos, Caps, Wunder, or Mikyx to come in. So even if someone shuts down, we have four others surrounding him to help out.

But mainly last season, I would contribute this to Perkz. There’s this winner mentality which you have to have in the field - or in League, on the Rift - and now it’s more balanced because even though Caps always is looked at as this funny guy who’s always happy, he always has a serious tone to himself. So this also comes into play in the games when they’re tight that he tells the team what to do, he knows how he should behave. So now we have a good system of bouncing ideas in the game.

Do you think any of that has to do with Europe, the fans, and their history?

That’s really interesting because one thing that confused me a lot was last year at Worlds when [Jakob "YamatoCannon" Mebdi] did his famous speech. I mean he is smart, he’s charismatic, so he brings that out, but that didn’t faze us at all. Like we didn’t care. We were already 2-1 in our group stage. We were doing our own thing. Right? So it was like, yeah sure he is doing it for the fans, to an extent, and it sounds nice, right?

But then suddenly we start hearing people from Cloud9 saying, “Oh yeah this actually motivated us and we believed in ourselves.” And nothing against Reapered right, but how shitty is the coaching staff if you need somebody from outside your org to tell you to play your own stuff. Like I was really confused there that a team, a professional team, actually got picked up by that. Like if it comes internally, sure maybe, because your player had a good speech or something.

But outside? A different coach actually motivates you that hard? I mean sure Yamato is charismatic, but… Maybe it’s an NA thing, because they’re risk averse compared to EU, and that shows in game as well. And I mean we could talk about the whole flame mentality in EU that’s a bit more harsh, a bit more direct. That could also play into it, but of course I’m not a sociologist.

So you were talking about Perkz earlier, who came up with the idea with him going to bot?

Hahaha, no I mean he always played AD as his second role, and there were clear conditions in which he would want to go bot and he would be ready for it. Those conditions were met in offseason by G2, and therefore for him it was easy to say, “For this team, I can go bot.” There are certain things in the team where if they weren’t present, he wouldn’t do it. But it was just a lucky coincidence and good roster management by G2.