"The tiger cannot change its stripes" is an old adage, but appears especially true for Amit Raizada, co-founder of Vision Venture Partners and major investor into ﻿Echo Fox﻿, the brainchild of former Lakers great Rick Fox.

Raizada, who recently came under fire for threatening Fox's family and hurling racial slurs at former Echo Fox CEO and co-chairman of the H1Z1 Pro League Jace Hall, has once again been accused of similar intimidation practices, this time by another former business partner. These allegations, however, reveal that Raizada’s racist and belligerent behavior is nothing new, and that it has been ongoing since the investor began a hobby of spending heaps of cash per night at Las Vegas clubs, often totaling several hundred thousand dollars over a weekend.

Michael Gortenburg, whose connection to Raizada spans several former and current business ventures along with a $6.1 million dollar judgement case against Raizada, describes him as a former trusted friend. Gortenburg described years of egregious behavior by Raizada that was systemic and habitual.

“What's happened with Rick Fox and Jace Hall is not fresh or new,” Gortenburg told Upcomer. “This is repetitive and old. Everything you've seen here has happened before.”

According to Gortenburg, Raizada has a history of sending anti-semitic texts and racial slurs, as reported by Upcomer a few days ago, as well as threatening staff and associates—including Gortenburg’s son.

“He has threatened people over and over and over again. This is not news. Plus the racial slurs are not new, I will under oath attest to that,” Gortenburg asserts. “There’s more. Anti-semitic, homophobic, misogynistic, there's a whole gamut of stuff. He once threatened [former partner] Scott Asner saying, 'I going [sic] to destroy you and everything you build. Go fuck yourself. Grow done balls [sic] and come to Florida. Let's see what happens to those teeth. Hiding like a bitch.'” 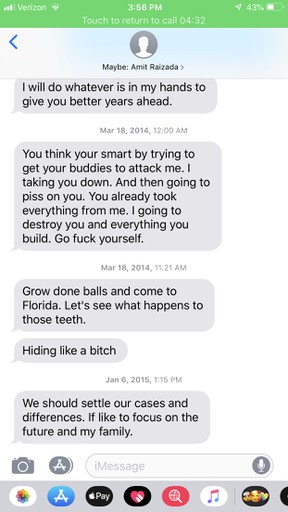 On July 8, 2002, Raizada went into a US Bank in Olathe, Kansas to deposit funds from Cellular 4 Less. He already had one teller working on his deposit when he gave another teller about $2,000 and asked her to change the money into large bills. When the teller asked Raizada for his ID and Social Security card, an incident occurred. According to bank personnel, Raizada called the tellers "fucking whores" and "fucking bitches." He allegedly spit on the bank supervisor and punched her in the chest because he thought he was being racially profiled.

Because of the incident, Raizada was arrested and charged with two counts of battery and one count of disorderly conduct. Instead of doing any jail time, he agreed to a 12-month diversion program and was mandated to participate in an anger-management class. One of the tellers who decided to sue Raizada received a settlement.

More than violence, Raizada’s history with slurs and epithets is a much longer read.

Gortenburg believes with certainty that Raizada’s statements aren’t a byproduct of some style of speech, but that they accurately reflect how Raizada feels.

One only has to search the name Amit Raizada to deduce that the 42-year old India native has a checkered past and a history of mean-spirited and manipulative behavior. An article from The Pitch goes into detail about his many dishonest business dealings and in particular the handling of a postnuptial agreement with his now former wife, Amanda.

The article describes a series of events where Amit Raizada manipulated Amanda Raizada into signing a document that transferred 70 percent of her assets listed in her financial portfolio into trusts, now in the names of their children and Amit Raizada-owned businesses, where she was shut out and to no longer have access to the money.

“Ms. Raizada’s 22 percent ownership interest in the Raizada Group, LP, rather than providing $16 million in assets, resulted in a projected $237,000 tax liability for her in 2013,” her attorneys, told The Pitch. “Mr. Raizada … not only directly undermined the value of the party’s assets, but actually divested Ms. Raizada of the vast majority of her wealth, leaving her with hundreds of thousands of dollars in potential tax liabilities every year for the rest of her life.”

Raizada made his money at the beginning of the online payday loan boom, where by the time he exited the business his estate was worth approximately $90 million.

After exiting the payday loan business and partnering up with Gortenburg in various enterprises, Raizada was sued by the holding companies that Michael Gortenburg and Scott Asner have stake in. He was sued for draining business accounts of large sums of money and siphoning it to other companies he controlled. In addition, Raizada was sued in the same lawsuit for compiling immense tabs at clubs and bars, stating that he would spend upwards of $150,000 in a single weekend, claiming it as a normal business expense. Shown below is a photograph of Raizada at a club from World Red Eye, labeled on the site as "Lisa & Amit Raizada, Elaine Gregory, & Chris Paciello." 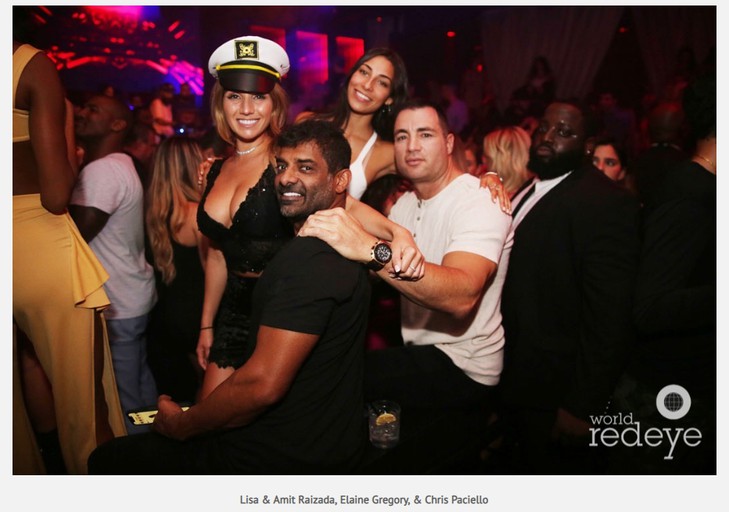 And that wasn’t all. Raizada would often to brag or show off his conquests in Las Vegas by shipping back items from his partying binges.

“He used to bring the bottles. There are bottles of champagne that are like five feet tall. I’ve seen the empty bottles because he shipped them back, and they're like $70,000 a bottle,” Gortenburg said.

All of this persuaded the jury to award the holding companies $611,000 in damages. However, in a very unusual move, the jury also awarded $5.4 million in punitive damages—almost nine times the awarded amount.

“We're involved in our fourth lawsuit with him, suing him,” Gortenburg said. “He's settled some others, and in some, he got his butt kicked. They awarded $5 million-plus in punitive damages.”

Raizada has a long history of being involved in litigation on both sides of the courtroom. He’s sued charter aircraft companies, Mclaren Motor Car and others, while having been sued by multiple companies himself.

Gortenburg has not only witnessed the type of behavior Raizada exudes, but has also been a victim himself, which is the reason he has come forward now.

“This is not a vengeance thing for me personally at all,” Gortenburg explained. “It's more of a ‘repair the world’ type of thing, and to give people the truth about what's going on.”