Supplied by Wizards of the Coast The Brothers' War key art.

Magic: The Gathering (MTG) Arena is one of the best ways to experience the MTG card game. It’s digital so you can take your collection with you anywhere. If you’re coming from another card game, looking to start your MTG journey, or you’re transitioning to online play, we’ve got some top tips for you. There’s also come codes below for sets you may have missed out on as well as an exclusive preview of the newest Brother’s War card set.

When it comes to building decks in Magic: The Gathering there are a few things to consider. Most trading card games will have different deck types. For example, The Pokémon Trading card game uses Pokémon types (ie. grass, fire, fairy etc.). If you’re a Shadowverse or Hearthstone player, you’ll be familiar with “classes”. Magic: The Gathering uses colors: red, blue, green, white, black. These are more akin to The Pokémon Trading card game as each card could be one or two colors.

If you’re new to the game, then you’ll probably want to start off with a single color type. Dual color decks, while more powerful, are understandably more difficult to master. New players are encouraged to try the MTG Arena tutorial before jumping into more complicated matches. The tutorials will start you with a single deck color and will show you various mechanics and some basic strategies. Once you’ve mastered this then you can go to harder and PvP (player vs. player) matches. For these, you’ll want a stronger deck than the standard tutorials.

Having a stronger deck doesn’t necessarily mean crafting a deck from scratch. There are multiple ways to get powerful decks without gaming to build them. The first is precon (short for preconstructed) decks. You can purchase these from the MTG Arena store, or buy the physical card decks too. Sometimes these can be expensive, but you’ll be given all the cards you need for the deck. Another way is importing decks from other players. You can find these on places like MTG Pro or MTG Zone. These are full of fan made decks. Whilst you can import the deck code, you might need to craft some of the cards in order to complete the deck. This can be expensive; both physical world money and in-game currency.

Lots of players however love the construct their own decks. If you’ve settled on wanting to build a deck for yourself, there are a few things to consider. The first is knowing what type of strategy you would like to play. Strategies correspond to what’s called “archetypes”. This is common across most card games, and there are three main archetypes:

There are also some sub-archetypes such as combo or tempo. A combo deck which might be a slight combination of the above. For example you might have a Midrange Aggro deck which focuses winning early in the game, but is also really good in the midstage of a match. Whereas a tempo deck focuses on aggression but over time. Archetypes suit different players’ personalities and styles. Once you have your chosen archetype, the color might be dictated for you. For example, white/red decks are usually Aggro, and any Control decks tend to be base blue. MTG decks can also be more than two colors, but usually not more than three. The more colors, the harder the deck is play, but usually these are very powerful.

Figuring out the color for your deck can be tough. Magic: The Gathering is very unique in that each color deck combination has a name. There are 26 different deck color combinations in addition to the original five single color decks. This makes for a total of 31 different colored decks. Each of the combo decks also have cool names:

Once you’ve figured out the archetype, and you have your set color it’s time to build out your deck. There are various similar decks that are based current card rotations and meta. In October 2022 for example, the meta decks with the highest win rates according to MTG Pro are Esper Aggro, Gruul Aggro, Mono Black Control, and Selesnya Aggro. You can see Aggro decks feature heavily here as they are hard to counter. Most of these decks are also Tier 1 decks which mean they are relatively expensive to buy or make. You can also take a look at the winning decks from the Magic World Championships for some inspiration.

Mana curve and balancing your deck

If you’re going for one of these decks, or even a slight combination, one of the most important things to remember is to ensure you have the correct mana curve. In MTG, cards cost mana to play. If you have too many creature or spell cards and not enough mana generating cards, you won’t actually be able to play any of your powerful cards. Aggro decks focus on quickly defeating the opponent and thus have a lot of low-cost cards in the deck. But in order to play lots of these low-cost cards at once, you’ll need to have enough mana.

After you’ve calculated or roughly figured out the mana you need for your desired deck, you need to make sure you have the right mana colors. Decks can be multi-colored, and so are some cards. In order to play these, you’ll need the right amount of each type of mana. Make sure when you’re building your deck to add enough mana generating cards of the right mana needed. This means you’ll need to make sure you get the spell to creature to land card ratio correct. Land cards are basic mana cards and are usually one mana each. A MTG deck is 60 cards. Thus it’s a good idea to start with 35 spells, or creature cards and 25 lands cards.

Try out your deck several times against the MTG AI before jumping into a PvP match. You’ll be able to adjust the card ratio and tweak the deck as needed.

If you want to see a good tutorial on deck building, check out the video by MTGNerdGirl. She specifically focuses on the latest set Dominaria United.

I mentioned above that the deck you craft will depend on the current set and meta. Every few months, Wizards of the Coast releases a new MTG set for both tabletop and Arena. With new sets come new cards, but also new strategies, and mechanics. This means the decks that are competitive are constantly changing. It also means that some decks that are built become obsolete as they are either too weak or rotated out of the current meta set allowed.

MTG’s newest upcoming set is “The Brothers’ War“. It’s releasing this month and brings a suite of new mechanics. These will change the way players play the game and how decks are built. You can read more about these mechanics on the MTG website.

A new prototype mechanic is coming to the game. This will allow players to cast cards with less mana for a reduced effect. This will be particular useful for Aggro players. It will also allow them to hold their game should the match go beyond their low-cost, quick aggressive attacks, and into a longer battle. There’s also a new token type: power stones, and then there’s transformers. These powerful cards will have multiple effects for players to choose from. 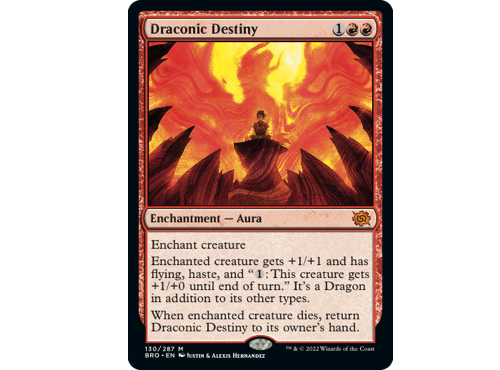 This is an enchantment card that could be added to another creature to make them more powerful. It’s a low cost card and will go well with the current successful Gruul Aggro deck. It will be a good contender against the arguably more successful Esper Aggro decks that are currently on top of the meta. Some other cards for Brothers’ War have already been released. Check them out on the website and get excited for the next MTG card set.

Jump in and start building your deck

Don’t sit around and wait for Brothers’ War to come out to jump into MTG Arena. Sign up for an account if you don’t have one and start playing. If you’re new to the game, or haven’t logged in for a while, we have some deck codes to get you started. Enter these under “redeem code” for three packs per code:

These codes are some from of the latest MTG sets including Streets of New Capenna, Alchemy Horizon, and more. Let us know what deck types you decide to build.