The "food buff" is real

Provided by @Bunberly Getting paid to make great food for a week came with it's own set of benefits.

These days, the average League of Legends pro player has to do more than just hone their in-game skills to be successful, since the margins between them and their rivals are so slim. Now more than ever, organizations are making strides to prioritize both mental and physical well-being because they have the resources to measure how those factors impact their game.

The League of Legends European Championship’s MAD Lions, for example, were vocal when burnout struck after their top-four finish at the 2021 Mid-Season Invitational. To get their minds right, they employed a more relaxed practice schedule during the next split back. Orgs like Rogue, meanwhile, focused more on the body by employing Michelin-trained chef Anton “Foxy1” Mihailov to make sure players are properly fed and energized.

MAD didn’t qualify for MSI because of progressive player management policies, but without that approach, they may not have been able to bounce back from a slump and win a second-consecutive LEC title. We’ve seen time and time again how the best teams make it as easy as possible for their players to manage their physical well-being in spite of hectic schedules (Cloud9 has been encouraging players to attend team exercise sessions for a while now), and there’s actually a reason for that.

“In the end, it’s probably more of the practice, the coaching, playing the game itself, that makes you better or worse as a pro,” said Dr. Jordan “Dr. Respawn” Tsai, a physical therapist with experience working with esports teams and individual players on incorporating and maintaining healthy habits into their day-to-day. “But I do think that if your physical health isn’t there– and that includes diet and exercise– it’s going to be much harder for you to actually achieve the potential that you might have.”

But how much can eating better really help? And food can help League of Legends players improve, could it help me?

Food of the pro League of Legends gamer diet

Like many other hopelessly online twenty-somethings, working from home during the COVID-19 pandemic forced me to confront a staggering realization about my daily routine. I’ve always practiced sporadic and unhealthy eating habits throughout the day, and a few months ago it started affecting my work for the worse. I was feeling tired throughout the day, drained of most of my creative energy and generally slower, both mentally and physically.

In an effort to improve my habits and understand what it takes for a League of Legends player to adjust their diet, I asked Foxy1 how to eat like a professional gamer.

Foxy1 said figuring that plan out wasn’t easy, at first. Despite starting his career in the back of a 2-star restaurant in Amsterdam, when Rogue’s general manager and his brother, Tomislov “flyy” Mihailov asked if he wanted to cook for the team in 2019, he learned quickly that cooking for gamers was a whole other world.

“The first split was a bit harder because it was something new to them. They were all used to eating whatever they wanted,” Foxy1 said. “But after that, most of them got used to certain products and certain stuff that they need to eat in order to feel better and perform better.”

Rather than pressure players to entirely overhaul their dieting and meal habits, Foxy1 encouraged them to introduce gradual changes to their lifestyles. For example, instead of telling players to cut everything they enjoy eating from their diets, he suggests they incorporate an easy-to-make, healthier choice into their day — like oatmeal with berries for breakfast. That way, players don’t get discouraged by trying to make too many drastic changes at once.

That philosophy carried over to the plan Foxy1 made for me. After I received a copy of his weekly grocery list for the team, he’d construct a menu that I would follow as a guideline. That meant I was essentially shadowing what the team would eat that week give or take a few modifications.

The obvious extra challenge for me was that as a regular person who isn’t getting paid a salary to play League of Legends, I’d have to be my own personal chef. That meant making time to cook whatever was on the menu at a good enough time to line up with when I’d actually be eating it. And to make the experiment more interesting, I didn’t look up any recipes or guides, instead relying only on my own cooking knowledge and whatever tips he’d already given me.

However, a few months of clocking into my own living room every day fostered an impulsive eating schedule that revolved around how I was feeling rather than what I needed to get done in a given day. I wasn’t giving my body much to get through the day. So, my goal, by the end of it all, was to eat at more consistent times and get through my workdays with enough energy to complete tasks without them spilling over into the evening. Anything more than that would be a bonus.

It took a while to find all of the food on my League of Legends pro list (good luck finding sudjuk in Richmond), but once I fully stocked my fridge, I tried to set myself up to actually cook everything throughout the week.

First, I set up all of my breakfasts the night before so I didn’t have to do much extra thinking in the morning. Then, after remembering I don’t have five other hungry gamers to help me finish everything, I prioritized meals that I surely wouldn’t finish in one sitting and got ready to have plenty of leftovers.

Going into the experiment, my staple breakfast became overnight oats with berries because it’s easy to prepare. For those unfamiliar with the dish, it’s basically a method of making oatmeal by soaking oats overnight in a refrigerated container with your choice of liquid and other add-ons so they’re ready to eat in the morning. I always used a mix of fruits, but made sure to add blueberries, as Foxy1 said they help focus and performance.

“They both help with cognitive abilities, but it’s important to have them on a daily basis,” he said.

Before this, I actually hated oatmeal, but Foxy1 suggested this method because it makes the texture less sticky — and he was right. I’d add cinnamon, cocoa powder and almond milk for soaking, then toss in a mixture of whatever fruits I felt like having for the day in the morning.

I replaced my scheduled lunches with snacks I could eat if I felt hungry throughout the day. I stocked up on some of my favorite fruits, because they’re easy. If I felt like I needed something more substantial, I had chicken hotdogs to tide me over until dinner. On a few select occasions, I also made these cute zucchini boats with egg whites, cheese and soy chorizo.

Not working with a recipe was a surprisingly fulfilling process that gave me a unique chance to flex my creative muscles, especially with the more-involved dinners. Every dish I made was basically the culmination of whatever idea I had in my head of what the food was supposed to look like and years of experience absorbing cooking tips from watching my partner cook.

I went with three staple dishes for the week. The first, and probably most fun to make, was vegan “fried chicken” with oyster mushrooms, sweet potato puree and greens with roasted garlic (you know I had to flex this one on socials). After running through those, I made a simple green curry with chicken and coconut rice. 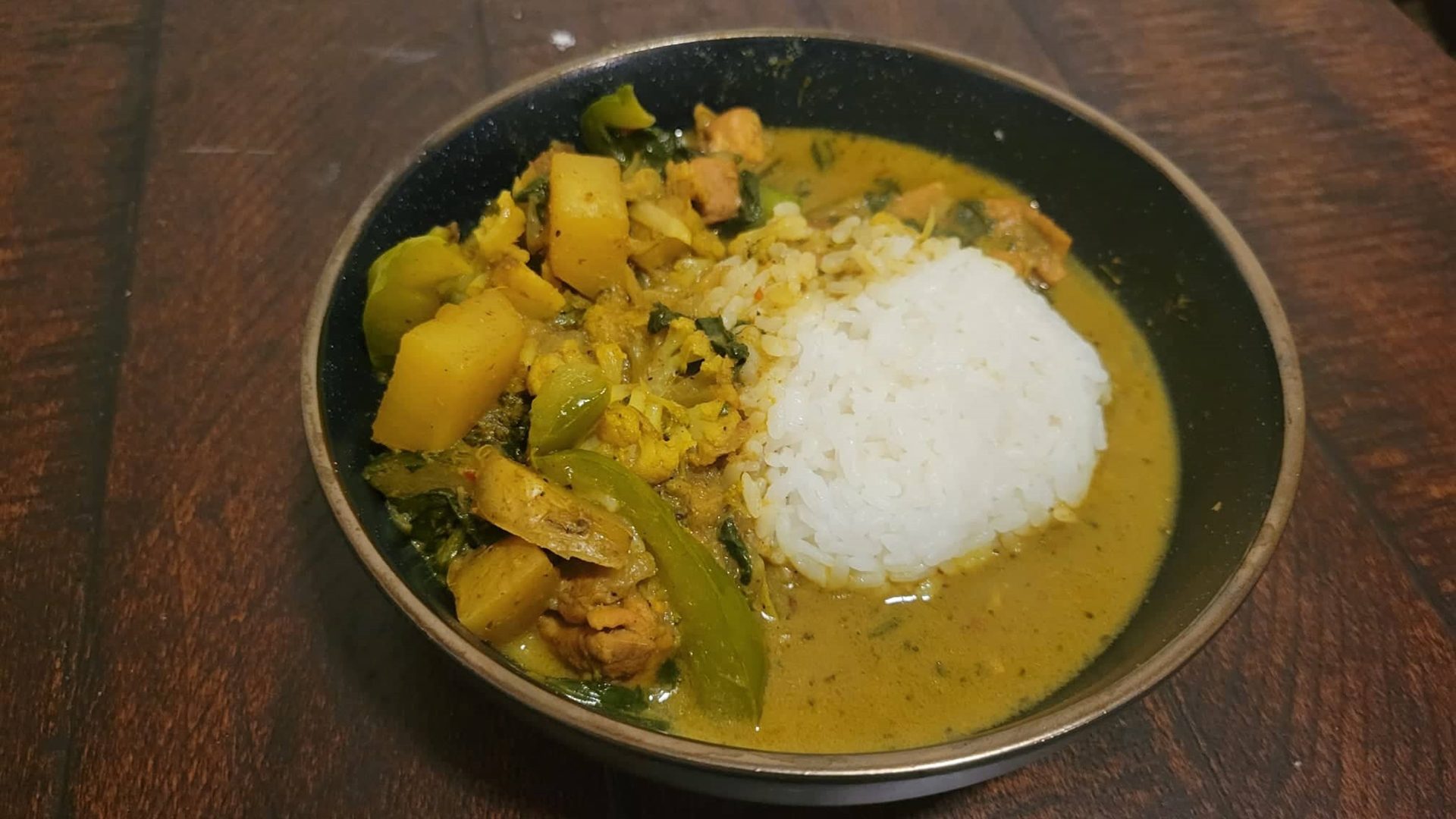 Green curry with chicken and coconut rice. | Provided by Upcomer.

With no curry left, I made a homemade lasagna with a moderately colorful salad to finish out the last two dinners of the week. This was actually my first time making lasagna and the process of layering the ingredients on top of each other like Lincoln Logs has got to be one of the most satisfying food prep experiences out there. Just be sure to double-check the lid on the parmesan you’re using to finish it with.

As for how the food affected me, my coworkers can attest to the fact that adjusting to a new “diet” was a process. I felt some initial irritability from all of the changes, but eventually, I started to feel at the top of my game.

Knocking out mundane, daily tasks that previously caused so much frustration became easy. By the third day, I found myself getting through the day without any slumps in energy. As a plus, it was also easier to ignore distractions and balance multiple things at once.

Gaining an edge through food

As it turns out, not eating frozen pizzas for dinner at 11 p.m. and making consistent, healthy food choices will typically lead to positive improvements in anything you do. That came as no surprise, but breaking out of a cycle is never easy.

I’ve ignored the advice of net-dwelling self-helpers and rise-and-grinders for years without any major issues. I don’t have any major physical health problems, I’ve always maintained an average weight for my size and my health never felt like a huge barrier in my professional life. There’s always room for improvement, but it never felt like I faced serious consequences by living, and eating, however I wanted to.

This experiment didn’t cause me to make any long-term changes, but it did accomplish its goal of getting me out of an uncharacteristic slump. It was also a reminder of the varying ways in which we can benefit from listening to our bodies.

I mean, it’s one thing for someone to say you’ll feel better after doing a certain thing. It’s a totally different thing to choose to be kind to your body and experience the benefits of doing so first-hand.

Changing my diet didn’t put me up for any promotions or anything, but I was more capable of performing my job to expectations, and sometimes going beyond them. I found it easier to tackle aspects of my job that I’d typically put off, like transcribing interviews or shooting a cold email, in a timely fashion. With less of my energy spent convincing myself to do things, and more of it spent actually doing them, suddenly I had more time in the day.

For a pro League of Legends player with three scrim blocks a day on top of solo queue, content and other obligations, every competitive edge counts; that includes setting their bodies up to perform at the highest level they can. At the end of the day, the best League of Legends players are the best because of the time they put into training their skills at the game, not because of what food they’re putting into their bodies, but it doesn’t make it any less vital to their success. A good diet isn’t the reason behind a player’s skill, but it could be the reason they’re that much better than their next best rival.