Check out our predictions and analysis for the TI10 Finals so you can plan your bets.

Dawn of the final day of TI10, and we’re down to just three teams remaining. Team Secret and Team Spirit will face each other in the Lower Bracket Final, and the winner will face the indomitable PSG.LGD in the Grand Final.

Let’s break down these matches and what we expect to happen. Vanya Kirillov, founder of alacrity.gg, uses a quantitative approach and lets a predictive model do the talking. Kenny Utama, longtime Dota 2 reporter, leverages his experience in covering the esport to come to conclusions.

Neither approach is perfect, but both will give us valuable information on what to expect. How will the final day of The International 10 shake out? 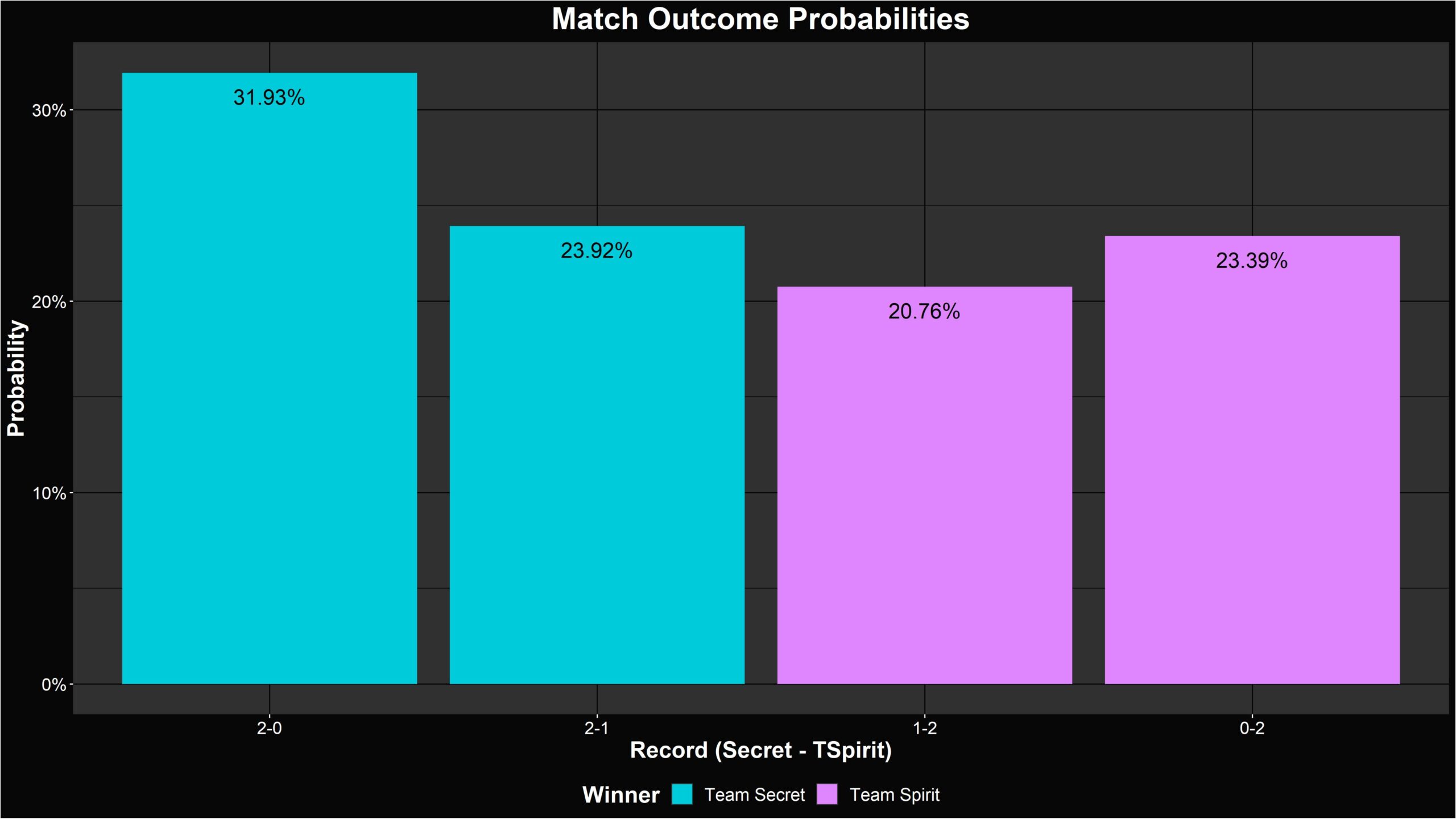 This is probably the closest I’ve been to the market all tournament. The odds place this matchup at 55/45 in Team Secret’s favor, and I’m at 56/44. I wouldn’t suggest a bet with such a close agreement, as the vig just destroys your value, but this should be a great game nonetheless.

These teams are incredibly similar on paper. Both teams maintain roughly the same margins of gold, experience, and objectives against their opponents, which effectively tracks how well each team is able to keep a lead. Both teams perform better as a team than their players do individually. Secret’s home region of Europe and Spirit’s home region of Russia have historically been similarly strong regions, so there’s no advantage there.

Both teams also have incredibly consistent and incredibly well-rounded rosters. No player on either team stands out as the make-it-or-break-it player, where a team’s performance hinges on their ability to make things happen. These squads have truly found ways to mesh well and play to their combined strengths.

Secret’s players have higher individual win rates, ranging from 65-67% compared to Spirit’s 59-64%. Both teams are undeniably above average, but Secret does get a slight advantage here.

The largest differentiating factor is simply these two teams’ history of facing each other. In the group stage of TI10, Secret took a 2-0 victory over Spirit. These two teams haven’t recently faced each other outside of that, but their players have all been around the block and run into each other often enough. Historically, Secret’s players have done better than their average when facing any of Spirit’s players, and vice versa.

None of these are massive advantages, but they do add up to give Team Secret a slight edge in this matchup. However, Team Spirit’s four-match lower bracket run has proved that they can stay level-headed with their backs against the wall, including a 2-0 win over Invictus Gaming, who had sent them to the lower bracket to begin with. 55/45 is a reasonably close matchup, and when the difference between third and second is $1.6 million, you know there’s going to be some phenomenal Dota played.
–Kirillov

There absolutely is going to be some phenomenal DOTA 2 played during this event. I also definitely give a slight edge to Team Secret, 55/45 is quite accurate to how I view it too. A lot of the analysis is right, but Secret’s 2-0 victory in the Group Stages is not going to mean much. The Team Spirit entering this Lower Bracket final is significantly better than the one we saw in Group Stages. The team has that underdog magic that one team at every International has. I do not think that they will beat Secret in the Upper Bracket Finals. While Team Spirit has done well to get this far in the tournament, the quality of DOTA between the Team Secret vs PSG.LGD series and the iG vs Team Spirit series was very different. Team Secret and PSG.LGD felt like some of the best DOTA 2 that we have seen played. In the case of iG and Team Spirit, the first game was well executed by Team Spirit, but the second was a mess on both sides. I think the way things have shaped out will be the top three we have in the end, Spirit at third, Secret at Second and LGD winning the entire tournament.

As for the Team Spirit vs Team Secret game, it will come down to experience. All of the players on Team Secret are veterans that have been through these runs before. They understand what it takes for a team to move on in these elimination situations. My vote goes to Team Secret in this situation.

We won’t know which team will have the honor of attempting to dethrone PSG.LGD until tomorrow, so we’ll discuss both possibilities to prepare you for any outcome.

PSG have been unstoppable this tournament, losing a total of two games this entire tournament for an overall record of 21-2. Do either of the potential Lower Bracket finalists have a chance against the Chinese superpower? 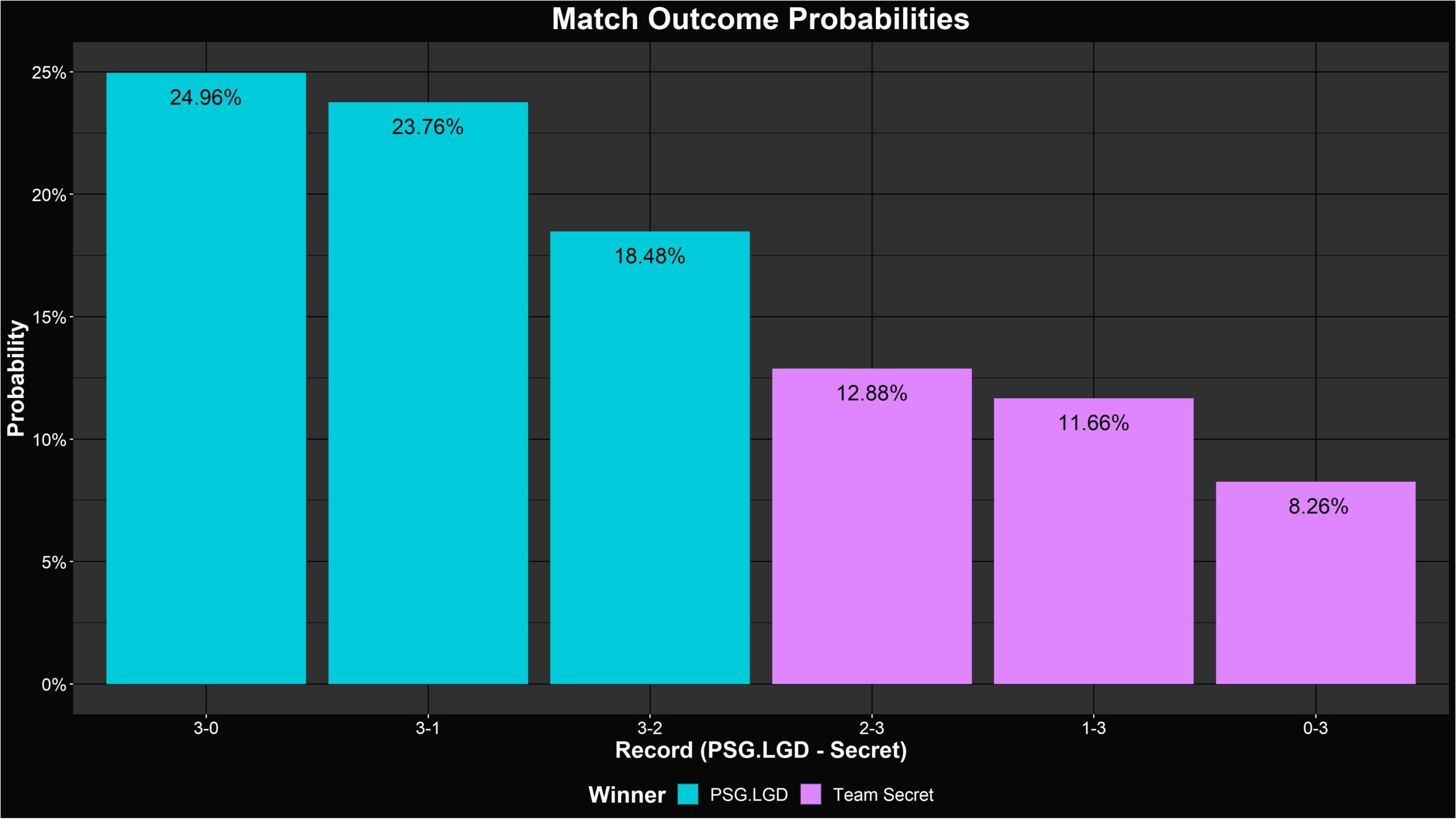 PSG.LGD continue to look unbeatable. 33% isn’t nothing, but for the Grand Final of TI, that’s a pretty hefty skew. With no odds on the market yet (since this is just a hypothetical matchup), I’ve provided the breakpoints at which either side is worth betting on.

PSG aren’t even necessarily absurdly strong in isolation. Their roster’s 64-66% individual win rates, especially in a region as strong as China, are very impressive, but Team Secret achieve slightly higher rates in almost as tough of a region. PSG tend to win by slightly higher experience leads, but similar leads in gold and objectives. Both teams have had quite consistent rosters.

One of the major points in PSG’s favor is that they’re a bit better suited to the current hero meta. Out of 186 games played at TI so far, Bane has been picked 29 times (for a 15.6% pick rate), but has won 22 of those games (for a 75.9% win rate). It has been one of the strongest support picks, and it just so happens that PSG’s support, Zhang “y`” Yiping, is a monstrous Bane player.

The other major factor, which holds the most sway, is past performance in this matchup. At the Singapore Major, PSG beat Secret 2-1. At this TI, Secret were the only team to take a game off PSG in the group stage for a 1-1 split there, but PSG beat them 2-0 in the Upper Bracket Final just today. Any time players from these two teams face each other, PSG’s squad have had consistently higher win rates than their average performance.

This matchup isn’t hopeless, but if Team Secret make it through to the Grand Final, PSG.LGD look like they’ll be in a strong position to win the Aegis.
–Kirillov

If Team Secret make it to the Grand Finals, we should be satisfied if it went the full 5 games. Team Secret are probably the second best DOTA 2 team at the moment. But to PSG.LGD? The undisputed first? It’s still a tough hill to climb. The Upper Bracket finals was a good preview of what would happen between these teams in a Grand Finals matchup. Bane absolutely will be a contested pick between both teams. Y’ is definitely one of the best Bane players in the world, but do not discount Puppey’s Bane either. He has played the hero for a long time and will be a force to be reckoned with if it’s picked.

The goal for Team Secret is to play their style in order to beat PSG.LGD. Picks like Enchantress, Windranger and Gyrocopter will be crucial to determining if Secret can beat PSG.LGD in a best of five.

Another factor to consider would be Tiny and Monkey King in the hands of either team. Those two picks are probably the most contested carries in the tournament, and how Secret decide to deal with those picks will be a large factor in determining a winner here. It would be interesting to see how tiny and monkey King do alone vs when it’s paired with a lycan in the offlane, as the Wolf’s Bite is incredibly strong on both the heroes.
–Utama 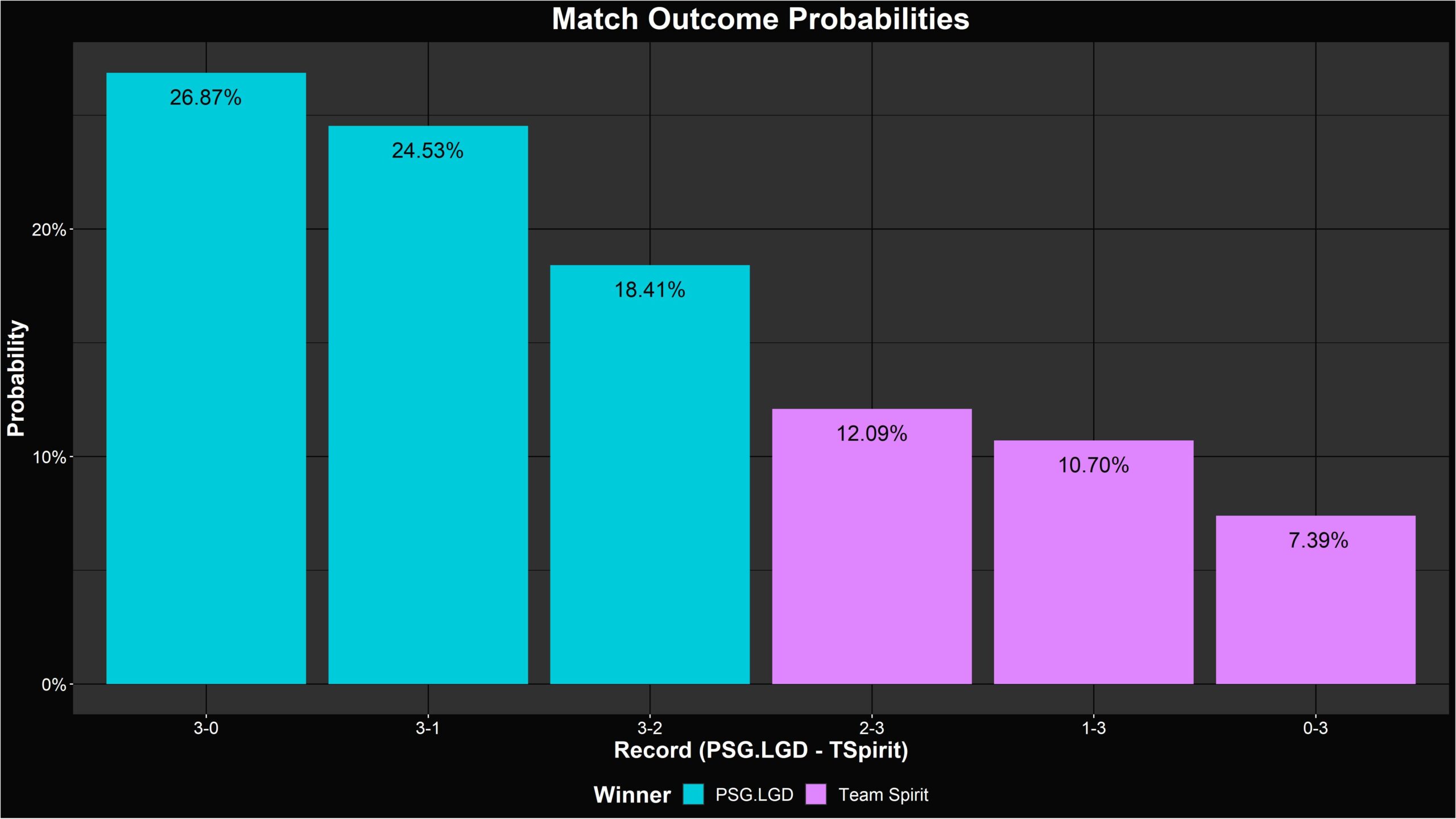 PSG are just a bit stronger in every aspect than Spirit are. Slightly higher individual win rates, slightly higher margins of victory, slightly stronger region.PSG.LGD are favored over Team Secret, and Team Spirit are just a touch weaker than Secret are. This matchup is actually a bit closer than I would have expected – Spirit are certainly in a worse position here than Secret would be, but not by a large margin.

Once again, PSG’s meta positioning helps them, though Spirit are slightly better equipped to deal with the current meta than Secret are. And once again, historic matches have swung in PSG’s favor. In the group stage of this TI, PSG beat Spirit 2-0. However, in their prior three clashes, Spirit managed to take a game in each series: 1-1 at the WePlay AniMajor, 1-2 at ESL One, and 1-3 at OGA Dota Pit Invitational. This puts PSG at a total 8-3 record against Spirit in the past six months.

8-3 is not an insurmountable difference, and if Spirit are the other Grand Finalist, they’ll be coming off of a five-match win streak in the lower bracket and can hopefully carry on that momentum. The odds are still stacked against them, and overall my model puts them at a 30% chance to take the Aegis.
–Kirillov

30% is about what I would put Team Spirit’s chances at, if not lower. To call the matchup between PSG.LGD and Team Secret an uphill battle would be an understatement. I think the only way that Spirit is able to win this matchup is to come in with a plan to cheese PSG.LGD. Pick some heroes that they dont expect, make sure Magomed “Collapse” Khalilov gets his signature Mars, get Alexander “TorontoTokyo” Khertek on an active mid hero. Sticking to what got them this far will be integral to have any chance against the best team in the world.

However, if Team Spirit were to pull off an upset, what an upset it would be. As one of the youngest teams in the tournament, to suddenly win The International 10 would be an amazing story. In the end, I am going to choose to go with PSG.LGD in a 3-0 sweep, 3-1 if I’m being optimistic. Team Spirit just aren’t on the level of PSG.LGD, and it will take them time to get there.
–Utama