Double Down: Upcomer’s League of Legends Worlds 2021 Bets for Oct. 15

Photo by Joosep Martinson/Riot Games FunPlus Phoenix on stage after victory match at the League of Legends World Championship Groups Stage on October 12, 2021

Just watching esports can be a thrilling experience, but nothing ups the stakes like putting something extra on the line. At the same time, figuring out which games to bet on and how much money to risk is no small task.

That’s where I come in. At alacrity.gg, I built a machine learning model and trained it on over 35000 professional League of Legends matches to predict each team’s probability of winning in any match. Squared up against the odds market, we can find matches that generate positive-value bets.

As the group stage of Worlds 2021 plays out, I’ll come back every day with a few highlights of interesting matches. Day four is all about Group A. Do the Western teams have any chance at a comeback? 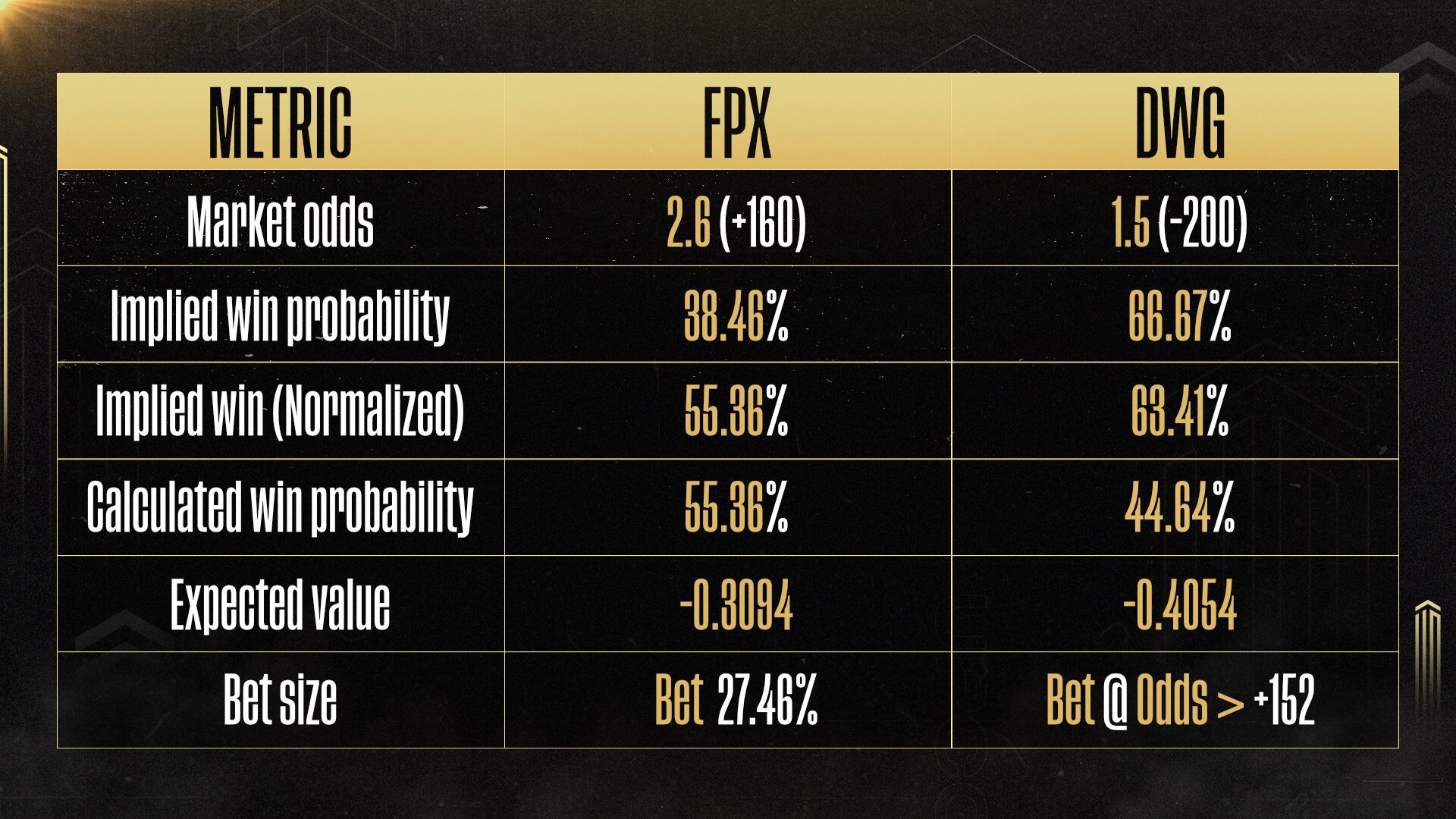 The two titans of Group A, FunPlus Phoenix and DWG KIA, battle each other in tomorrow’s first game. Currently, DK are 3-0 in the group while FPX are 2-1, with this exact matchup going in DK’s favor the first time around. The market is pricing in a 63% chance of a repeat, which my model disagrees with. I actually have FPX favored, somewhat bolstered by side selection advantage. This opens up the opportunity for a fairly high-value bet.

Historically, China has been a slightly stronger region than Korea, though there isn’t much doubt that these are the top two in the world.

In isolation, however, DK do look stronger. Their players have absurd individual win rates, many as high as 70%, which is no small feat in their region. By contrast, FPX’s 62-66% win rates, still unbelievably high, start to look average. DK also win by higher margins, though this may be a testament to their relative dominance in their region. Apart from relative newcomer Jang “Nuguri” Ha-gwon (who has still been on FPX for almost a year), both teams have had very consistent rosters, and have meshed well.

While DWG KIA may win out in small ways across various metrics, FunPlus Phoenix’s success in a somewhat tougher region should not be understated, and in the end should give them the edge to at least put up an even fight. Even on a coin flip, this would be a bet well worth making, as the payout just seems absurd for FPX. 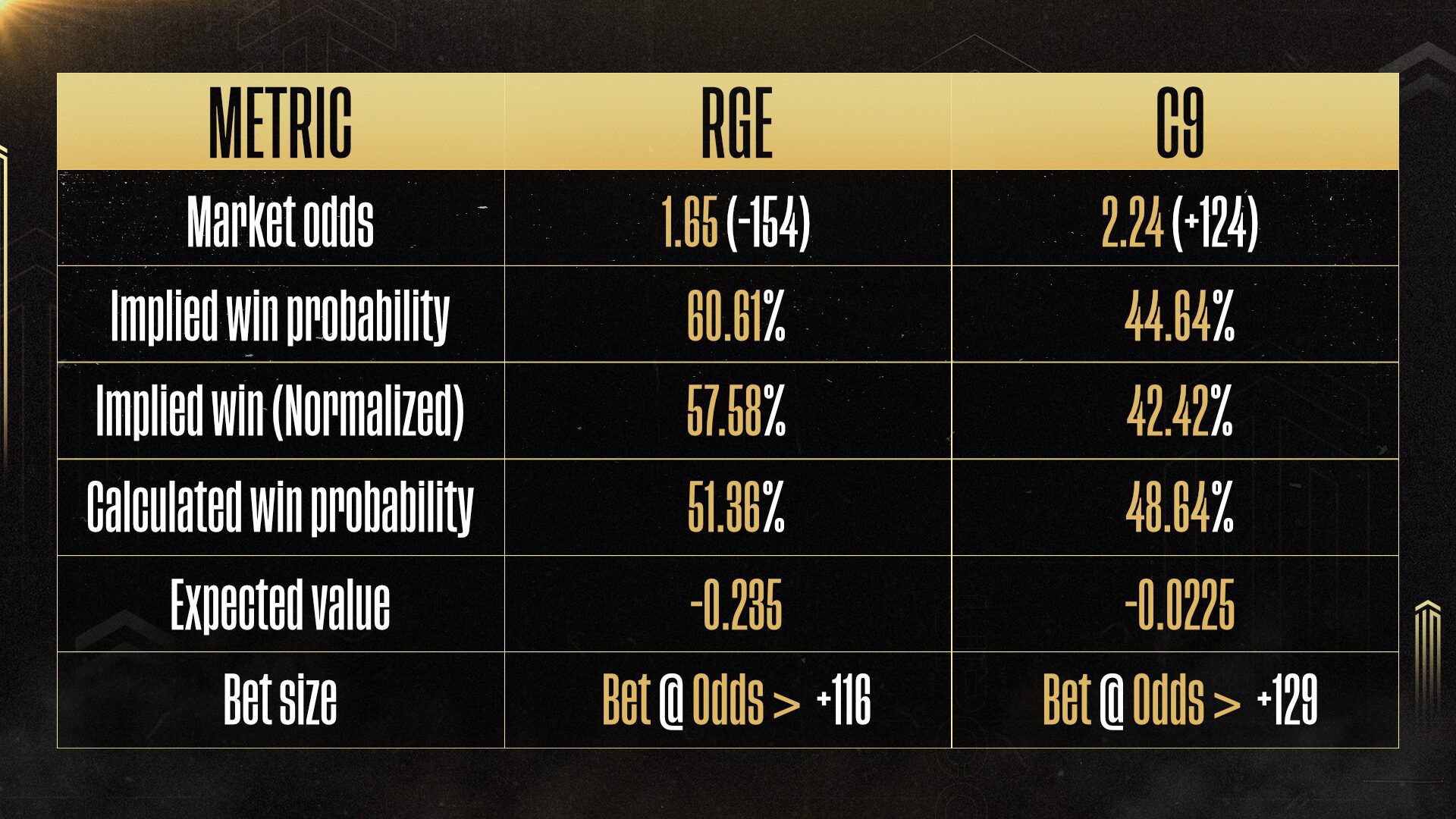 In the battle of the underdogs, we have Rogue and Cloud9. Both of these teams are looking at pretty dismal odds of making it past the group stage, but there’s always pride on the line. The odds imply a 58/42 advantage to RGE, while I’d put this at a much more even 51/49. This difference is just shy of where I’d be comfortable betting, but I wouldn’t count C9 out just yet.

Undoubtedly, Europe is a tougher geography to compete in than North America, and Rogue does have that to their advantage. However, the C9 squad have seen their fair share of foreign matches.

Individually, C9 look stronger. They’re not completely dominant, but a 57-60% win rate for their players is quite respectable, and RGE’s 53-56% is above average, but only just so. Neither team has really clicked – they don’t perform poorly, but they also haven’t found a way to become more than the sum of their parts.

C9 have a more imposing playstyle. When they win, they tend to do so with higher advantages in gold, experience, and objectives, which means they often dictate the pace of the game. If they can play on their terms, RGE will soon find themselves backed up against a wall.

Cloud9 look to be unfairly disfavored here. In many ways, their performance is more impressive, with the large asterisk that they play in an easier region. While I think that the market is overexaggerating this difference, the odds here are just a bit short of the value I’d look for to want to bet. 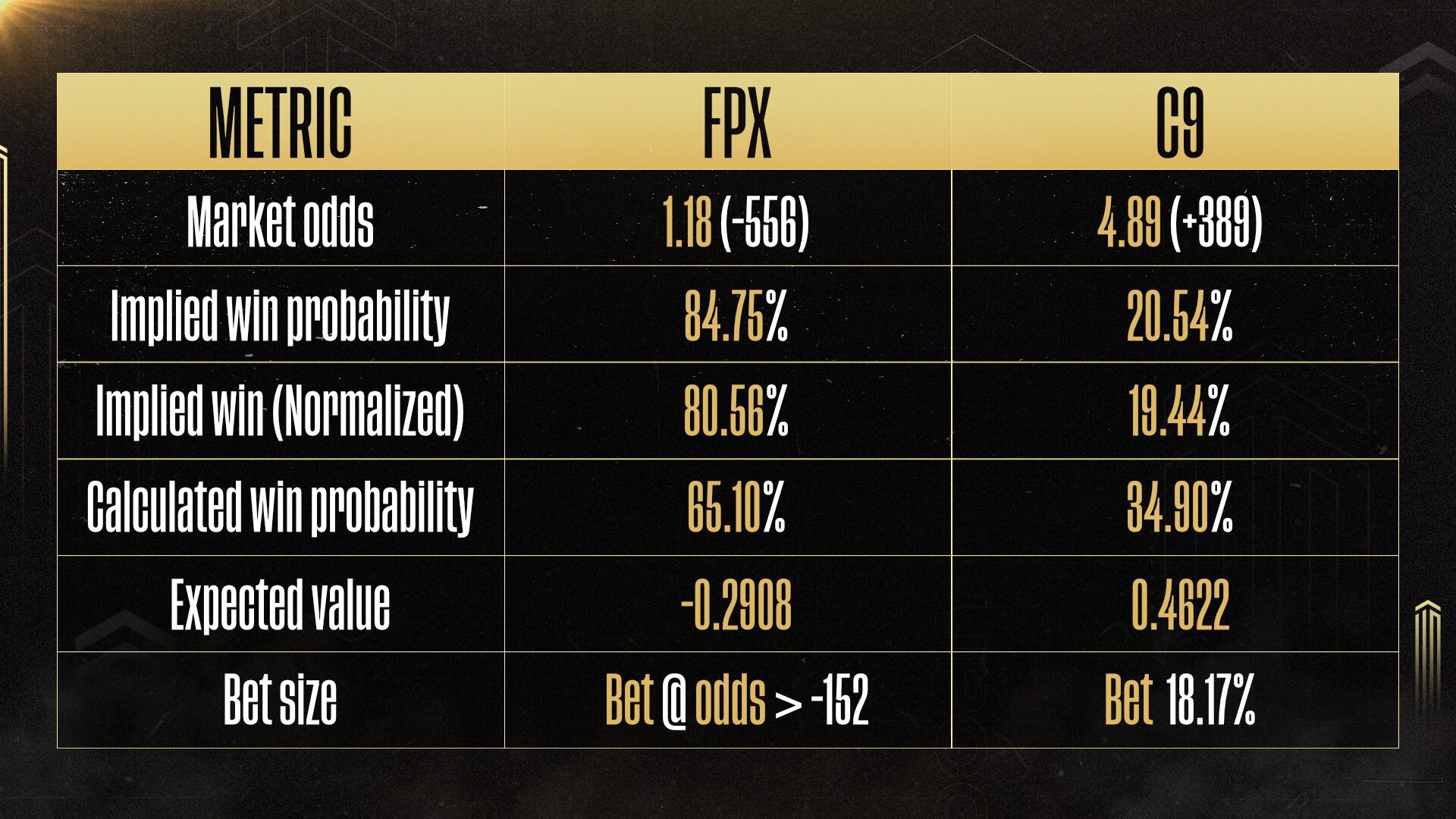 On Tuesday, Cloud9 took a very close loss against FunPlus Phoenix. They were always unfavored, but the possibility of an upset is still there. The odds market is pricing that possibility at about 19%, while I think it’s closer to 35%. C9 have shown that they know how to compete at this level, and quintupling your money makes a bet very tantalizing.

Rather than tick through regular metrics and regions and whatnot, let’s just focus in on that prior match:

At the end of the 36-and-change minute match, C9 lost while ahead on both gold and towers. They accrued an early gold lead, bled it out over the next ten minutes, and then in a single fight regained it. This doesn’t really sound like a team facing an 80/20 favorite.

C9’s support, Philippe “Vulcan” Laflamme, has admitted that he feels their “mid-game has been pretty lackluster,” which is exactly what happened here. Hopefully, they’re better prepared to face this situation tomorrow, and pull off the unexpected. If they can continue to play to their strengths in the early game, and have learned from their experiences and can hold on to that advantage going into the mid and late game, they should have much better than a 20% chance to redeem themselves.

This is still a long shot, don’t get me wrong. One in three is still a losing proposition. However, it’s a hell of a lot better than one in five, and the windfall for a Cloud9 victory makes this a very attractive bet.