Provided by Lance Skundrich for Riot Games Despite having a close match ahead of them tomorrow, Gen.G are still worth a potential bet.

Just watching esports can be a thrilling experience, but nothing ups the stakes like putting something extra on the line. At the same time, figuring out which 2021 League of Legends World Championship group stage games to bet on and how much money to risk is no small task.

That’s where I come in. At alacrity.gg, I built a machine learning model and trained it on more than 35000 professional League of Legends matches to predict each team’s probability of winning in any match. Squared up against the odds market, we can find matches that generate positive-value bets.

As the group stage plays out, I’ll come back every day with a few highlights of interesting matches and worthwhile bets. Here are my Day 2 picks. 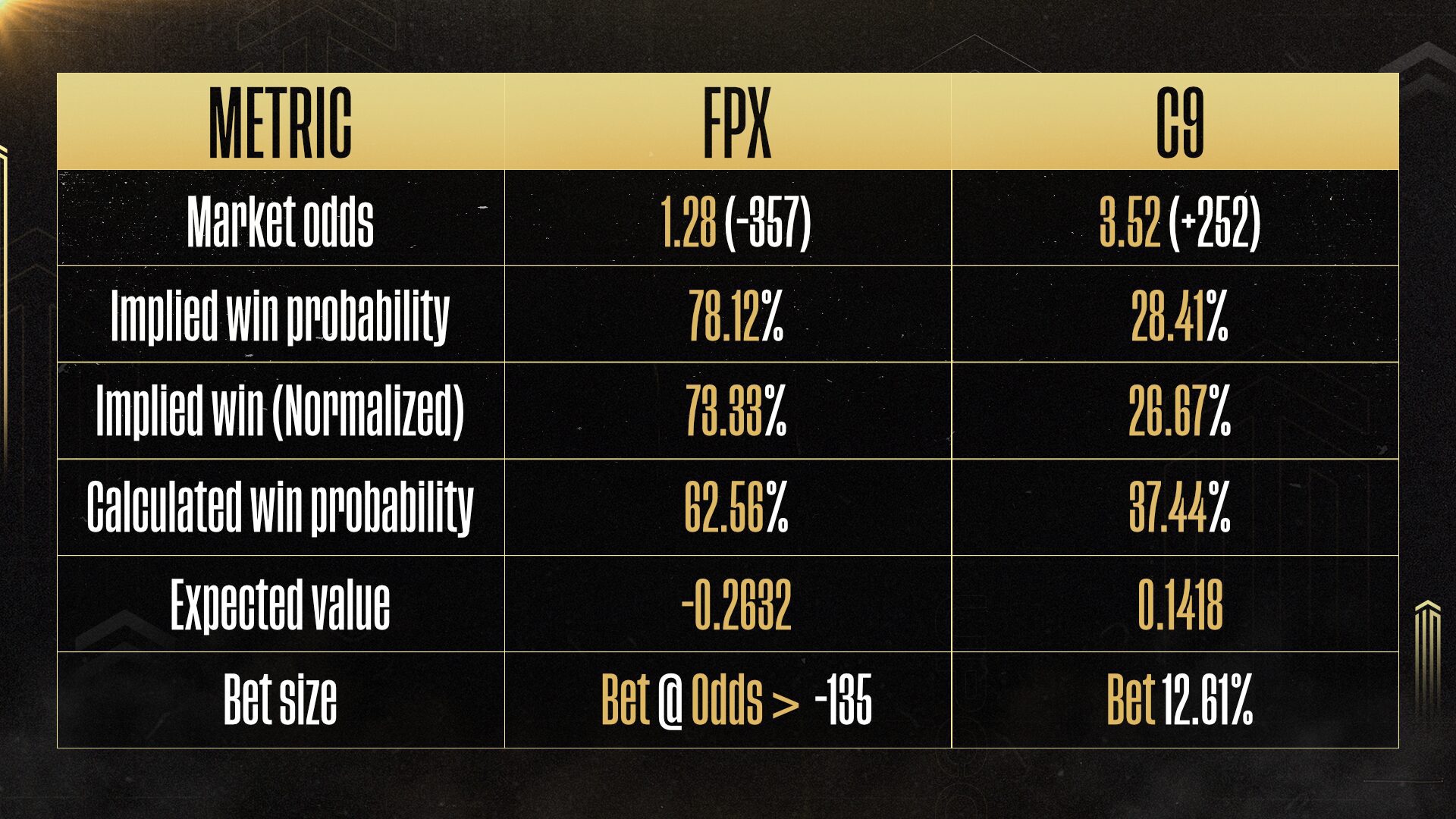 In group A, Cloud9 face off against the odds market’s overall favorite (before matches started) to win Worlds, FunPlus Phoenix. This one tilts pretty heavily against the North American team, but my model thinks they’ve got at least a chance.

The market puts this at 73/27 in FPX’s favor while I have it at 63/37. That’s a substantial difference and creates some room to find betting value. We’re still betting on the underdog and are more likely to lose than to win, but a small wager can find some outsized returns in the event of an upset.

These two teams are more evenly matched than you might think. They have similar win rates (though FPX skew a bit higher, even within their tougher region), similar margins of victory, similar Kill/Death/Assist stats and similar overall experience. Some of these may tilt toward one team or the other, but, in isolation, these teams could give each other a run for their money.

The difference maker almost entirely comes down to region strength. China has a legacy of strong performances in international competition, and FPX achieving all of those above-mentioned statistics in the historically strongest league is no small feat. North America simply lags behind.

NA is still an above-average-strength region, however, which feels like it gets commonly glossed over. It may be the weakest major region, but it’s not completely left in the dust by the powerhouses.

So, while I agree that Cloud9 are the underdog here, their chance to pull off an upset deserves more than just lip service. I wouldn’t bet the house, but a relatively small stake can pay large dividends. 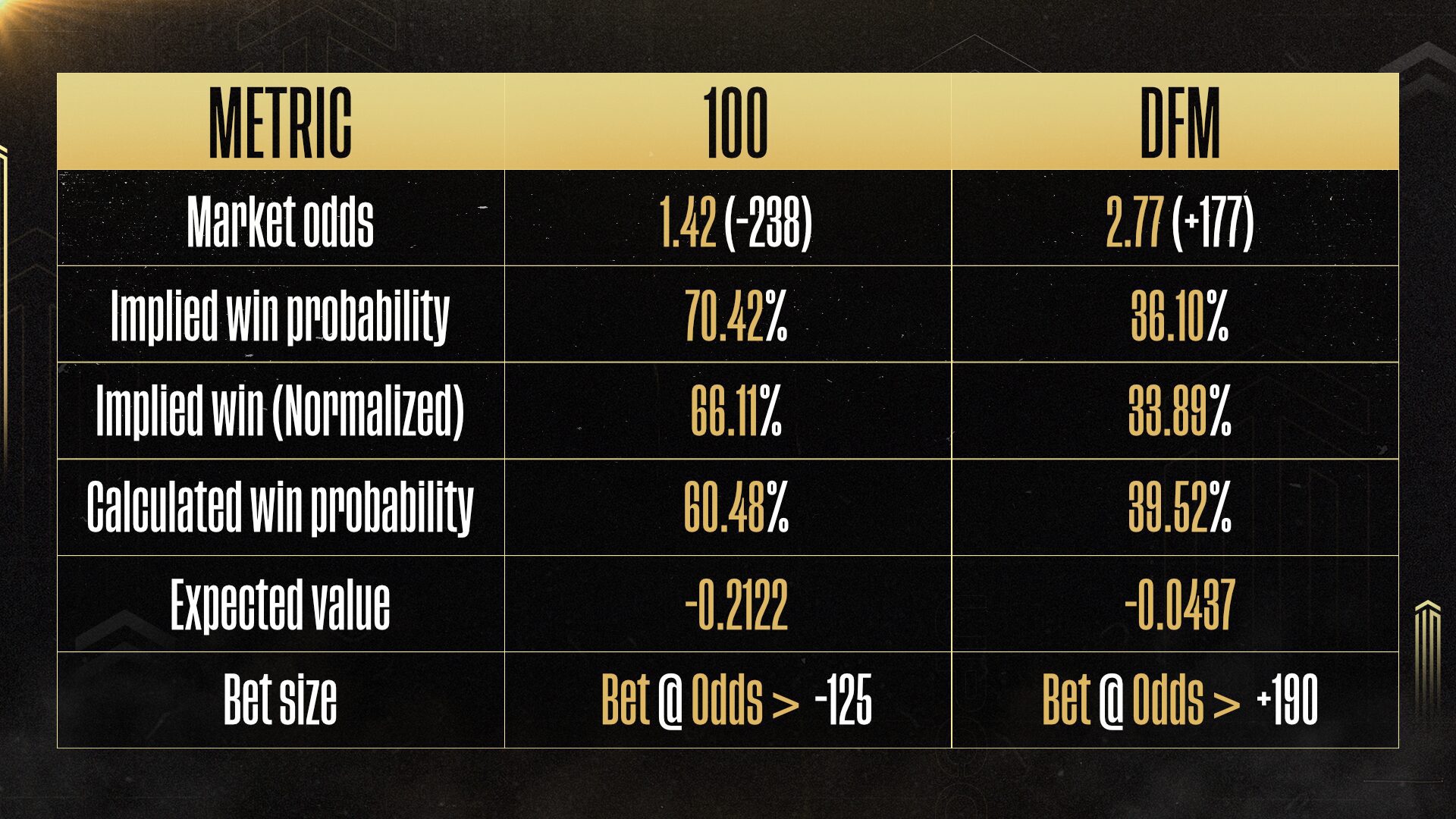 Group B sees the first Japanese team at Worlds groups, DetonatioN FocusMe, battling LCS champions 100 Thieves. Odds peg this at around 66/34 in 100 Thieves’ favor, while my model puts it at closer to 60/40. Not enough of a difference to be worth betting on the underdog, as the vig just eats into profits too much, but there’s at least some hope for DFM.

DFM look quite strong on paper. They completely dominated the League of Legends Japan League, and all of their players have above a 65% win rate in their professional careers. They’re natural brawlers with impressively high kill counts.

The fact remains, unfortunately, that this high level of success in the LJL does not naturally translate to international competition. This is a classic “big fish in a small pond” scenario, and DFM have not truly been tested outside of their home turf. To their credit, they did beat Cloud9 in a play-in tiebreaker, after an initial loss to them during the round robin. If they can find a way to play the game their way, they might be able to make some headway internationally.

Until they’ve proven that capability, though, they’ve got a tough road ahead of them. Without any strong reason to believe they’re better than given credit for, I’d avoid a bet on this match. 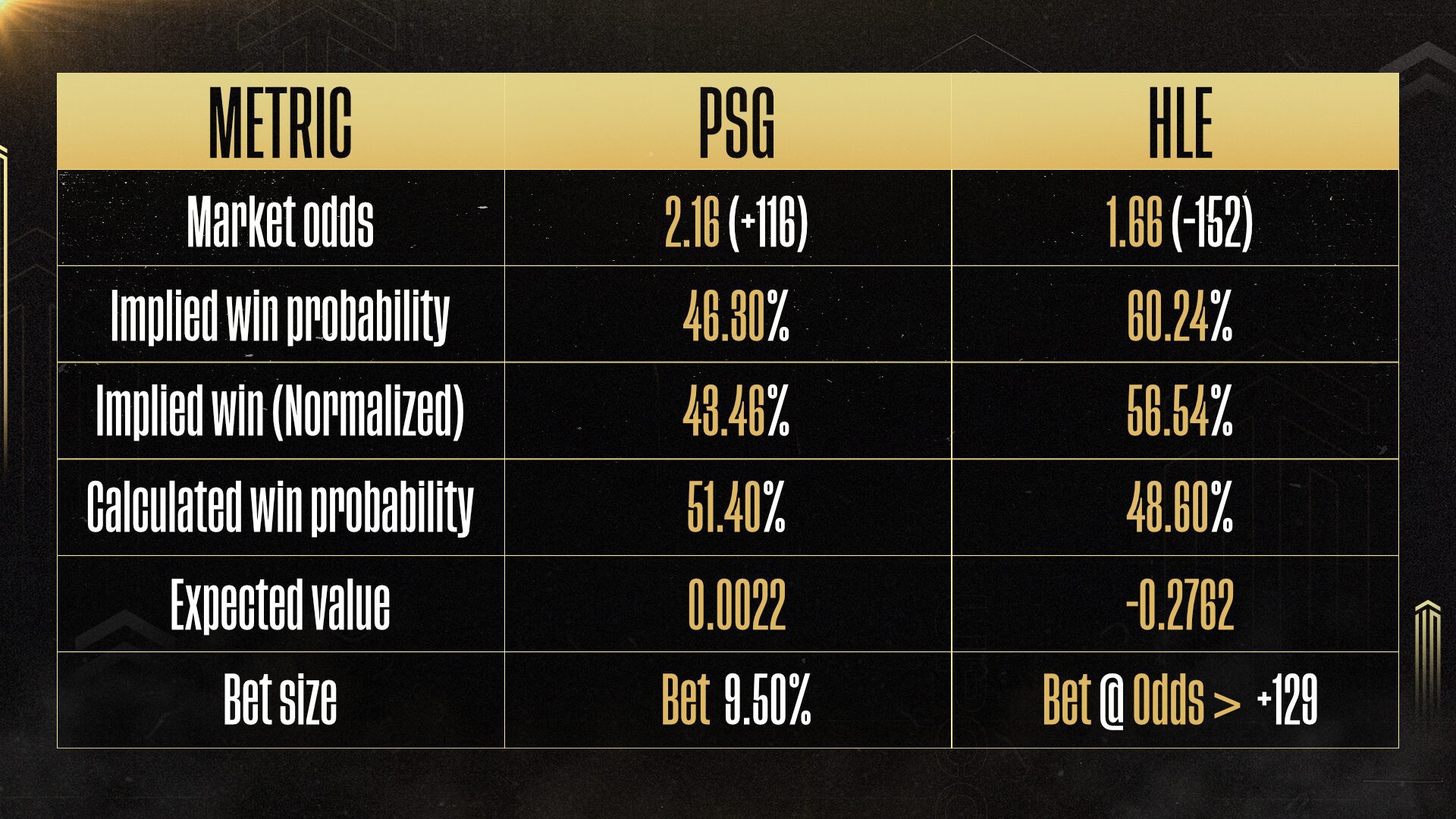 PSG Talon meet Hanwha Life Esports in Group C. The odds market has faith in the Korean squad, giving them a 56.5/43.5 edge. My model finds PSG to actually be very slightly favored. This is still not a huge disparity, but an above-even-odds payout for what is essentially an even odds game is still worth placing a small bet on.

This is a somewhat unique case of HLE being from an obviously stronger region, but PSG being so dominant in theirs that treating them as representative of the Pacific Championship Series feels unfair. Players in a well-balanced region don’t typically maintain 66-72% win rates. PSG have also maintained a very consistent roster, and their performance as a team surpasses even those absurdly high individual win rates.

The tug of war between the relevance of local dominance versus regional differences is difficult to assess, but it’s clear that both are worth paying attention to. In this instance, PSG just slightly wins that tug of war and thus is worth a small bet. 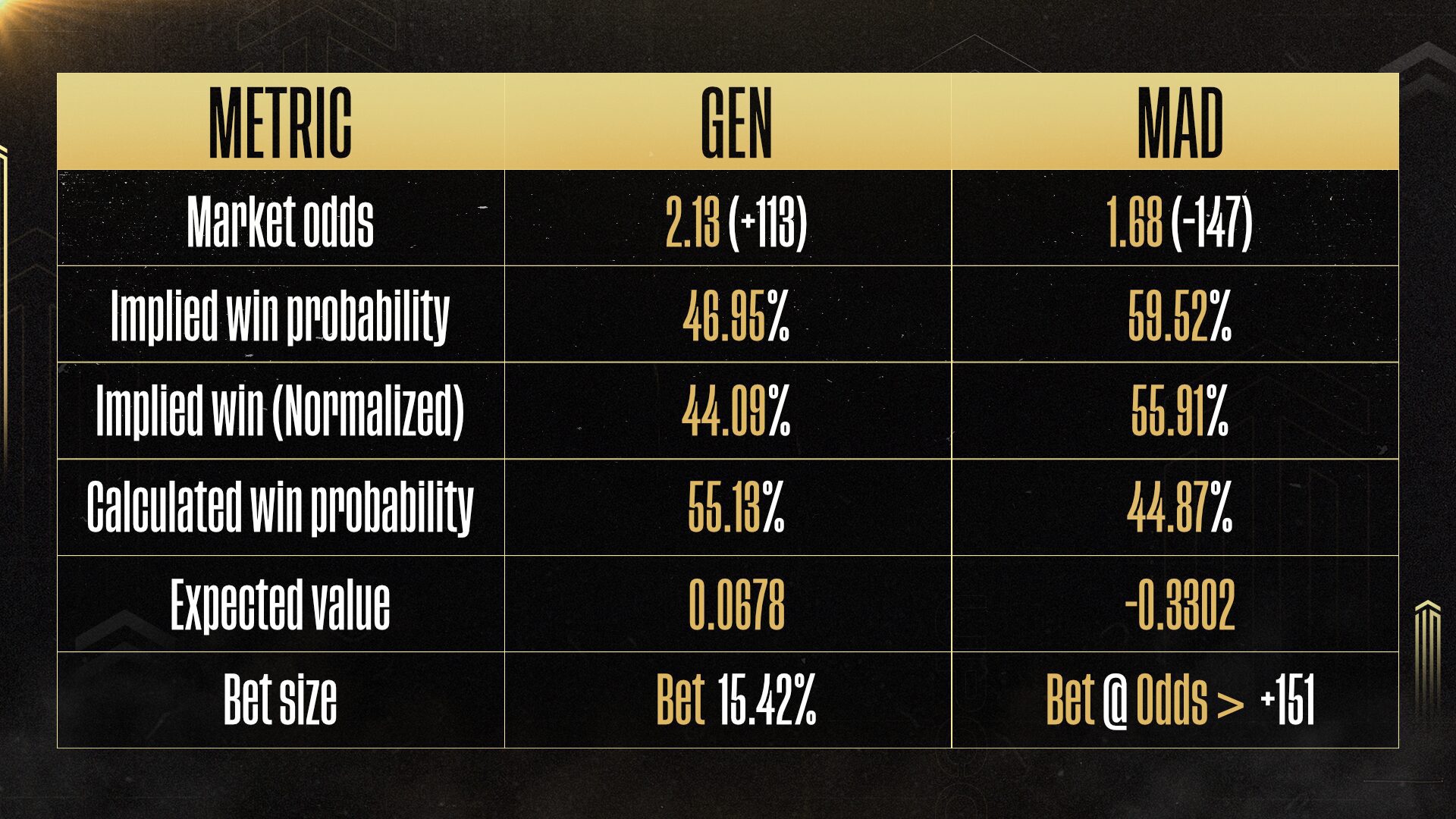 Last but not least for today’s slate of predictions, Korean runners-up Gen.G meet European champions MAD Lions. Both teams are strong contenders this year; my power rankings had them in fifth and sixth places overall, respectively.

My view on this match is roughly the inverse of the market. My model places GEN at 55/45, compared to the 44/56 implied by odds. This is enough of a disparity to be worth a bet. A coin flip doesn’t necessarily leave you with a lot of confidence, but a slightly unfair coin with a slightly tilted payout still leads to an EV-positive bet.

These two teams trade off on advantage for just about every factor, so it mostly comes down to book keeping and adding up all of the small parts. MAD have slightly higher average win rates but a less consistent roster. Both teams play to their teammates’ strengths reasonably well. GEN win their games with a bit more total advantage, but Europe has been a marginally stronger region this year.

When all of these factors combine, you end up with a very even matchup. GEN come out slightly ahead, and therefore deserve a modest wager.