Team Dignitas have been without a CS:GO roster since MSL, K0nfig, Magisk, Rubino and Cajunb left the team to join ‘North’. In recent days, the rather prestigious organisation has picked up another group of players; the important difference being that these 5 are an all-female group. 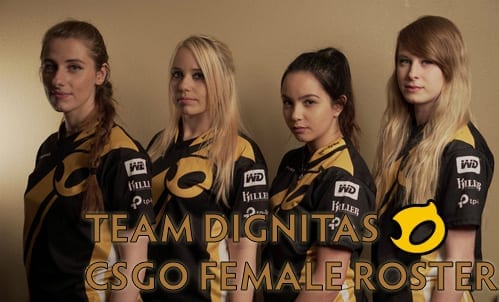 Female teams are not uncommon in eSports nowadays. Other famous organisations such as CLG, Team Secret and Vexed all have female rosters as well as male – although CLG and Vexed have a male team as well (Secret have a male Dota 2 team). Dignitas differ from these organisations since they still lack a male roster and don’t appear to be remotely close to acquiring one.

Ever since the BBC “100 Women” article fiasco, the female CS scene has been rather quiet. Ironically it was K0nfig, a member of the ex-dignitas squad, that pointed out the obvious flaw in the “sexism in eSports” theory:

“I dont get why girls blame us guys for them not being in our tournaments?
They can simply just qualify through an open qualifier????” – Kristian Wienecke

Personally, I find it rather odd that a scene as disinterested in gender as the eSports scene still has specifically all-female teams and tournaments. Dignitas could conceivably shift their entire CS:GO focus to this new roster and enter open qualifiers for any tournament they desire to. Instead, Dignitas.fe appears to be somewhat of a secondary roster (otherwise it would just be called “Dignitas”).

It is indeed possible that the best players of the new female team may be moved to the ‘first team’ in future provided it would strengthen the lineup. However for the present, Dignitas.fe are the only team playing under the Dignitas brand. We shall see whether they show any promise or not in the very near future as they are competing in the Intel Challenge Katowice, which runs alongside the IEM tournament.