Anders and Moses are both confirmed, Thorin absent.

The talent list for the StarLadder Berlin Major from August 23-September 8 has been announced. Currently, there are 24 teams that are competing for a piece of the $1,000,000 prize pool and to be crowned the winners of the second Major of 2019. 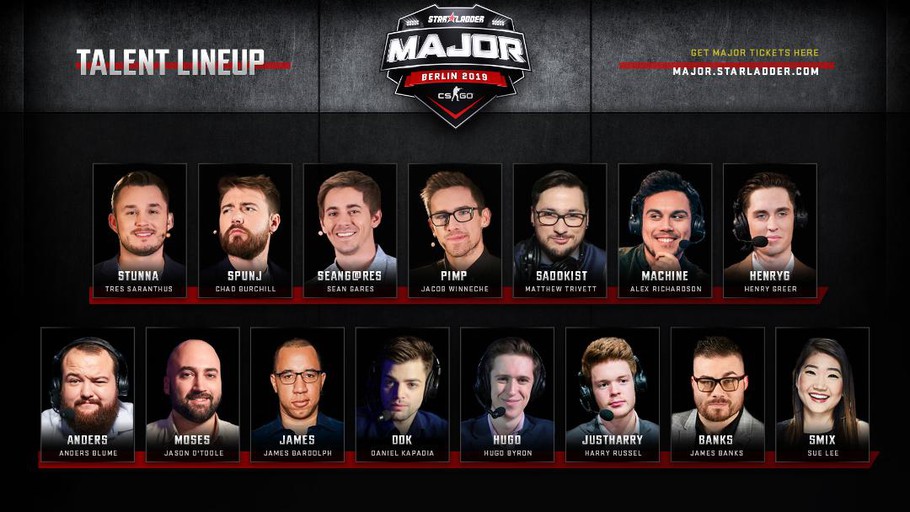 Originally reported by Dekay from Dexerto, some long-standing members of the talent line-up were set to not be participating at the StarLadder Berlin Major. This included the casting duo of Anders Blume and Jason "moses" O'Toole alongside analyst and journalist Duncan “Thorin” Shields. As the report was published, this news was heavily criticized as these members have attended several Majors in the past.

Then, Dexerto reported once more that StarLadder have reconsidered its decision regarding the members of talent. However, it has now been confirmed that both moses and Anders will be participating, but analyst and long-standing journalist Thorin will not.

The analysts from the last Major, IEM Katowice 2019, has remained the same. However, casting duo Matthew “Sadokist” Trivett and Henry "HenryG" Greer will reportedly be split for this Major, but both have been announced as casters. Sadokist has clarified that he will be the desk host.

The StarLadder Berlin Major is broken into three main stages. The first stage is the new challengers stage from August 23-26. There are 16 teams, with only 8 of them being able to qualify for the next stage. This is the New Legends stage, which contains the current teams with Legend status from the previous Major, IEM Katowice 2019. These teams finished in the top 8. This stage is from August 28-September 1. Finally, the championship stage will commence from September 5-8 in order to crown the champions of the StarLadder Berlin Major.