Offset has teased a potential investment in FaZe Clan

Rumors have been circulating in regards to Offset’s ties to FaZe Clan since The Director of Business Development for FaZe Clan, Clinton Sparks, posted a video on his Instagram story with the rapper tagged. The caption read, “#Meetings, FaZe Clan, @Offsetyrn, @CallofDuty”.

This resulted in the community speculating FaZe Clan’s involvement in the franchised Call of Duty League next season but also the rapper’s involvement with the team. After the story was posted, Offset followed the official Call of Duty World League and the MLG Twitter accounts. 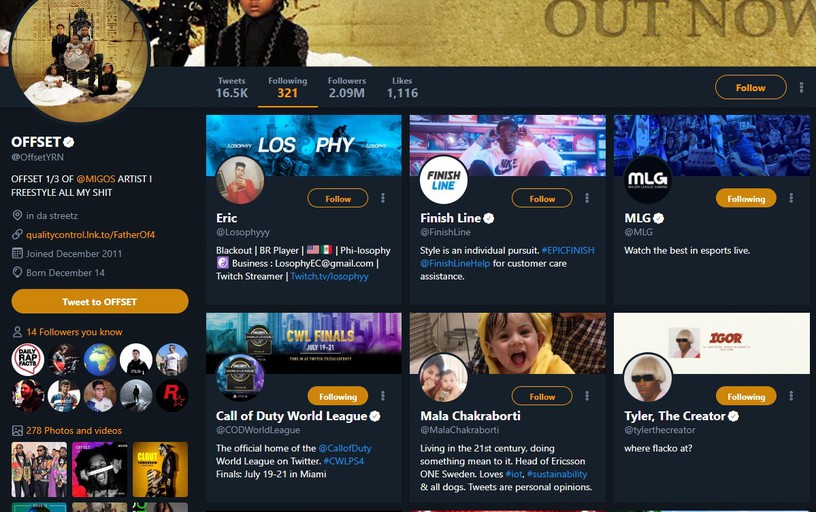 Furthermore, Offset jokingly replied to another question regarding his favorite Television show to be Call of Duty.

However, current FaZe Clan Call of Duty professional Matthew "skrapz" Marshall replied to the tweet, asking him as to whether he would want to play League play with him, which is a gamemode within Call of Duty: Black Ops 4 and has been synonymous with the franchise.

This would certainly not be the first time an American hip-hop artist has invested into an esports organization. For example in April 2019, award-winning Toronto singer Abel “The Weeknd” Tesfaye officially invested into Splyce’s parent company OverActive Media. Most famously in October 2018, Canadian rapper Aubrey “Drake” Graham co-led 100 Thieves’ Series A funding round, becoming a prominent investor and strategic adviser.

With a potential investment from Offset on the horizon, FaZe Clan may be entering the Call of Duty 2020 franchised League, with spots rumored to cost around $25 million.

This information has not yet been confirmed.