Activision Blizzard prepares to announce the latest title for their blockbuster Call of Duty franchise.

The official Call of Duty social media accounts “went dark” last night, replacing their header photos with flat black images and updating their profile pictures with a revamped Call of Duty logo in preparation for the announcement of the upcoming CoD title. These changes were applied to the CoD Twitter, Facebook, and Instagram pages, though the Call of Duty YouTube channel’s profile image remains unchanged at this time.

Additionally, all CoD social media accounts have refrained from sending new posts since last Friday, and the official Instagram account has archived all of its older images, leaving behind an eerily empty feed. 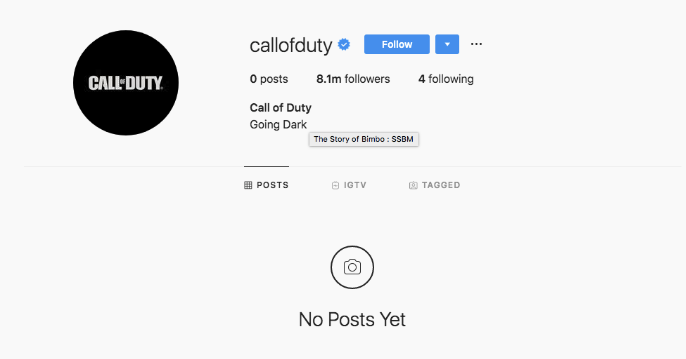 We already know the name of the 2019 Call of Duty title: it’s Modern Warfare, a return to—or, according to some sources, soft reboot of—one of Activision’s most beloved CoD subseries. At the moment, the name is the only confirmed detail of the new game to have leaked to the press, but Eurogamer’s sources indicate that more information will be revealed in an official announcement this Thursday. Since a Remastered edition of Modern Warfare came out only a few years ago, it’s likely that the upcoming release will be more than just a visually enhanced update to the older title.