100 Thieves gets a shoutout from Drake for their big win.

Popular musician Aubrey “Drake” Graham hopped on social media last night to give a shout-out to 100 Thieves’ Call of Duty: Black Ops 4 squad. The rapper’s congratulatory message came in the form of an Instagram story posted only hours after 100 Thieves took home the gold at CWL London. 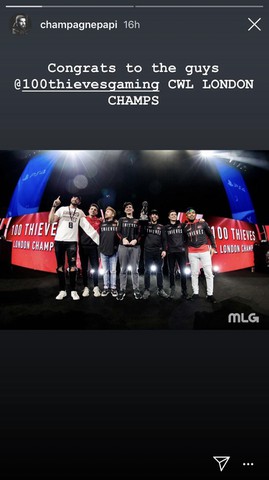 It’s no surprise that Drake was following 100 Thieves’ progress at the CWL event, as he is one of the most high-profile investors who pitched in during the team’s Series A funding round in October. After Drake first appeared on Tyler “Ninja” Blevins’ stream last March, the musician’s decision to invest in an up-and-coming organization showed his belief that esports is here to stay.

100 Thieves’ victory over the weekend also quieted some pundits in the esports world who had cracked jokes about the infamous “Drake Curse” preventing the team from attaining victory after the rapper invested in them.

CWL London was 100 Thieves’ best result yet in Call of Duty, and the team’s first-place finish would surely have raised their profile whether or not Drake chimed in. But Drake’s Instagram account boasts 58.6 million followers—far more than 100 Thieves’ total combined social media presence—and his involvement exposes the team to droves of fans whose first impression to esports may have come through the rapper’s Instagram story.